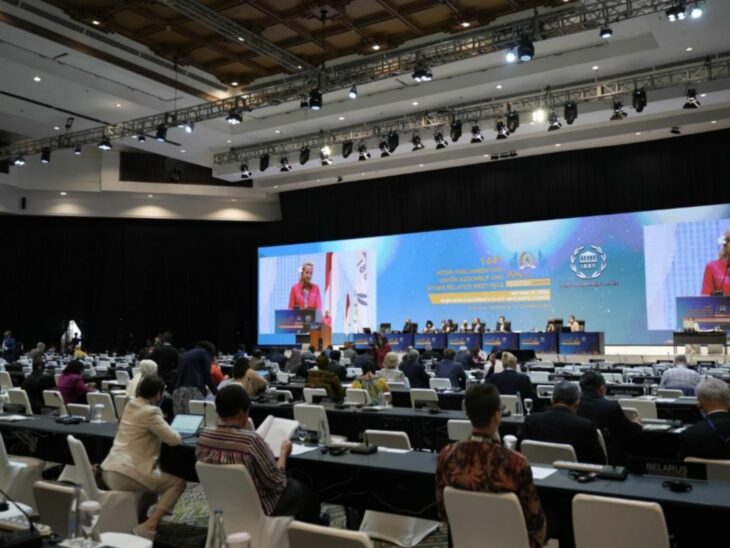 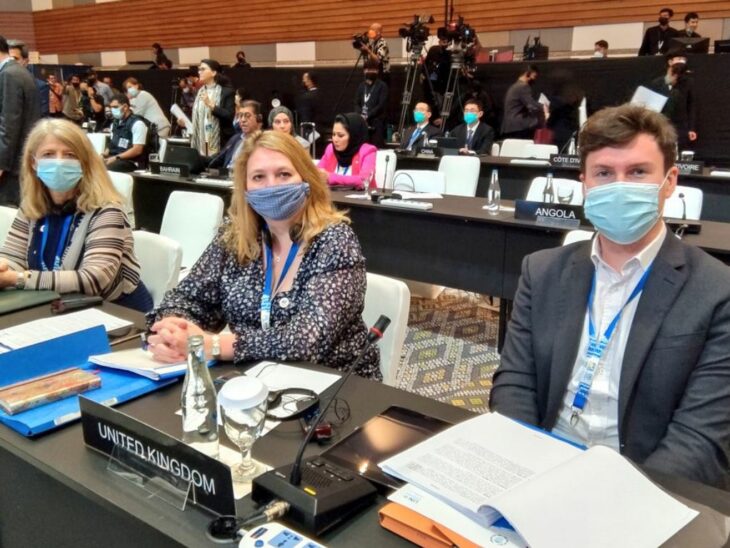 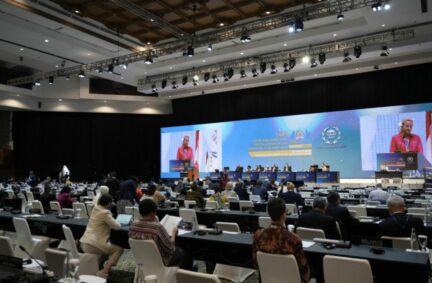 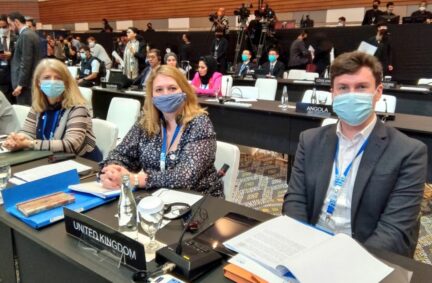 In one of the first major in-person events in the region since the beginning of the COVID-19 pandemic, the IPU and the Indonesian Parliament were able to convene hundreds of parliamentarians from around the world, including 30 Speakers of Parliament. Strict health protocols allowed the Assembly to take place safely.

Nearly 39 per cent of MPs attending were women, close to the absolute record at an IPU Assembly. Almost 27 per cent of participating MPs were under 45 years old, an absolute record for an IPU Assembly. This demonstrates that a new generation of young parliamentarians are starting to emerge, encouraged by the IPU through incentives such as the “I say yes youth in parliament!” campaign.

Following the adoption by consensus of the resolution emanating from an emergency item on the war in Ukraine, the Assembly also considered the following points.

The Assembly concluded with the adoption of the Nusa Dua Declaration, in which the world’s parliamentarians recognized the urgent need to address the climate crisis. The declaration outlines the national action parliaments need to take to implement the Paris Agreement, including accelerating the transition to clean energy, ensuring the inclusion of marginalized members of society and enhancing global cooperation for joint climate solutions.

IPU President, Duarte Pacheco, said: “The time to act is now. Time is running out. Scientists and researchers from all over the world have documented what has been described as an atlas of human suffering and a damning indictment of failed climate leadership. This 144th Assembly must mobilize all parliamentarians. We must lead by example and take resolute action before it is too late. Fellow parliamentarians, let us not fail our citizens and the young generation, who have placed their trust in us!”

The Speaker of the House of Representatives of Indonesia, Puan Maharani, said: “International commitments mean nothing if they are not translated into national implementation. Parliaments must formulate national legal instruments, appropriate budgets, and carry out oversight of various international commitments. Parliaments need to mobilize emission reduction, strengthen adaptation efforts, and realize financing pledges for developing nations.”

During the Assembly, IPU Members highlighted their national progress on climate change and the measures they are taking to accelerate decarbonization. They heard direct testimony from Samuelu Penitala Teo, the Speaker of Tuvalu, a country already greatly affected by rising sea levels and changes in weather patterns.

Against the backdrop of the war in Ukraine, the Assembly adopted a landmark resolution on Rethinking and reframing the approach to peace processes with a view to fostering lasting peace.

The resolution calls on parliaments to ensure that peace processes are as inclusive as possible, taking into account all sides and including the voices of women and youth.

The resolution refers to the need for parliamentarians to establish mechanisms through which all those who are impacted by conflict, including the most vulnerable, can register their grievances, perpetrators are held accountable, and victims are accorded justice.

The Assembly also heard from the Executive Secretary of the Comprehensive Nuclear-Test-Ban Treaty Organization, Robert Floyd.

In the current context of heightened security concern, Robert Floyd appealed for universal adherence to the treaty to reduce the threat of nuclear testing and weapons.

To date, 185 countries have signed, and 170 parliaments have ratified the treaty, which has not yet entered into force. To do so, it must be ratified by all 44 countries listed in the Treaty’s Annex 2, of which eight are still missing.

More tools and blueprints for parliamentarians

The Assembly also adopted a resolution on Leveraging Information and Communication Technology as an enabler for the education sector, including in times of pandemic.

The resolution aims to build on the experiences of remote learning, especially during the COVID-19 pandemic, and expand access to education. It looks at issues from Information Communication Technology literacy to teacher needs and infrastructure. Special attention is paid to how parliaments can promote more inclusive education through their legislative and budgetary functions.

The IPU launched two new products for the parliamentarians at the Assembly:

.   The third Global Parliamentary Report, published in partnership with the United Nations Development Programme, which, based on two years of in-depth research, examines how parliaments are engaging with the communities they represent.

The UK was represented at the 144th IPU Assembly by BGIPU Chair, Harriett Baldwin MP, Dan Carden MP, Rt Hon Karen Bradley MP, Anna McMorrin MP, Richard Holden MP and Lord Rennard.  In addition to extensive informal exchanges in the margins of the Assembly, the UK delegation had formal bilateral meetings with the host parliament, Indonesia, as well as parliamentary counterparts from Poland, Norway, Finland, Estonia, Latvia, Rwanda, Germany, Egypt, Mexico and deposed MPs from Afghanistan as well as a trilateral exchange with Australia and New Zealand .  The latter two delegations also joined UK counterparts in paying tribute to the memory of the victims of the Bali bombings at the official memorial site in Kuta some two decades after the terrorist attacks in which citizens of all three countries, as well as many others, so tragically perished. 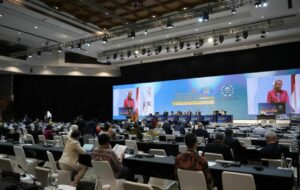 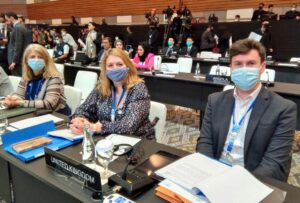