The BGIPU AGM was held on Wednesday 30 November in the IPU Room with Mr Speaker in the Chair. The 2022 Annual Report was adopted and a new Executive Committee for 2022/23 was elected.

The Annual Report of the BGIPU for 2022 was published on 9 November 2022 in advance of the 30 November AGM: 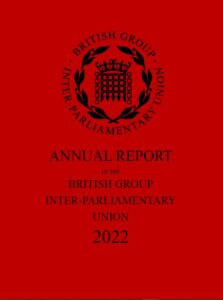 BGIPU’s activities are guided by a three-year Strategic Business Plan 2022/23-2024/25 adopted by the Executive Committee on 7 June 2022 in line with the requirements set out by our funding bodies in the Financial Memorandum.

The current Strategic Plan is available for download by clicking on the image below; 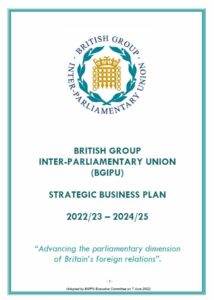 Governance of the BGIPU is exercised through a 26-member Executive Committee (ExCo), appointed by its entire membership. The ExCo manages a Forward Programme of engagement with counterpart parliaments under the auspices of the Inter-Parliamentary Union (IPU).

The Executive Committee is led by the Chair, three Vice-Chairs and a Treasurer. They are appointed annually at the Annual General Meeting (AGM) as stipulated in the Rules of the BGIPU. It is supported by a Secretariat, led by a Director, a Deputy Director and programme advisory and management staff.

Arrangements for funding Inter-Parliamentary Groups in the UK Parliament have evolved over many years. While funding of the BGIPU originally came from member contributions, and later the FCO and Treasury, in recent years the funding has been provided directly by both Houses of Parliament with 70 percent from the House of Commons and 30 percent from the House of Lords.  Public funding of BGIPU’s activities, including its annual membership contribution to the IPU is legislated through the International Parliamentary Organisations (Registration) Act 1989.

A Financial Memorandum (FM) was first produced in 2009 to underpin this funding relationship. The current financial memoranda requires the preparation of detailed and costed annual business plans, regular reports of outturn figures and limits on reserves as recommended by Internal Audit. BGIPU is also required to follow specific administrative, financial and human resources policies, analogous to those currently held by the House of Commons and the House of Lords, but proportionate and relevant to BGIPU’s own unique circumstances.

Financial oversight is exercised by a twice-yearly Audit Committee selected from members of the Executive Committee. The BGIPU also has an annual external audit, with authorised financial statements, an explanatory commentary, and a key issues memorandum presented to the Audit Committee in mid-year for consideration and referral to the Executive Committee.  In accordance with the rules of the Group, the BGIPU produces an Annual Report, comprising report and summaries of activities and financial reporting, in advance of the Annual General Meeting and from time to time undergoes a periodic internal audit by funding bodies from either House of Parliament.