Home » Activity Reports » 25 years after the Beijing Declaration, over 25% of MPs are now women

25 years after the Beijing Declaration, over 25% of MPs are now women

Women protest in front of the Swiss Parliament during a nationwide women’s strike for gender equality. © Stefan Wermuth AFP

Report from 6 March 2020: A quarter of a century after the United Nations Fourth World Conference on Women in Beijing, the overall percentage of women in parliaments has reached 24.9 per cent in 2020, up from 11.3 per cent in 1995. In four countries (Rwanda, Cuba, Bolivia and the United Arab Emirates) women now account for 50 per cent or more MPs in their lower or single chambers compared with 1995 when no parliament had reached gender parity. Gender quotas remain critical success factors for women to be better represented in parliament, especially young women.

The IPU has tracked women’s participation in parliament for decades, allowing it to monitor historical trends, progress and setbacks. This year’s IPU report looks back at 25 years of women in parliament on the occasion of the 25th anniversary of the Beijing conference and its ground-breaking action plan for gender equality.

The last 25 years have seen a significant increase in the proportion of women in parliaments around the world, with the share of women in national parliaments reaching almost 25 per cent globally. Rwanda, the United Arab Emirates and Andorra have made the greatest progress with +57, +50 and +42.8 percentage points gained respectively in their lower or single chambers between 1995 and 2020.

Twenty-five years ago, eight out of the top ten parliaments with the highest representation of women were European, mostly in the Nordic countries. Today, the ranking has changed considerably, with more regions represented. 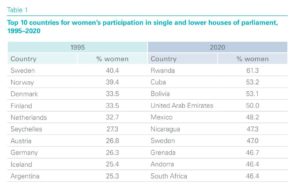 IPU President and Mexican MP Gabriela Cuevas, said: “As only the second woman presiding the IPU and the youngest in 130 years, I am convinced of the urgent need to have more women in parliament. It is not enough to have only one in four seats in parliaments; it is not fair that some countries are leaving women behind because of the absence of institutional changes to give them real opportunities to participate in politics; and it is not democratic to pretend that a parliament is truly inclusive if women are not fully represented.”

President of the IPU Forum of Women Parliamentarians and Kenyan MP, Susan Kihika said: Our objective is full gender parity in parliament for all countries in the world. With so few parliaments reaching gender parity in 2020, we still have a long way to go. It will take stronger political will and concrete action by both women and men to speed up progress. More women in parliament leads to better decision-making, more peaceful societies, and more representative democracies that work for everyone.”

IPU Secretary General, Martin Chungong said: “Men and women have a joint responsibility to achieve gender equality. Parliamentary leadership has become increasingly aware of this imperative. Around the world we see that male politicians, particularly male Speakers of parliament, are key allies in supporting women MPs and in shaping more gender-sensitive institutions that help women get ahead in politics.”

Of the 20 countries with the largest share of women in parliament, 16 apply some form of quota. The IPU also notes that 81 countries now hold elections that include legislated gender quotas. The two leading regions – the Americas and Europe – were pioneers in the introduction of quotas for women. These quotas have grown in ambition and efficiency: they are no longer designed as a means to reach a minimum threshold of women candidates or members of parliament, but rather as a strategy to ultimately reach gender parity.

On the flip side, the share of women in parliamentary chambers without quotas is considerably lower. In parliamentary elections held in 68 chambers in 2019, women gained 30.3 per cent of seats on average in the 40 chambers that applied quotas – either legislated or applied voluntarily by political parties. This compares with only 17.9 per cent of seats that were won by women in the 28 chambers that still do not have quota systems.

Progress in all regions of the world over 25 years

1.  Americas: Long-standing equality measures have yielded sustainable results, with women’s representation in parliament increasing at a faster pace in the region than elsewhere. The Americas are the first region to go above the 30-per-cent threshold, with 31.3 per cent of MPs who are female.

2.  Europe has made sustained progress but is no longer the leader despite the Nordic countries being the only sub-region to have women holding over 40 per cent of parliamentary seats. Women MPs in Europe are now just 0.1 percentage points short of the 30-per-cent threshold prescribed in Beijing 25 years ago.

3.  Sub-Saharan Africa is the third region in terms of representation of women in parliament, largely thanks to quotas. At the beginning of 2020, 24.4 per cent of the region’s parliamentarians were women.

4.  Middle East and North Africa: The region has made great strides since the removal of restrictions to women’s right to vote or stand for elections, and the introduction of quotas as part of political reforms after the Arab Spring. The share of women MPs in the region stands at 16.6 per cent.

5.  Asia: The region recorded the slowest growth rate of any region, having gained only 6.8 percentage points over the past 25 years. With 20 per cent of parliamentary seats held by women, Asia dropped from second place in 1995 to fourth in 2020.

6.  Pacific: Women’s parliamentary representation in the Pacific region is the lowest, coming in at 19.4 per cent in 2020. Despite substantial gains in a number of countries over the past 25 years, notably Australia and New Zealand, the region still counts the only three parliaments in the world with no women members (Federated States of Micronesia, Papua New Guinea and Vanuatu).

Empowering women MPs at the IPU

Women have played a key role at the IPU since the first women MPs attended an IPU conference in Stockholm, Sweden, in 1921. In the 1980s, the IPU created a dedicated structure, the Forum of Women Parliamentarians, to give women MPs a stronger voice in the Organization.

The IPU was also an early adopter of quotas in the 1980s, leading to a steady increase of women representatives in its governing bodies and meetings. Today, around 30 per cent of MPs who attend IPU Assemblies are women thanks to quotas as well as sanctions for less gender-equal delegations.

The IPU has had two women Presidents: Najma Heptulla (India) was elected in 1999 followed by the current President, Gabriela Cuevas (Mexico), in 2017. IPU Secretary General Martin Chungong was also recently elected Chair of the Global Board of the International Gender Champions, a leadership network that works to break down gender barriers.

Women protest in front of the Swiss Parliament during a nationwide women’s strike for gender equality. © Stefan Wermuth AFP