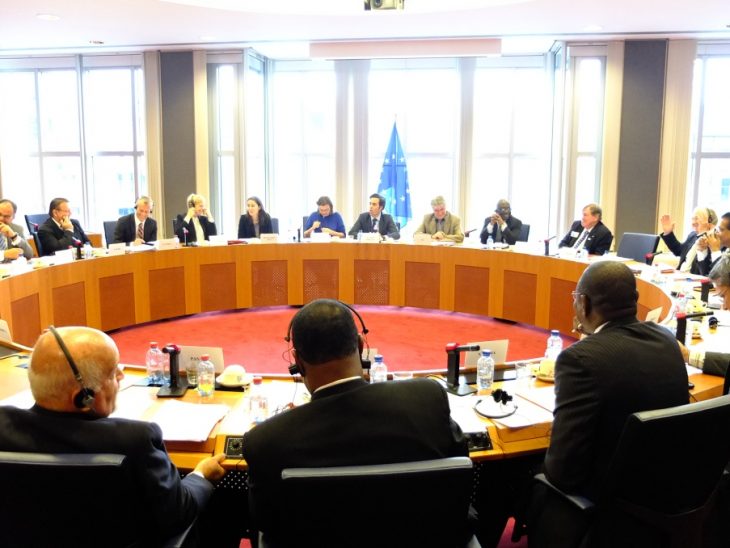 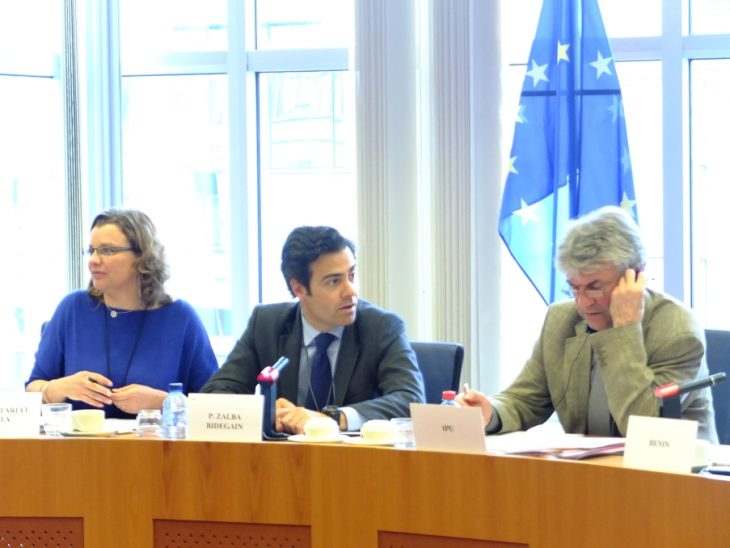 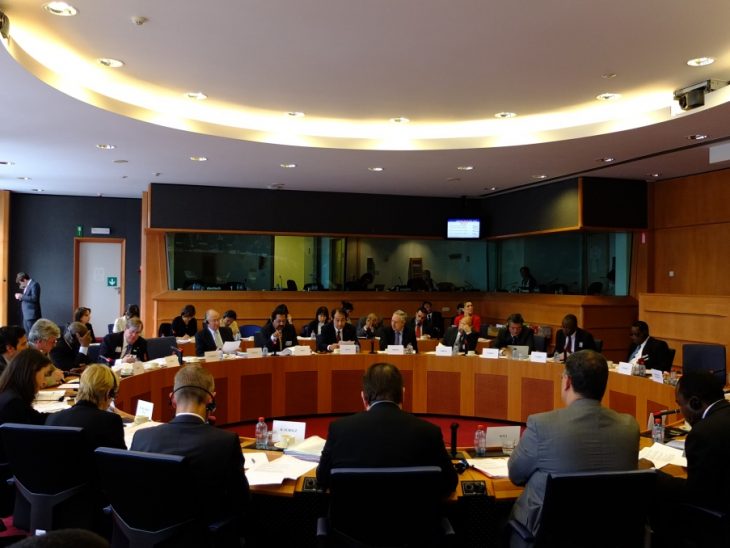 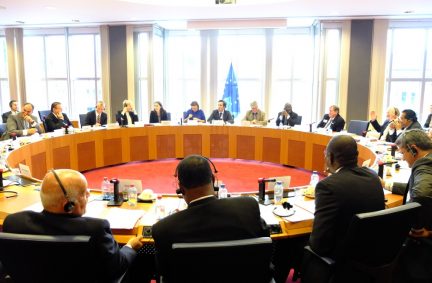 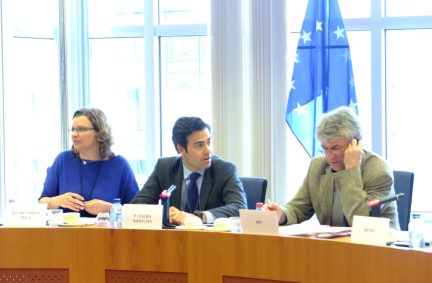 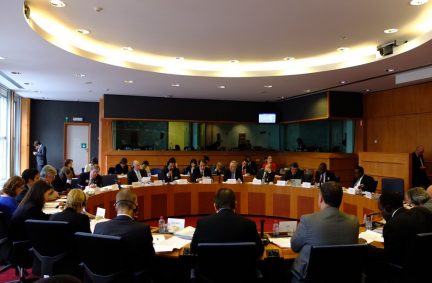 The Steering Committee meeting was held in Brussels in the European Parliament, who co-host the Parliamentary Conference with the IPU. The prime purpose of the Meeting was to prepare for the Bali Ministerial Conference in early December 2013. We met against the impending completion of Pascal Lamy’s tenure of Secretary General of the WTO and in advance of the assumption to this post of Roberto Azevedo, Brazil’s Trade Minister, who will take over at the end of August.

SG Lamy has been lauded in his tenure of the post, but major issues are still left unresolved in his wake. The principal concern is to revive the Doha Round, whose initial momentum for a multilateral approach has been lost. Alternatives of bilateralism, plurilateralism (where countries who agree a common agenda form a breakaway free trade area) and bi-regionalism (as in the prospective USA/EU trade talks) all rival the accepted formula of multilateralism.

Some believe that these separate routes are good because they lead towards an ultimate multilateralist settlement while others believe they lead away from that goal. It will be good to get guidance from the incoming Secretary-General who was strongly supported for the post by developing countries in preference to others backed by the developed world.

The first afternoon featured a welcome innovation. The IPU delegates attended a meeting of the European Parliament’s INTA or International Trade Committee under the experienced chairmanship of Vital Moreira. In the morning, the INTA Committee had quizzed Trade Commissioner, Karel de Gucht, over the Commission’s decision to take the Chinese to court over the alleged dumping of surplus solar panels on to the World Market. The Financial Times on the 29 May reported on the controversy which marks an interesting clash between the old and new order in International Trade (EU countries like Germany are less than pleased that the Chinese have been so challenged given the levels of exports Germany sells to China).

In the afternoon session, in the absence of our Canadian Chair, I was asked by the IPU Secretariat to co-chair the session with Vital Moreira. I did so and took the opportunity of thanking the EP for inviting us to view their proceedings and indeed for the later exchanges between the 2 groups of parliamentarians. After our Brazilian delegate reported on his pride that Brazil was succeeding to the post of WTO Secretary General, we had two agenda items: a report from former US Trade Negotiator and currently Deputy DG of the WTO, Rufus Yerxa, now a senior insider at the WTO, on the challenges that lay ahead for the WTO. He also attested to the advent of Roberto Azevedo who had been working for some years in Geneva. His self-description as “a diplomat being a person who thinks twice before saying nothing”, did not deflect the sustained and skilful questioning on trade matters within the WTO. Such thrusts included questioning the future of the WTO itself, its role and attitude to the proposed US/EU Trade bilateral agreement.

David Martin MEP sought answers on the WTO’s standpoint on the ever-growing digital economy, tax evasion and the Global Added Value Chain. One interesting statistic from Rufus Yerxa, charting the changing nature of trade flows, was the fact that South to South Trade now accounts for 30% of world trade, a sharp rise from the 10% trade of 20 years ago.

Two further presentations were made to the Committee on the recent publication of The Future of Trade: The Challenges of Convergence which had been produced by Pascal Lamy’s 12 independent experts (albeit criticised in some quarters for the lack of NGO representation). One of the 12 spoke and was followed by a view from the Commission. Not much excitement ensued within the room. The meeting closed and I thanked the INTA Chair on behalf of the IPU delegates.

The business side of the meeting took place on the 29th May, beginning with a tour de table on members’ reflections on the earlier INTA meeting and general musings on the current state of play in the WTO. Four MEPs and S. Gonzales, Senior Official from INTA sat at the table, including my old Austrian colleague Paul Rubig, who rightly spoke up vigorously for the important role SMEs have in promoting and effecting World Trade – a neglected dimension in my view.

Serguei Tchelnokov from the IPU introduced the subject of the Bali Ministerial Conference, noting it was likely to be attended by some 10,000 participants. He spoke of the potential difficulties for delegates to the proposed parallel Parliamentary Conference in accessing the Ministerial Conference, in contrast to NGOs which will (rightly!) have easy access to the main Conference. He suggested all delegates attempt to overcome this potential difficulty by attaching themselves to National Delegations.

Turning to the Agenda of our own Parallel Parliamentary Conference, two subjects were chosen. The first centred on post-Bali. Some delegates reflected the pessimistic mood that has gripped the WTO by declaring that Bali was unlikely to have many successes (trade facilitation perhaps) and so we need, as our colleague from Panama put it “an ace up our sleeve!” Others disputed this defeatist approach, understandably keen to maintain strong support for the multilateral approach.

The second subject for debate which I suggested was to air the pros and cons of maintaining an exclusive multilateral approach to trade liberalisation and to explore whether bilateralism and its variants might represent a path away or towards multilateral solutions. I noted that the discussion also raised concerns about how well we politicians were explaining trade liberalisation to our electorates. A colleague from South Africa pinpointed youth unemployment as a general scourge of our times; Korea’s delegate wanted to discuss the link between climate change and trade matters. I added to this debate by regretting the low saliency of trade matters in dealing with the economic slowdown (and hence youth unemployment and the impact on job growth in general) especially amongst our fellow politicians. All the MPs gathered round the table were, of course, drawn from the convinced camp. But too many of our colleagues, including in Westminster, appear deaf to the economy-priming capacity of sensible and active trade liberalisation.

Over the course of the 2 days, I felt we made progress on the parliamentary front for this, one of the most elusive of subjects. But progress on the wide scope of trade issues clearly matters, and as parliamentarians we must do all we can to make our deliberations on these important issues as relevant as possible by drawing stronger linkages to the broader economic prosperity debate in each of our countries. 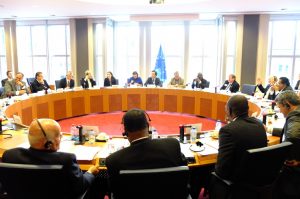 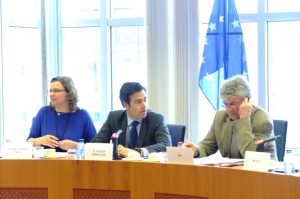 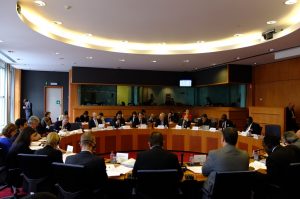