Well-being of people and planet a priority for young MPs 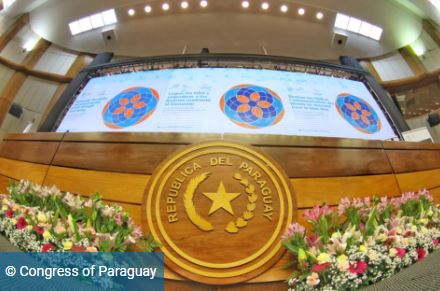 Young parliamentarians meeting in Asunción, Paraguay, have called for the pursuit of happiness and well-being to be explicitly integrated into public policy. In the outcome statement, the young MPs asserted that a country’s success could not be gauged merely by measuring its economic growth. Factors such as equality, education levels and emotional fulfilment were just as important.

Over 100 young parliamentarians from 41 countries attended the sixth annual IPU Global Conference of Young Parliamentarians under the umbrella theme Achieving the Sustainable Development Goals and empowering youth through well-being, organized in partnership with the Congress of Paraguay. The average age of the Members of Parliament was 38 years and 40 per cent were women, one of the highest percentages ever achieved at an IPU conference. In keeping with their holistic approach to securing well-being and sustainability, they were joined by representatives from international organizations, youth organizations, academia and the private sector.

Topics discussed included how to look at well-being through a parliamentary lens, by, for example, building well-being checks into the budget process, establishing parliamentary committees on happiness, or improving oversight of government performance in delivering well-being for all, particularly younger generations. Including considerations of well-being in public policy will also help identify demographic or geographic inequalities – a vital step in setting priorities for the 11 years left to implement the 2030 Agenda for Sustainable Development.

The UK Parliament was represented at the meeting by Gavin Shuker MP and BGIPU staff member, Fiona Burnet. 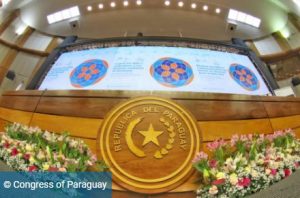