Ahead of EU accession BGIPU Delegation meets with counterparts in Zagreb 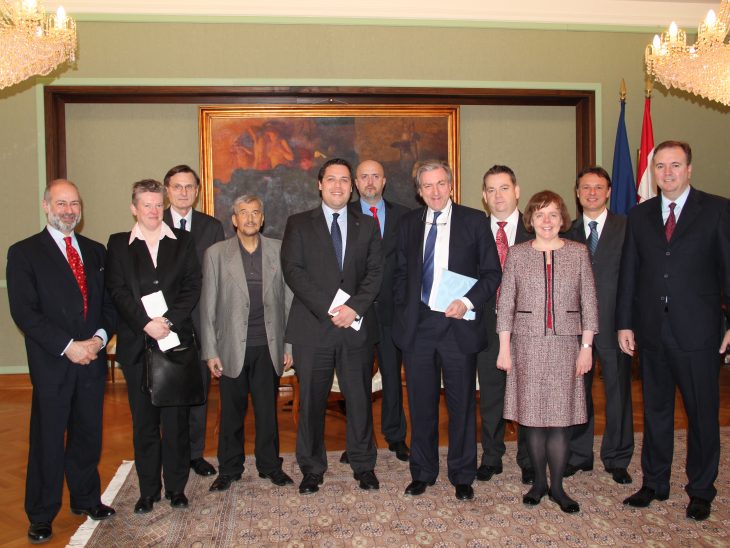 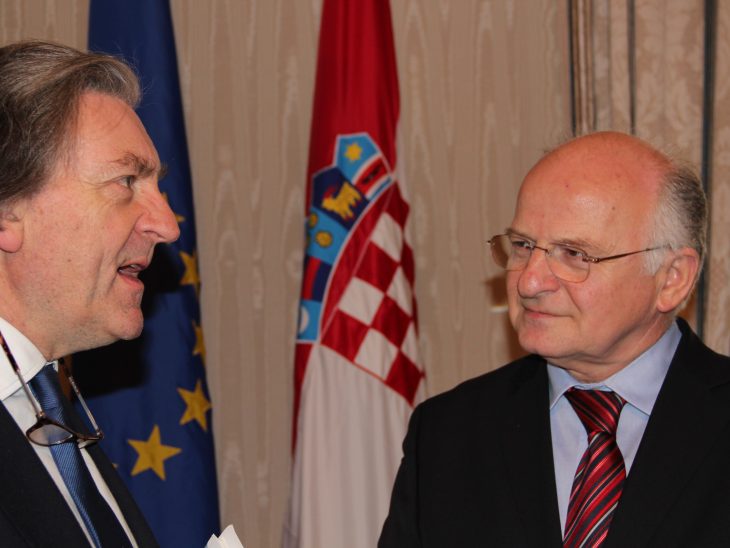 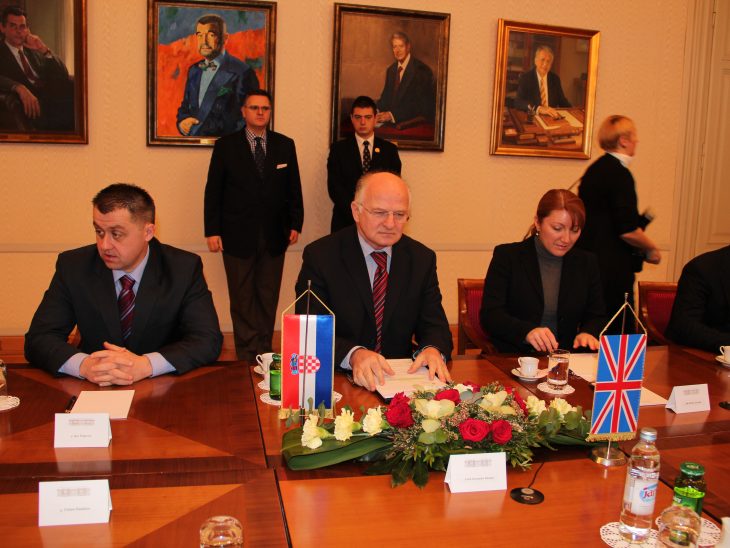 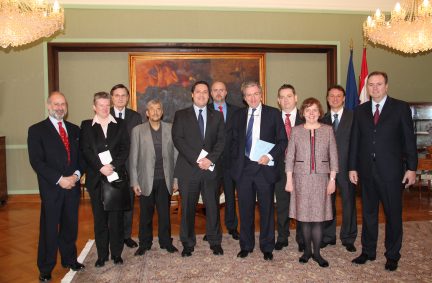 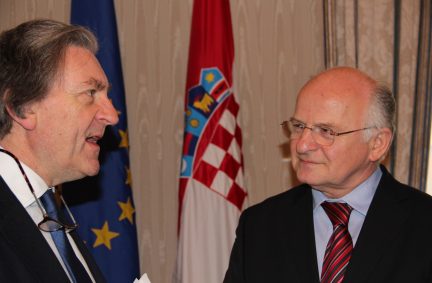 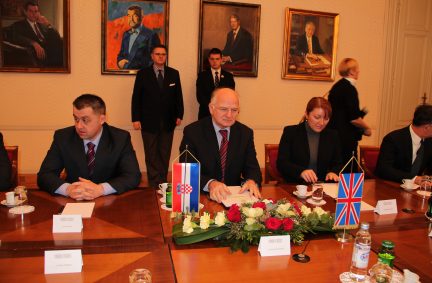 The BGIPU Delegation to Zagreb took place 4 – 8 March 2013, led by Lord Dundee, Chair of the All Party Parliamentary Group on Croatia. He was accompanied by Nigel Adams MP, Ann McKechin MP, Fabian Hamilton MP and Lord Harrison. The delegation programme including ministerial meetings, discussions with Parliamentarians and provided an opportunity to discuss the impending accession of Croatia to the European Union in July 2013.

The work of the delegation reflected three connected themes. Firstly, our message of how the European Union stands to benefit from Croatia’s forthcoming membership. Secondly, how Croatia’s economy can now be improved through its 2013 European Union membership as well as through its existing Council of Europe membership. Thirdly, how in 2013 the UK can continue to help Croatia in general, and in particular advise on evolving sound working practices between its government and parliament and Brussels.

It is sometimes assumed that EU membership for a country like Croatia is all take and no give; i.e. EU advantages coming to the new country without the EU and its membership receiving anything in return. However, that view is very far from the truth. Not least since clearly Croatia’s EU membership will strengthen the prospect of stability in south east Europe; this point was fully endorsed, by the Croatian Foreign Minister, Vesna Pusic and by her assistant Minister of Foreign Affairs, Hrvoje Marusic. There are also other aspects of civic and community management where Croatia is already doing better than the European Union average; thus in regard to which other EU countries would do well to learn and follow suit. Two such are detention and recidivism. Per head of their population Croatia locks up many less than the EU average; and of that number fewer than the EU average return to crime. When we met with the Croatian Minister of Justice, Orsat Miljenic, he commented that these Croatian statistics should soon improve even further. This would follow a forthcoming ruling to commute to community service all existing one year sentences for first offenders. Another example of give rather than take comes from a Council of Europe scheme about to be started in view of Croatia’s EU membership in July 2013. It will be the first of its kind. To engender mutual trade, education, cultural exchange and better social policies locally it will put in place working synergies between parts of Croatia ( Zadar and Sibenik on the Adriatic coast ) and parts of the UK ( Tayside, Inverness, Edinburgh ). Thereafter, and to enhance the quality of local democracy, this procedure and model can be deployed elsewhere within and between the regions and localities of the Council of Europe’s affiliation of 47 states. The BGIPU chaired a meeting to achieve the coordination and launch of this purpose. As a result, the manager of the Council of Europe’s centre for expertise, Alina Taterenko, in beginning actions next month, is now able to be directly in touch with relevant parties in Croatia.

And of course if the latter endeavour reveals how this year Croatia already contributes towards better local democracy in Europe, conversely it also demonstrates how funds acquired through the Council of Europe can stimulate Croatia’s regional economies. The sources of Council of Europe funding are mainly different to those of the European Union (although there is some common ground). Also different are how the funds are distributed. In this case to the partners at either end. That is so since the scheme is perceived as a single programme to assist local democracy in Europe. However, in 2014 following EU membership in 2013 the lion’s share of new institutional funding will come from Brussels and from the EU. For many months our Ambassador in Croatia, David Slinn and the British Embassy there have been anxious that both at national and regional levels Croatian projects for potential Brussels funding should be identified and submitted in a balanced and timely way. In a balanced way, since their submissions should focus upon the funding needs of both the social as well as the physical infrastructure. In a timely manner, since unless presented to Brussels in the next month or so this year, either a shortfall in funding or even no funding at all will come next year. We reiterated this message to those whom we met.

Then, following the UK’s constructive role in Croatia in recent years, there are the ways in which it can continue to help over the years ahead. On our guidance to Croatia on how within parliament and government (in the new context of Croatia’s EU membership) to build up good working practices we highlighted three aspects. Croatia’s EU parliamentary scrutiny committees will begin this autumn. Their parliamentary clerks were briefed last year in the House of Lords on how best to run such committees. After its discussions with the Sabor speaker in Zagreb last year this was fixed through the UK parliamentary group for Croatia. The Speaker of the Sabor affirmed that he would like to send another group to our Westminster parliament this autumn. This time his group would include some Croatian members of parliament. Secondly we mentioned dealings with Brussels. The Sabor speaker and some of his parliamentary or government colleagues also expressed an interest in learning how our Westminster government and parliament proceed with Brussels in other necessary respects. We said that we would be delighted to pass on those requests to our embassy and relevant Westminster channels. Central to healthy and protective democracies, there is as well the vital need for a continuous balance between parliament and the executive. Our interlocutors, when we referred to that aspect, were also keen to learn from us at Westminster about any structures of methods and procedures which had proved to be effective in maintaining such a balance in the interest of good democracy. 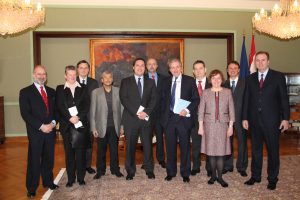 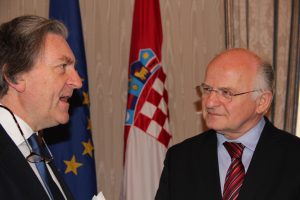 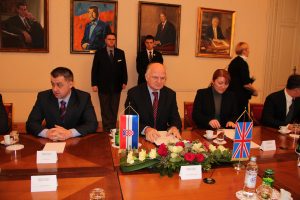