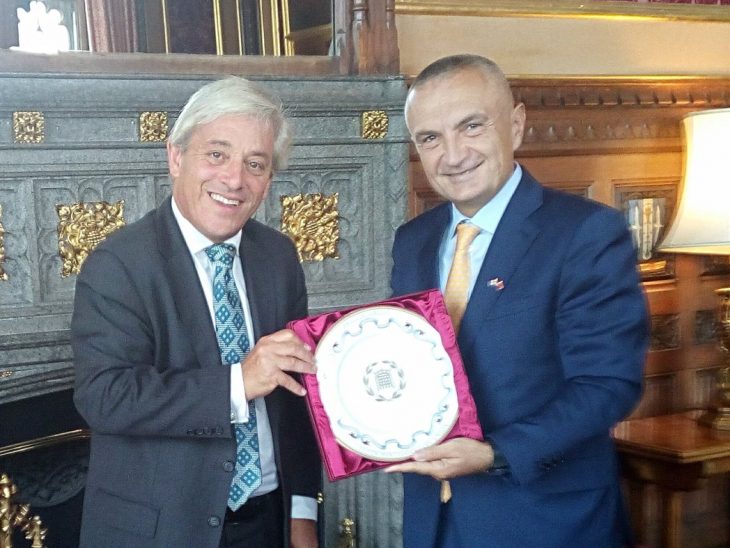 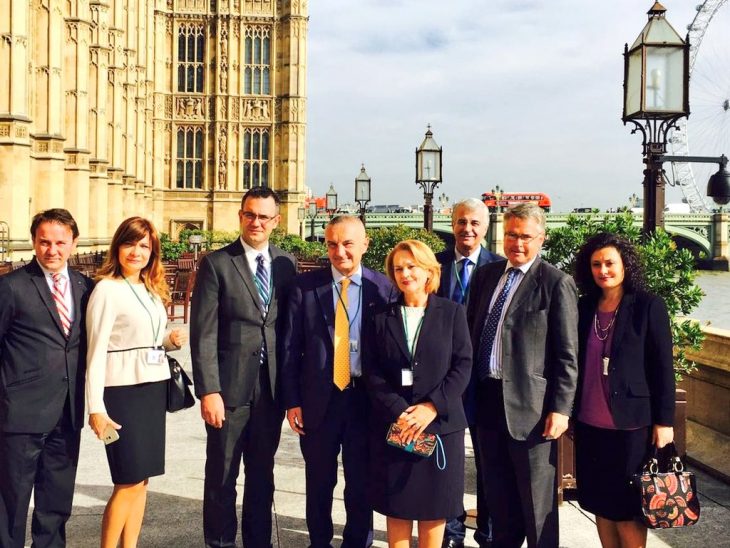 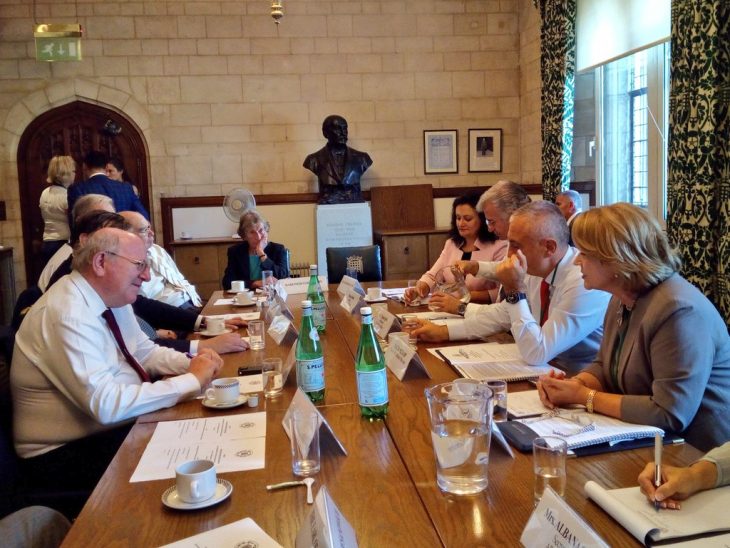 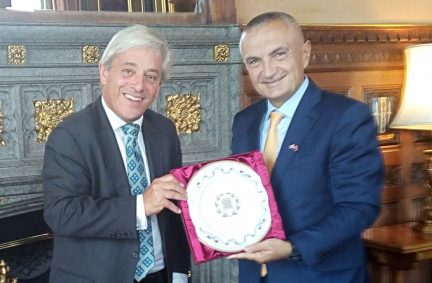 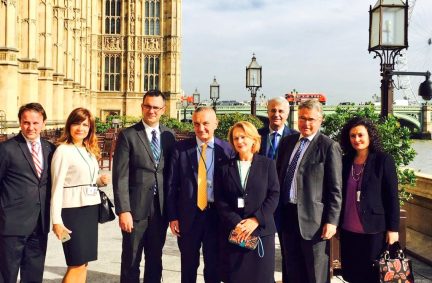 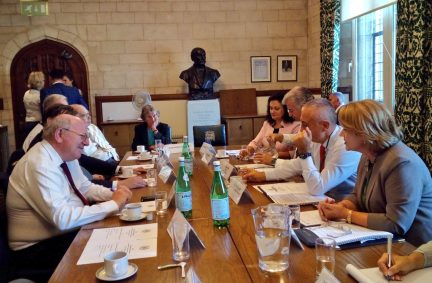 During the week of 12th September 2016, the Albanian Speaker and former Prime Minister Mr Ilir Meta MP visited Westminster, together with the Chair of the Albanian Foreign Policy Committee Mrs Arta Dade MP, Mr Gerti Bogdani MP, the Secretary General of the Albanian Parliament Mrs Albana Shtylla, and the Speaker’s Foreign Policy Adviser Mr Ralf Gjoni. Throughout the visit the delegation was accompanied by the new Albanian Ambassador in London HE Mr Qirjako Qirko and First Secretary Mrs Migena Baholli. The visit was particularly timely as the new All-Parliamentary Group on Albania, chaired by Madeleine Moon MP, had been formed the week before which was greatly welcomed by the Speaker and his party.

The busy three-day programme against the backdrop of an unusual and late heat wave in London started on Monday, 12th September, with the traditional welcome by the Chair of Ways and Means, Deputy Speaker Lindsay Hoyle MP, followed by an introduction to the formal structure and political dynamics of the parliamentary system in Westminster by the Clerk of the Overseas Office, Crispin Poyser.

The delegation also heard from Kathryn Hudson, HoC Commissioner for Parliamentary Standards, about the more specific aspects of being an MP in Westminster, including with regard to the MPs Code of Conduct, the registering of Members’ interests and the role of the commissioner herself. After a working lunch discussing the relationship of the UK, Albania and the European Union, the delegation met with the Leader of the House of Commons, the Rt Hon. Mr David Lidington MP, who in his previous role as Minister for Europe at the Foreign and Commonwealth Office (FCO) had met with Mr Meta and some Members of the delegation on previous occasions. The day finished with a Welcome Reception hosted by BGIPU Chair Nigel Evans MP, which was well attended by Members from both Houses, but also distinguished professionals from the Albanian diaspora in London.

On Tuesday morning the delegation was given a tour of both Houses by the knowledgeable Tim Loughton MP, who delighted the participants by not only showing and explaining to them the main parts of the Palace, but also taking them to more hidden gems such as the Crypt, and providing quirky facts and interesting anecdotes along the way. The next meeting with Bob Neill MP, Chair of the Select Committee on Justice focused on judiciary reform noting the Albanian Parliament had recently unanimously passed landmark reform of the judiciary to strengthen judicial independence and curb political influence, which includes the amendment of 58 articles of the constitution and passing several laws creating new justice institutions.

Wednesday morning commenced with the traditional roundtable discussions attended by Members from both Houses, and the debate included a wide range of issues such as the bilateral relationship (particularly in the context of the impacts of the UK leaving the EU), Albania’s regional relations, and the fight against serious organised crime and corruption. The latter topic was also picked up in a one-on-one high level meeting between the Albanian Speaker and Home Office Minister for Security Mr Ben Wallace MP where the mutual benefits of close cooperation on security and legal enforcement issues was acknowledged and welcomed on both sides.

Mr Meta then re-joined the delegation to observe Prime Ministers Questions, which is certainly a must-see for every visiting delegation wanting to better understand the state of politics in the UK. During the afternoon the delegation met with Lord Boswell, Chair of the EU Committee, and the discussion once again focused on the implications of the referendum result and the future of the EU with strong undertaking that the UK’s withdrawal from the EU did not mean its withdrawal from Europe or any lessening of commitment to the peace and security of the Balkans region. The last meeting on the agenda was with Rt Hon Dr Julian Lewis MP, Chair of the Defence Committee, who also explained some of the reasoning behind the UK’s vote to leave the EU, with a particular focus on defence issues in which he also highlighted the importance of UK-Albania cooperation within NATO.

This timely and valuable visit concluded by giving the Albanian delegation a better understanding of the debate around the UK’s vote to leave the EU and an insight into current UK’s political dynamics. There were strong assurances that Albania remains an important partner for the UK noting commitments to strengthen bilateral relations, including mutual interests in the future security of Europe and the fight against serious organised crime, in addition to expanding trade and economic links. UK Members noted how impressed they had been to hear about Albania often punching above its weight in its own region and praised the passage of far-reaching judicial reforms. Interest on both sides to enhance political exchanges between the two countries was recognised and BGIPU looks forward to sending a delegation to Tirana in the near future. 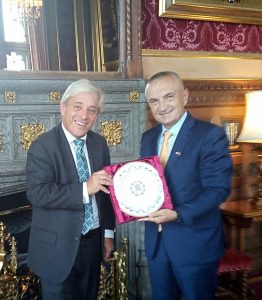 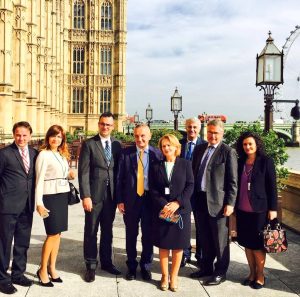 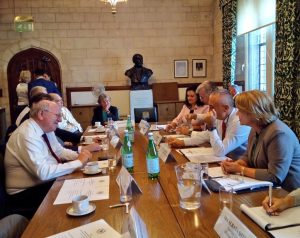