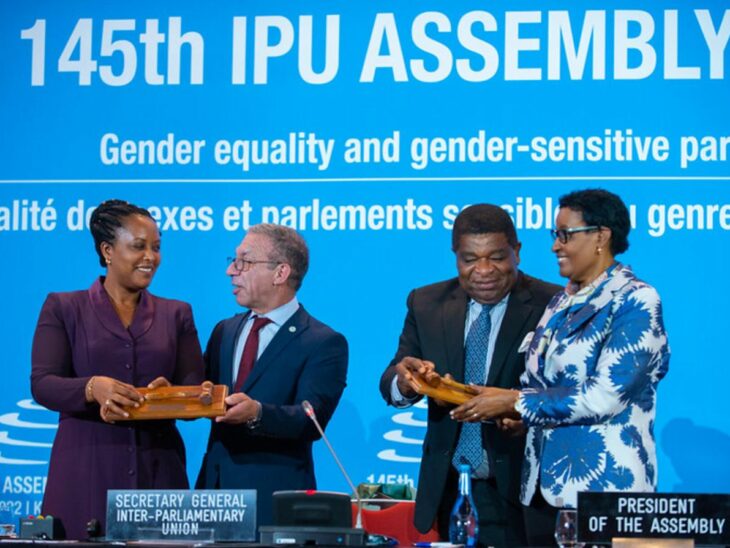 Closing of the 145th IPU Assembly in Rwanda, October 2022

2022 saw the first year of the implementation of our new 5-year strategy. The Strategy gives us a renewed mandate to continue strengthening and connecting parliaments for peace, democracy and sustainable development.

It opens up new avenues for the IPU to support parliaments in other strategic areas, especially climate change, identified by IPU Member Parliaments as the top priority where the IPU should concentrate its immediate efforts, across all areas of work.

In March, the IPU convened hundreds of parliamentarians for its 144th Assembly hosted by the Indonesian Parliament, on the theme Getting to zero: Mobilizing parliaments to act on climate change.

The Assembly concluded with the adoption of the Nusa Dua Declaration. The declaration outlines the national action parliaments need to take to implement the Paris Agreement, including accelerating the transition to clean energy, ensuring the inclusion of marginalized members of society and enhancing global cooperation for joint climate solutions.

In June, the IPU held its Eighth Global Conference of Young Parliamentarians in Sharm-El-Sheikh in partnership with the Egyptian Parliament. The theme of Young MPs for climate action was designed to harness the potential of young MPs to feed into the COP27 climate conference in November.

At the IPU meeting at COP27, some 200 MPs heard from their peers on the frontlines of climate change – those suffering from the deadly floods in Pakistan or the severe droughts in the horn of Africa, and those, for example in the Pacific, for whom a rising sea level poses an existential threat.

The outcome of all the climate change meetings that took place in 2022 was clear. Parliaments must be at the forefront of global efforts to implement the Paris Agreement in terms of policy-making, legislation, budgeting and especially scrutiny of government implementation.

The Russian invasion of Ukraine sent ripple effects across the world. The IPU was prompt to condemn this flagrant violation of the principles of sovereignty and territorial integrity.

But the IPU kept the door open for diplomacy by setting up a Task Force composed of eight prominent parliamentarians representing the global parliamentary community, with a view to contributing to a peaceful resolution of the war in Ukraine.

The Task Force was able to visit both Kyiv and Moscow in July. In both capitals, the Task Force underscored the need for prompt de-escalation and the return to dialogue for the peaceful resolution of the war, in strict observance of international law.

At the 145th Assembly in November, the IPU Task Force was also able to meet high-level parliamentary delegations from both the Russian Federation and Ukraine separately. The Task Force expressed the hope to bring them together around the same table in 2023.

A step closer to gender parity

By the end of the year, the IPU reported that 26.4% of parliamentarians in the world are women, an all-time high. But there is still a long way to go to reach gender parity.

Rwanda continues to top the IPU monthly ranking of women in parliament, the authority for influential media and academia when it comes to measuring the progress of women in parliament. As a result, it made sense for the second IPU Assembly of the year in Rwanda to focus on gender equality.

It encourages IPU Members to step up their efforts to promote gender equality in institutions and society by, for example, implementing electoral gender quotas, ensuring law-making and budgeting is gender responsive and ending gender-based discrimination and violence.

Being an MP continues to be a risky endeavour

On Human Rights Day, the IPU released its annual global snapshot of the situation of threatened parliamentarians. A record number of 739 parliamentarians from 44 countries all over the world suffered violations of their fundamental rights this year.

The 2022 figures represent an increase of nearly 10% compared to 2021 (673 MPs in 44 countries). They confirm a continuous upward trend since 2014 in the number of cases examined by the IPU Committee on the Human Rights of Parliamentarians.

However, the IPU Committee was also able to close the year with some notable success stories and satisfactory resolutions to some of its cases.

For example, in a good example of parliamentary solidarity, the Argentinian Parliament led efforts to facilitate the relocation of Afghans in danger, including women parliamentarians and parliamentary staff, following the Taliban take-over in 2021.

The first refugees arrived in Argentina in October 2022. The actions followed an IPU statement expressing concern over the humanitarian situation in the country and calling on MPs around the world to support their colleagues in Afghanistan.

Lastly, the IPU continued to produce some great tools for parliamentarians and policy-makers based on its research and programmatic work, including the 2022 edition of our flagship Global Parliamentary Report 2022 on public engagement as well as a new handbook on Universal Health Coverage.

As we enter 2023, with a world at war and suffering from multiple crises, we firmly believe that parliaments can be and must be part of the solution to many of our global challenges.

As President and Secretary General of the global organisation of parliaments, we reiterate the commitment made in our new Strategy to build stronger and more resilient parliamentary ecosystems, with parliaments at the core, for the benefit of all. We are counting on the robust support of all our Members and partners.

Season’s greetings to our Members, our friends and the wider parliamentary family around the world. 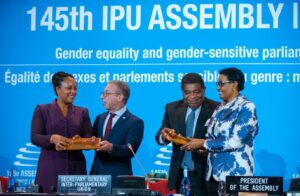 Closing of the 145th IPU Assembly in Rwanda, October 2022