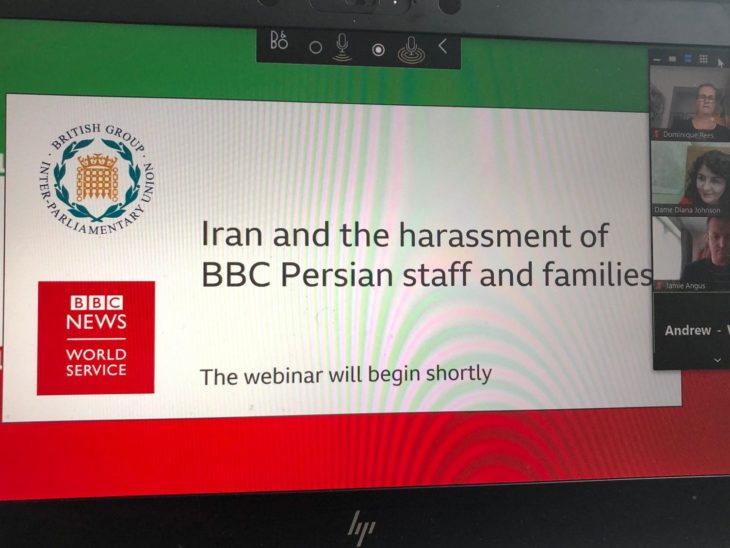 BGIPU co-hosted with the BBC World Service a virtual discussion on the continuing harassment of BBC Persian staff and families by Iran. The event on 5 October 2020 and was chaired by BGIPU Vice-Chair and Chair of the Parliamentary Human Rights Group, Dame Diana Johnson MP.

The discussion followed up earlier BGIPU events and served to highlight the importance of media freedom and protection of journalists to enable them to report unimpeded in their essential role all over the world to report developments in an impartial, fair and accurate manner; the very hallmark for which the BBC is highly regarded and recognised worldwide.

The Zoom event was very well-attended and included briefings from the Director of BBC World Service, Jamie Angus, BBC World Affairs Editor, John Simpson, former BBC Chairman, Lord Grade, and BBC Persian TV presenter, Rana Rahimpour. The speakers gave updates on the latest developments concerning the harassment of BBC Persian Service journalists and their families by Iran and how UK and international engagement and dialogue with Iran, including clear messages of the unacceptability of such harassment, might work to address the issue.

This was a very timely briefing continuing BGIPU’s support for the UK Government’s campaign (with Canada) to defend media freedom globally and make the world safer for journalists simply carrying out their vital work.  Participants were particularly upset by the harrowing testimony provided by BBC Persia Service journalists of the threats and harassment they and their families suffer on a daily basis for simply shining a truthful light on such a vitally important country for both the UK and all its neighbours in the Middle East region. 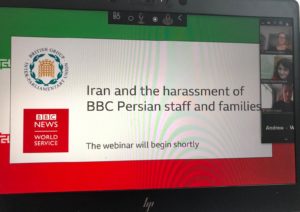