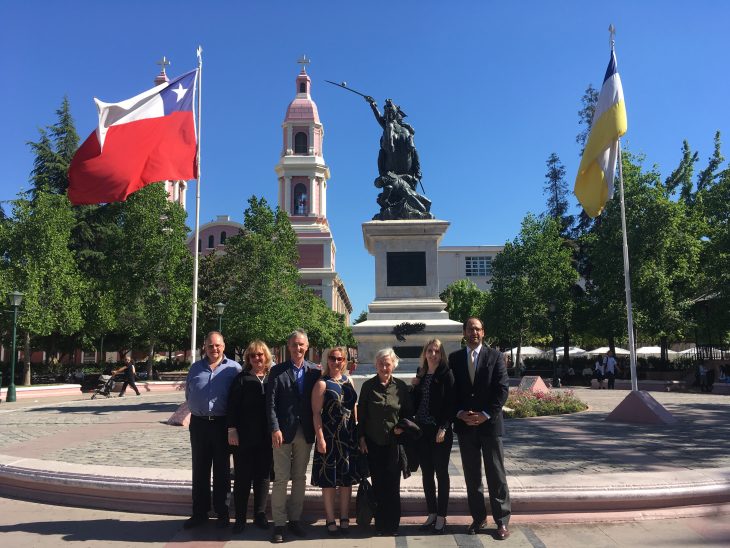 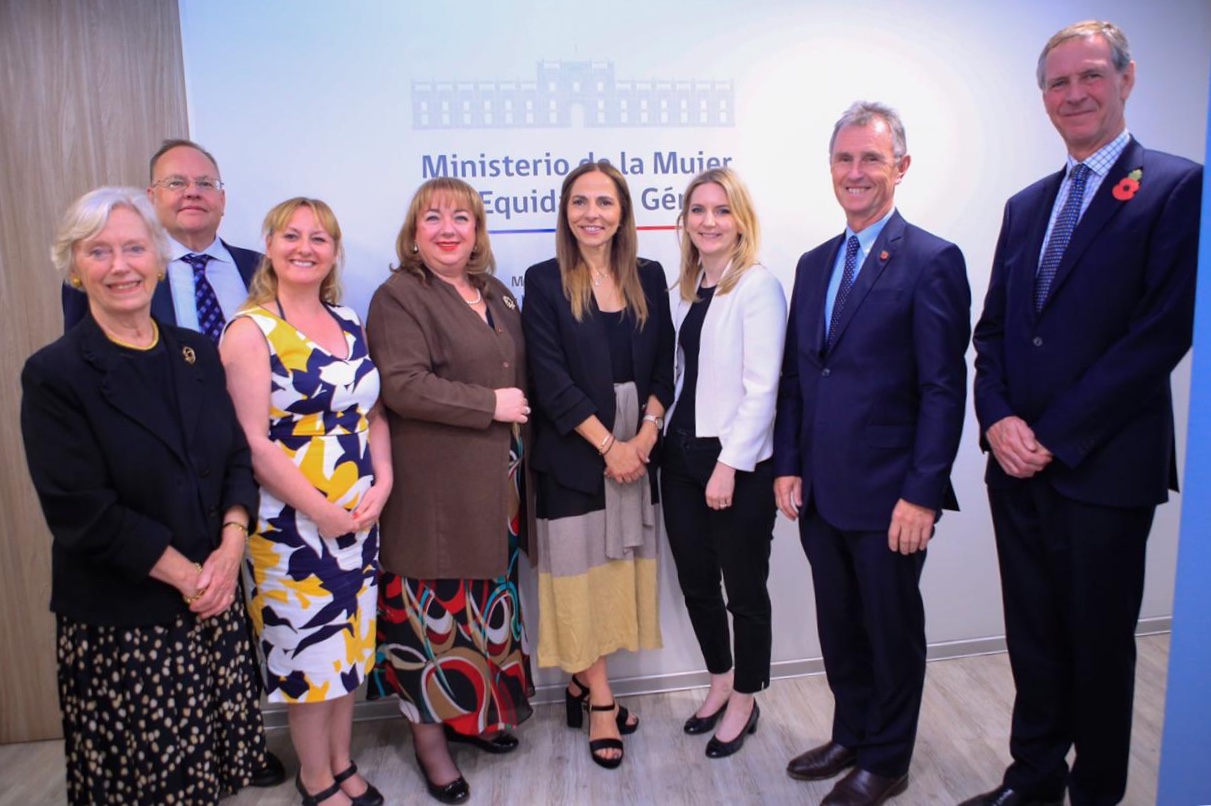 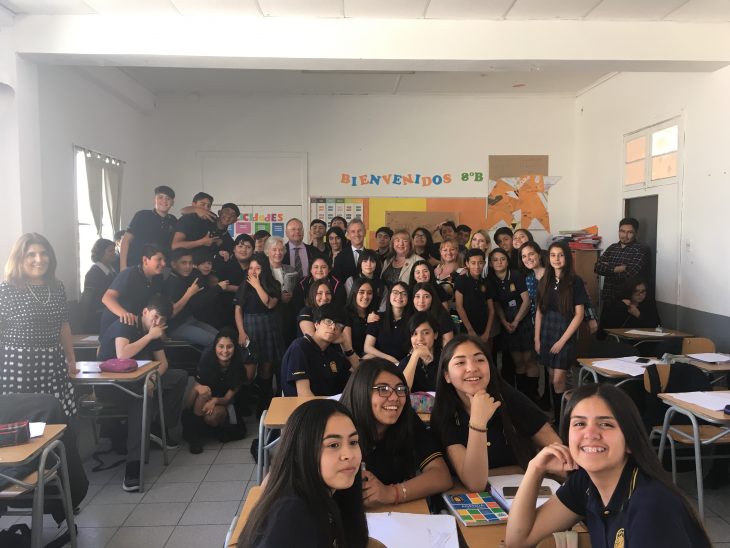 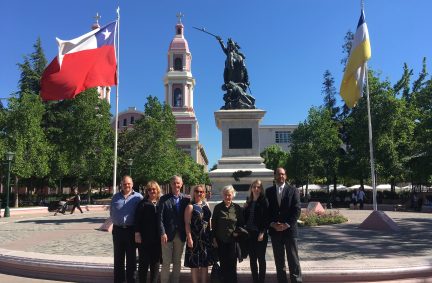 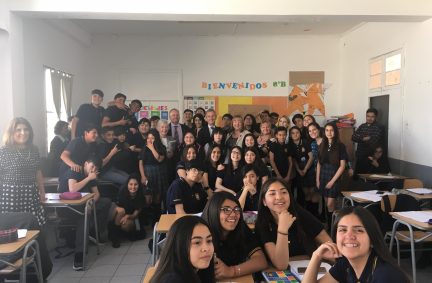 From 4th to 9th November 2018 I had the privilege to lead a cross-party delegation to Chile, comprised of Julia Lopez MP (Conservative), Dr. Lisa Cameron MP (SNP, Chile APPG Chair) and Sharon Hodgson MP (Labour, Shadow Public Health Minister) from the House of Commons, and Baroness Hooper CMG (Conservative) and Lord Rennard MBE (Lib Dem) from the House of Lords. We were accompanied by BGIPU staff member Anja Richter and ably assisted by Ambassador Jamie Bowden and Political Officer Pablo Tapia from the Embassy in Santiago.

Dr Lisa Cameron, Baroness Hooper and I arrived a day earlier from Buenos Aires, where we had spent the previous week for the IPU “P20” Parliamentary Speakers conference, which Argentina hosted in the lead-up to the G20 Leader’s Summit at the end of that month. Our early arrival meant that we were able to participate in a dinner at the beautiful British Residence hosted in the honour of the Archbishop of Canterbury who was visiting Chile that weekend and attended by several other Bishops from around the world.

The other three members of the delegation arrived on Sunday 4th November, unfortunately two of them without suitcases. A welcome distraction was a brief tour of Santiago, which not only gave us a chance to get a glimpse of the city, but short visits to the Pre-Columbian Museum, the Pueblito de los Dominicos Market, the Cathedral, the main Plaza de Armas Square, and the Presidential Palace La Moneda amongst other highlights provided us with an introduction to Chilean history and culture. In the evening Ambassador Bowden and his team offered a briefing on the bilateral relationship and a flavour of Chilean politics.

The official programme started early on Monday, and fortunately everyone had their suitcases by then, so the delegation was ready for a packed day with back to back ministerial meetings and a working lunch. The first meeting was with the Minister for National Assets, who transmitted the request for the return of a historic monolithic human figure, the famous Moai, which had been transported from the Easter Islands (Rapa Nui) 150 years ago and is kept by the British Museum. A very moving and powerful case was made by three Rapa Nui representatives and the Minister informed us that he was coming to London for further discussions with the British Museum.

We then met with the Vice-Minister for Foreign Affairs, who was interested to get an update on Brexit negotiations. As we would discover, Brexit featured several times during our meetings, often brought up by the Ministers themselves, as the Chileans are watching developments closely. During meetings with the Minister for Mining and the Minister for Energy we discussed mineral extraction – copper and lithium being the most important exports for Chile – and clean energy production. The lithium find is vitally important for battery production and the Minister was keen to look for partners to help develop the battery technology in Chile. This is seen as important for both mobile phones, but also electric vehicles and airplanes.

A working lunch hosted by Issa Kort, Chair of the UK-Chile friendship group, in the historic Club La Union in the city centre was followed by a brief visit to La Moneda, the seat of the President (but not his residence) housing the offices of three cabinet ministers and some representative rooms. The afternoon was spent meeting with the Minister for Women and Equalities, and the Minister for Social Development, where we exchanged some issues of mutual concern including pensions and the welfare state in general.

The next day the delegation set off to Valparaiso, the old port town just over an hour to the North West of Santiago, where the Parliament is located. We were welcomed by the Vice-President of the Chamber of Deputies, Mario Venegas Cardenas. Incidentally, we had met the absent Speaker, Ms Maya Fernandez Allende, in Buenos Aires already. The large number of meetings we had that day, including with the Ethics and Transparency Committee, the Scrutiny Committee, the Education Committee, the External Relations Committee, the Agriculture Committee, and the Health Committee did test our levels of energy, but gave us the chance to discuss a wide range of issues with counterparts and learn a lot about Chile’s challenges and policy priorities. While observing the session in the Camara de los Diputados we were also formally introduced to the Chamber.

During a working lunch kindly hosted by Issa Kort again, we also had the chance to engage with other members of the UK-Chile friendship group on bilateral issues and met Mariano Fontecilla de Santiago Concha, a career diplomat still going strong at the age of 93, who was sharing anecdotes about the Queen’s visit to Chile exactly 50 years ago, which he oversaw. As the name gave away, he is also a direct descendant of the first Marqués de Casa Concha and great grandson of the company’s founder, Don Melchor Concha y Toro, the world-famous vineyard we were going to visit later that week. The day finished with a short tour of Valparaiso, where we were impressed by the high-quality of the ubiquitous graffiti the city is known for, and payed our respects at the Monument to the Heroes of Iquique (naval battle in the War of the Pacific) and the memorial to Thomas Cochrane, the British naval flag officer and former MP who helped found the Chilean Navy exactly 200 years ago. We were told the Princess Royal would be coming out to Chile for the commemoration later that month.

Wednesday the 7th November saw the delegation visiting the old mining town of Sewell near the site of the world’s largest underground copper mine El Teniente. Up on 2,200m the City of Stairs was founded in 1906 by the Braden Copper Company to extract copper from the mine. At its peak in 1960, it housed more than 16,000 people, but after the Chilean government nationalised the mine in 1971 and started moving people away it declined and most of its buildings were demolished. The Chilean Government declared Sewell a National Monument in 1998 and it has been a UNESCO World Heritage Site since 2006. It was quite an unusual visit with an excellent museum detailing the history of the mine, the town and the special culture (a combination of Chilean and American customs) and contained many artefacts of the era including old typewriters, ledgers, and items made from copper. We also visited a disused bowling alley which was the first in Chile and was in perfect condition so that some of us had a cheeky go.

Back on lower levels the delegation was received by the Mayor of nearby Rancagua, the regional capital, and local MP Issa Kort. We discussed the impact of the mine on the regional economy as well as other local government topics, discovering that bin collection is on every municipality’s mind. We also visited the newly established local university, Universidad O’Higgins, which is so new it has yet to award degrees, but is working closely with partner universities around the world including the UK.

On Thursday the delegation visited a school on the outskirts of Santiago and spoke with many children and teachers, testing their English and engaging in discussions on British pop culture and football. The school is part of a network supported by the British Council, providing training on inclusive teaching and equal access to education. After this we headed back to our base in Las Condes, where had a chance to discuss in more depth with the Embassy team the prospects of a Free Trade Agreement with Chile following Brexit. Continuing the theme we then met with a range of business representatives for a working lunch, who told us about the difficulties of attracting British business investment in Chile. Brexit featured widely, and the delegation spoke of opportunities for trade between the two countries when independent trade deals can be fully entered.

In the afternoon we visited the Universidad Diego Portales to discuss human rights in Chile, particularly women’s rights and LGBT issues, with local students and activists. Later that evening the delegation attended a Royal British Legion garden party at the British Residence which was attended by over 300 people from the Anglo-Chilean community and raised large sums for the Legion.

On the last day we went to the Pontificia Universidad Católica de Chile to discuss Brexit, bilateral as well as regional relations, and other global issues of mutual concern – US-China tensions, the Road and Belt Initiative, Antarctica, among others – with students, academics and former Ambassadors to the UK. This was followed by a visit to an eye clinic which featured a video link with Moorfields Eye Hospital back home as they had signed a major cooperation agreement recently, and hearing more about the Public Health system in Chile.

Our last engagement was a visit to the world-famous winery Viña Concha Y Toro, maker of the Casillero del Diablo brand for whom the UK is one of the key export markets, where we heard from the Executive responsible for the UK market about concerns in the context of Brexit, and prospects of increased trade. We then started the long journey back to the UK, with a lot of food for thought and homework to do… 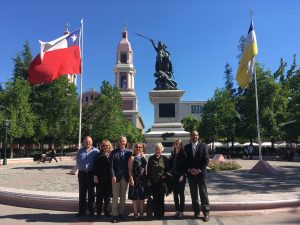 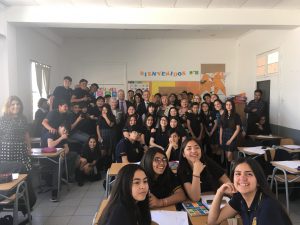