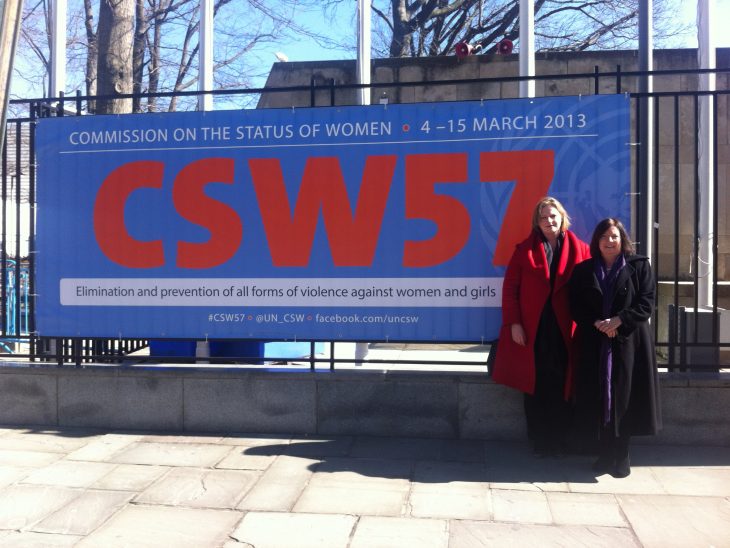 This was an excellent visit that really benefitted from the preparatory work undertaken before the visit. The briefing meetings with the Gender and Equalities Office and the meeting with representatives from NGOs attending the conference were particularly beneficial. Both meetings helped us to focus on key issues that would be discussed at the conference and either gave us or directed us to reading material that proved very helpful indeed. This background material was essential in gaining an understanding of matters that would arise later with the formulation of the conference communiqué.

The longer length of stay compared to previous years meant that we were able to attend a range of meetings with the DfID Minister and attend side events, communiqué writing sessions as well as fully participate in the IPU session itself. We would thoroughly recommend that future visits should run from Sunday – Wed/Thursday to make the most of the visit.

The conference theme was ‘Ending Violence against Women”. All countries had valuable experiences to contribute to this debate and this was reflected for the most part in excellent and often moving discussions in the various sessions. In general the sessions were more deliberative and interactive than last year.

Over the four days we attended a large number of sessions and events and the report below merely tries to capture something of the range of activities undertaken.

The opening session was followed by a lunch hosted by Parliamentarians for Global Action.  The meeting was led by Ms Shazia Rafi the Secretary General of PGA, Ambassador Herman Schaper the Netherlands Permanent Representative to the UN and Deputy Mirabal from the Dominican Republic and was attended by MPs from Finland, Austria, Denmark, UK and Pakistan alongside UN Women staff members. The discussion focused on promoting gender equality, reproductive rights and support for an international Arms Trade Treaty.Delays with the pass office meant that we were only able to witness a little of the opening event but as the picture shows this was an impressive meeting held in the UN General assembly with opening speeches from Senior Government Ministers.

This was followed by a fascinating workshop on gender based violence against women in gender equal societies addressed by Minister Lynne Featherstone and representatives from Demark and Canada.

It was also very useful to be able to attend a welcome reception hosted by the British Permanent Representative to the UN Ambassador Sir Mark Lyall Grant for British NGOs attending the conference.

This day was set aside for the main IPU discussion concentrating on Parliamentary strategies for tackling violence against women and girls.

After some time set aside for testimonials the discussion turned to the first theme which was what can be achieved when Parliaments commit to ending violence against women and girls.

The afternoon session focused on violence against women in the political arena and included a presentation from Roberta Blackman-Woods MP on the need to tackle harassment and violence directed at women politicians.

We also managed to fit in a lunchtime event led by The FCO, UK Aid Women’s Initiatives for Gender Justice on Sexual Violence in Conflict situations at the Ford Foundation. The event opened with powerful videos featuring survivors of sexual abuse in conflict situations and was followed by very strong presentations from Lynne Featherstone, Minister at DfID, Fatou Bensouda, Chief Prosecutor at the International Criminal Court and Zainab Bangura SRSG on Sexual Violence in Armed Conflict.

The day’s activities concluded with a meeting held at the British UN Mission HQ with Helen Reardon-Bond Head of Gender Equality at the GEO and representatives from British NGOs to discuss progress with the conference communiqué and how the UK was preparing for a major initiative at the G8 on gender based violence and female genital mutilation in particular.

We had a very early but really interesting start to the day at a breakfast organized by ActionAid and the Women in the World Foundation on ‘Securing a Future Free from Violence for the Women in Afghanistan’. Speakers included Lynne Featherstone Minister, DfID, from ActionAid, Mabel McKeown from WIWF and Ms Shinkai Karokhail representing Afghan MPs.

This Session concentrated on what had been achieved for women in Afghanistan since the fall of the Taliban and what is at risk following the withdrawal of international military personnel.

We then attended the main conference session and fitted in a UN meeting that was considering the setting up of a working group to take forward sustainable development. This event provided an amazing opportunity to observe the detailed workings of the UN and was on a topic directly relevant to the CSW concerns as women often need access to economic independence to escape violence.

At lunchtime we attended the preparatory panel for 2014 looking at the Challenges and Achievements in the Millennium Development Goals for women and girls. The panel meeting included included detailed and extremely informative presentations from Ms Naila Kabeer Professor of Development Studies, School of Oriental and African Studies, London University; Ms Carole Presern, Director, Partnership for Maternal, Newborn and Child Health Secretariat and Lyla Mehta Research Fellow, Knowledge Technology and Society Team Norwegian University of Life Sciences which concentrated on a detailed evaluations of what had worked with MDGs in terms of maternal and child health and education and what still had to be achieved on a country by country basis.  This session began with a powerful speech by Madame Michelle Bachelet, Head of UN Women on the continuing need to address MDG issues.

The afternoon was taken up with a session focused on tackling the attitudes of young people to gender based violence addressed by Lynne Featherstone from the UK, and Jet Bussemaker from The Netherlands which outlined an overview of the British media project on abusive and controlling teenage relationships and the ‘We Can’ project in the Netherlands. Their talks included a detailed look at how the media, including social media, can be used to spread messages of zero tolerance of violence to young people. Analysis of what works was provided by Carlin Firmin a researcher from the University of Bedfordshire. Gary Barker also outlined work being undertaken in the UK and US encouraging men and boys to tackle violence against women.

In the afternoon Mary Macleod also attended a World Health Organization event at German House about linkages between violence against women and health.

This was followed by an excellent IPU session giving an update on women’s representation in parliaments across the globe and what could be done to improve the number of women in parliament and in particular senior positions within it.

The day concluded with an evening meeting held at the UK UN Mission with Helen Reardon Bond and two representatives from the FCO to update NGOs on the process for taking forward MDGs following 2015. This was an extremely informative session and should probably be repeated for interested MPs in the UK.

The morning was taken up with a series of bilateral meetings with UN women and UNDP representatives to discuss how best UK Parliamentarians, the IPU and BGIPU in particular could help the UN to address issues facing parliamentarians. The meetings were very useful and will need a follow up work to be undertaken in the UK.

In the afternoon Roberta got the opportunity to observe the communiqué negotiations. Britain’s position was being represented at part of the EU block. Again watching the CSW at work in this way was fascinating and as discussions are still ongoing we hope to catch up with the finalised version of the communiqué later this week.

Amendments were considered on a line by line basis and were for the most part very consensual reflecting an need for all parliaments to tackle violence against women more effectively.

We did of course pop into a number of side events as time between the main sessions allowed. These included addressing violence in the workplace, monitoring violence against women and achieving gender justice.

Our visit this year was greatly strengthened by being able to attend more events with the British Minister representing DfID and we were joined by the Equalities Minster from Gibraltar, Samantha Sacramento. She brought an extremely interesting dimension from the Overseas Territories to our discussions.

This was an extremely worthwhile visit that added much to our understanding of the issues involved in tackling violence against women and girls on a global basis. We were also able to do much to reflect the position of the UK parliament in addressing this matter. Networking opportunities as always provided real insights into how countries have much to learn from each other in making the world a safer place for women and girls. 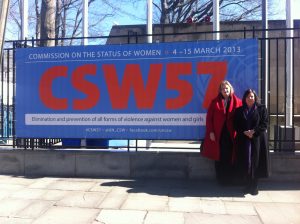