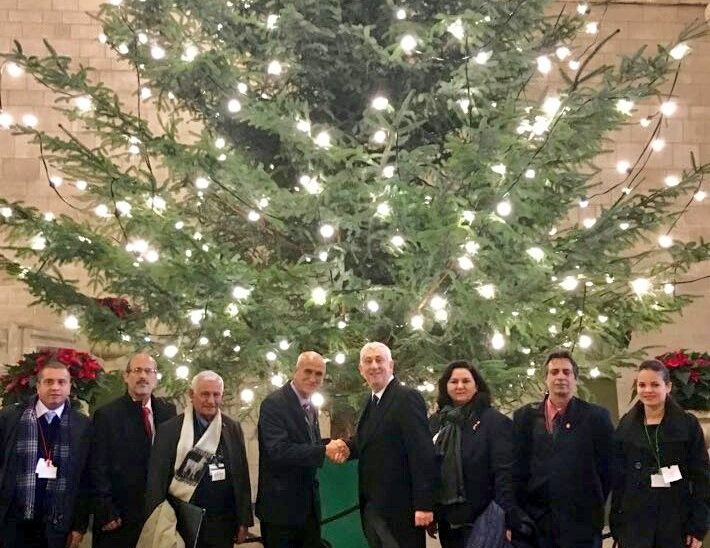 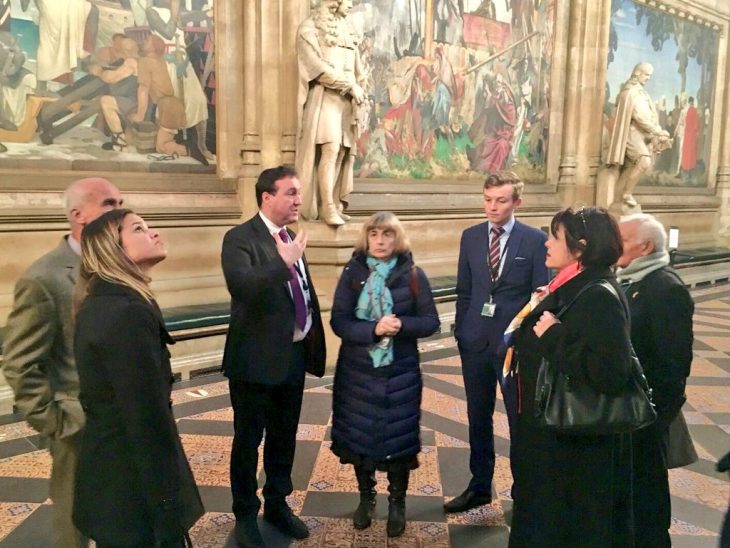 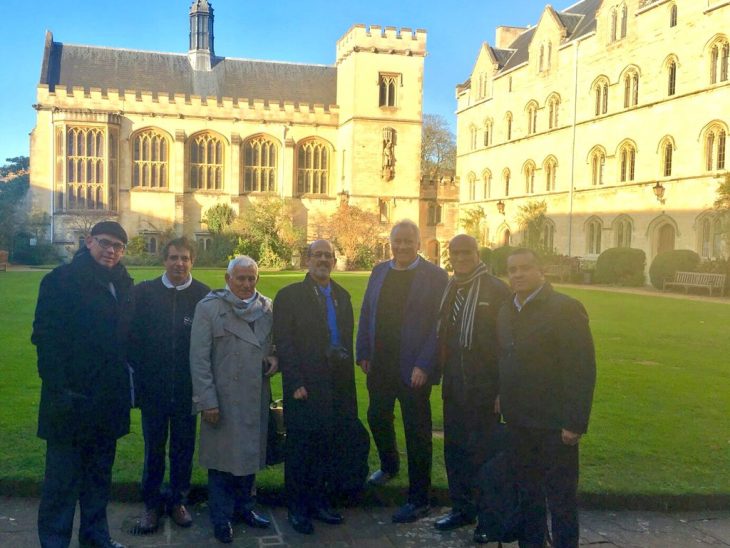 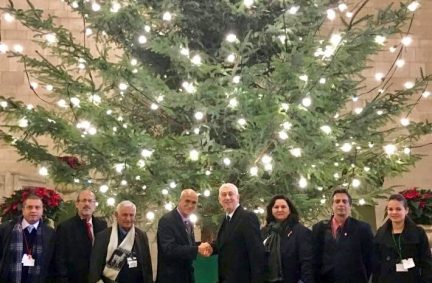 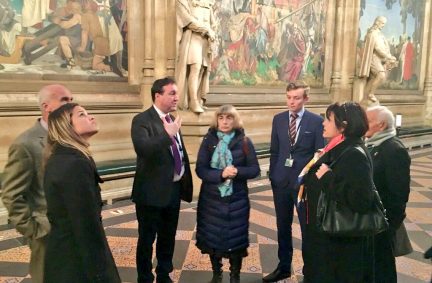 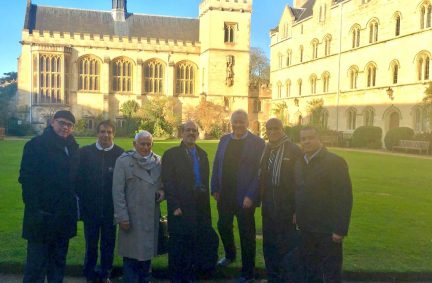 In the run-up to the much anticipated elections in Cuba in early 2018, BGIPU hosted a historic visit by a Cuban parliamentary delegation from 27th November to 1st December. Led by Mr Santiago Lajes Choy MP, Vice-Chancellor of the University of Camagüey, the delegation consisted of Mr Rolando González Patricio MP, Mrs María Rubio Hernández MP, Ms Gretchen Gómez González MP, Mr Roberto Nuñez Moreira MP, and Mr Pablo Oden Marichal Rodriguez MP, ably assisted by Mr Jesús Mora González and the Cuban Embassy team in London led by HE Ms Teresita de Jesús Vicente Sotolongo. Given many members of the delegation had academic and/or medical backgrounds, the focus of the programme that stretched over three days in Westminster and two days in Reading/Oxford was on education and health.

Having arrived on Sunday the delegation started their programme on a very rainy Monday morning with the traditional welcome by Deputy Speaker and Chairman of Ways and Means Rt Hon. Lindsay Hoyle MP, who gave them a brief introduction to the history of Westminster Hall. Following an overview of the Westminster System by the Clerk of the Overseas Office Matthew Hamlyn, the delegation was hosted by BGIPU Executive Committee member Lord Gilbert of Panteg for a Welcome Lunch. Topics discussed included the education system in Cuba with a particular focus on Universities and the internet access students have in public libraries, tourism especially in the aftermath of hurricane “Irma”, and the impact of the US embargo. In the afternoon the delegation met with Health Select Committee Chair Dr Sarah Wollaston MP and fellow committee member Dr Paul Williamson who were keen to learn more about the health system in Cuba. In return, the Cuban delegation was interested to hear about the issues being discussed in the committee, but also how Dr Wollaston splits her time between committee work and sitting in the chamber. Afterwards the delegation met with the House of Lords’ International Relations Committee, who were keen to hear the delegation’s views on the situation in Venezuela. This was followed by a meeting with the Shadow Chancellor Rt Hon John McDonnell MP, who expressed his strong support for the Cuban cause. The day finished in the IPU Room with a reception hosted by Baroness Hooper CMG and attended by a range of Members from both Houses, Cuban expats and a few Ambassadors from the region.

On Tuesday morning the delegation was treated to a tour of Parliament by Chris Matheson MP, a long-standing friend of Cuba. They then met with Ian Murray MP representing the Foreign Affairs Select Committee, who – like many Members throughout the visit – wanted to hear the delegation’s views on the United States and in particular on President Trump. During the working lunch hosted by Helen Goodman MP the delegation had a chance to engage with various Members on a wide range of issues, but also to share more about their different professional backgrounds. As one of the main themes of the visit was education and the question of how to improve links in Science and Technology, the delegation was grateful to hear from the Clerk of the Science & Technology Committee about what they do. Karen Lee MP, chair of the Cuba APPG, looked after the delegation for the rest of the day with a programme separately organised with the Embassy.

Wednesday morning continued with the Science & Technology theme, as the delegation received a briefing from the Parliamentary Office for Science & Technology (POST), exploring ways for future cooperation. This was followed by a roundtable discussion chaired by Karen Lee MP, where the discussion focussed on health and education, but also explored options for future cooperation in other areas such as renewable energies. The delegation then enjoyed what for many is one of the highlights of the week: watching Prime Minister’s Questions from the Speaker’s Gallery. Afterwards, they were hosted for lunch by the Opposition Leader in the House of Lords, Rt Hon. the Baroness Smith of Basildon, another great friend of Cuba. After lunch the delegation heard from the British Council about their work in Cuba, before they met with Rt Hon Sir Alan Duncan MP, Minister of State for Europe and the Americas at the Foreign and Commonwealth Office. Delegation leader Mr Lajes Choy thanked the Minister for his presence at the funeral of Fidel Castro a year earlier and for the support the UK has given Cuba especially in the context of the US embargo. In return, Director for the Americas Kara Owen thanked the Cubans for looking after UK tourists so well during and after hurricane Irma. In the evening Ambassador Vicente hosted a small reception for the delegation and guests.

Early on Thursday the delegation headed to Reading, where they were hosted by Dr Par Kumaraswami, Associate Professor in Latin American Cultural Studies, and a range of professors and teachers – including a Cuban colleague – at the University to discuss how the links between Reading and Cuban Universities could be improved, and were also advised on ways to obtain more scholarships for Cuban students and scholars. The delegation then braved temperatures just above zero and visited the beautiful Botanic Gardens, before driving off to Oxford, where they got a chance to walk around the city centre for a bit. In the evening they were hosted by the Lord Mayor of Oxford, Cllr Jean Fooks, with whom they not only talked about the significance of the University and research centres for the city, but also discussed challenges like social security and care.

On the last day of the programme the delegation spent a few hours at the University of Oxford, first at Pembroke College, where they got an overview of medical training at Oxford by Professor Jeremy Taylor, and then at St Antony’s College, where they were hosted by Diego Sanchez-Ancochea, Director of the Latin American Centre. They then had a chance to dive a bit more into Oxford’s history and visited the beautiful Bodleian Library. After a hearty and warming Christmas lunch, where they got to try some traditional fish&chips and experience the Christmas cracker tradition, the delegation headed back to London, from where they returned to Cuba in the early hours of Saturday morning, certainly with a number of new friends and food for thought on their return. 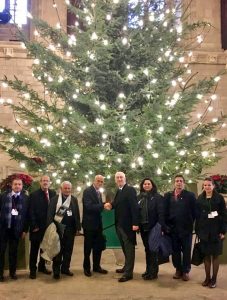 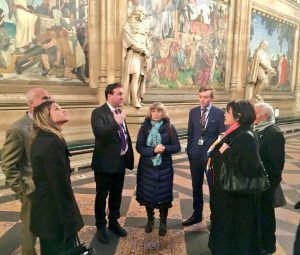 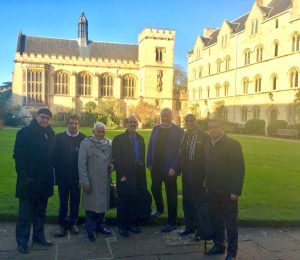