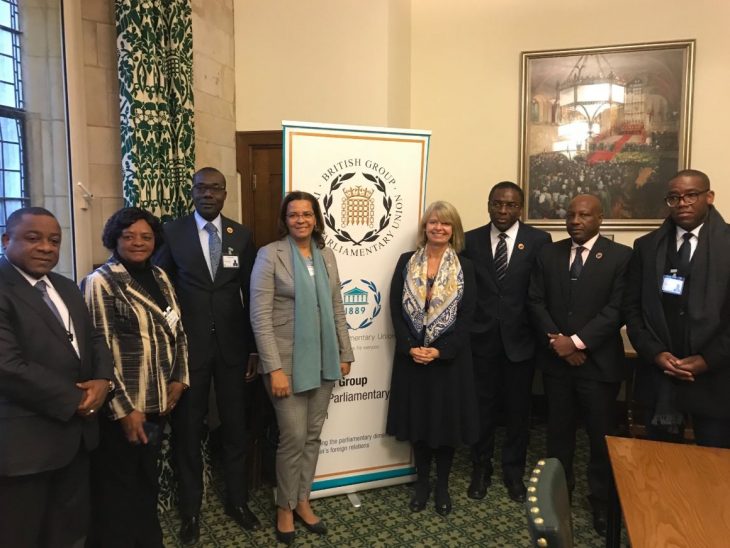 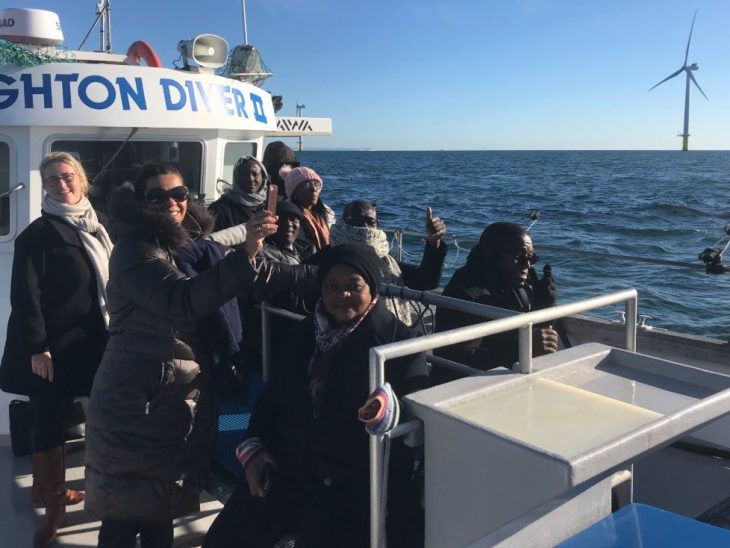 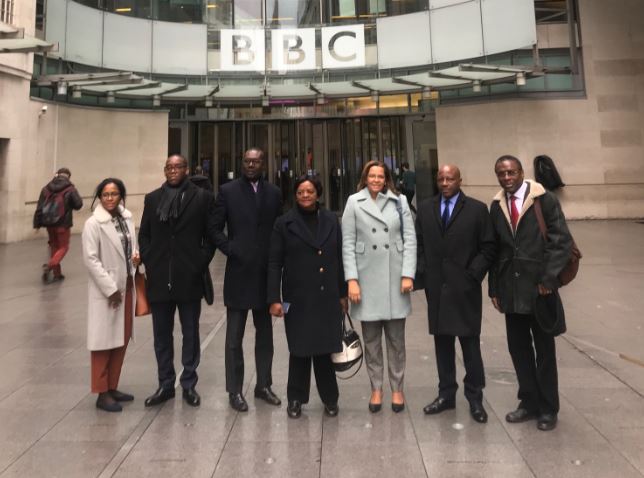 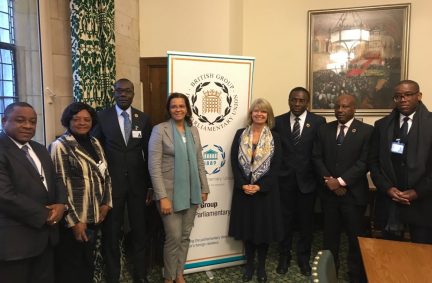 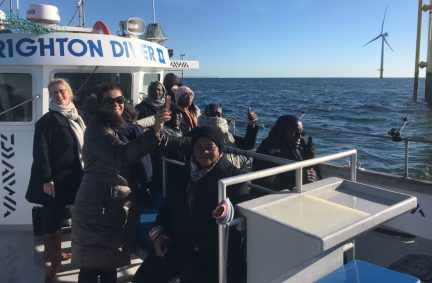 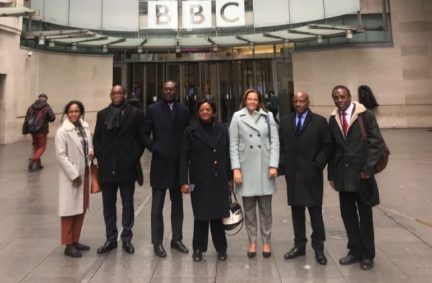 A parliamentary delegation from Angola visited the UK for a five-day visit from 29 October to 2 November 2018. This visit cemented the already strong links between the Angolan National Assembly and the UK Parliament, and followed a UK delegation’s visit to Angola in 2015. Since then, the country has seen substantial political change and reform, with the most notable change being the change in President in 2017 when João Lourenço came to power.

The visit was led by Ms Marie Idaline de Oliveira Valente, President of the Angolan IPU branch. She was joined by a cross party delegation made of MPLA and UNITA deputies – Miraldina Olga Marcos Jamba, Felino Job, N´vunda Benvindo das Neves Salucombo, Dr Luís Gomes Sambo and Amílcar Campos Colela – with Veronica Ribeiro accompanying the delegation from the National Assembly. His Excellency Rui Carneiro Mangueira, Angolan Ambassador to the UK, and Cristiano Diogo, Embassy of Angola, also joined for most of the visit.

Upon arrival to Westminster on 29th October, the delegation was given a welcome introduction by BGIPU Director Rick Nimmo, after which Matthew Hamlyn, Clerk of the Overseas Office, gave an overview of the Westminster System and the procedure of the House. As the delegation were to observe the Chancellor of the Exchequer’s Budget Statement, Matthew explained the history of the statement and how parliament was able to scrutinise and debate the Budget during such a time. The delegation then had a meeting with Majda el Bied and Charlotte Egan from the Westminster Foundation of Democracy (WFD) as they had recently returned from a scoping visit to Luanda. It is hoped that a WFD programme will be established in Angola and so this meeting not only allowed for continuation of talks between WFD and the National Assembly, but also allowed for WFD to discuss examples of their work in other countries, with Mozambique being the most relevant in this case.

The delegation was hosted by James Duddridge MP over lunch, who was joined by Kate Green MP, Chris Matheson MP and Rt Hon Baroness D’Souza CMG, where discussion centred on the significant political changes in Angola and the fight against corruption which was being pursued at all levels of society. Of key interest to the UK Members were the high-profile corruption cases, which were seen to be a symbol of the dedication to the anti-corruption agenda followed by the governments. After lunch, the delegation visited the UK Parliament’s Education Centre, where they learned about parliamentary outreach and engagement for school children of all ages and how this is used by schools not just in London but across the whole country. Following this visit, it was time for the Budget Statement so the delegation observed this from the Speaker’s Special Gallery in the House of Commons. They were then able to view the response to the Budget from the Leader of the Opposition, Rt Hon Jeremy Corbyn MP.

Harriett Baldwin MP, Minister of State for Africa at the FCO, then met with the delegation. She outlined the UK’s priority issues in the coming years, especially in regards to Brexit, and then discussed the relationship between UK and Angola. Discussion looked at changes in Angola as well as post-Brexit opportunities between the two countries, especially with regards to agricultural trade. The first day of the programme ended with a welcome reception hosted by Rt Hon John Whittingdale OBE MP.

On Tuesday 30th October, the delegation was given a tour of parliament by Fabian Hamilton MP, after which the Co-Chair of the Africa APPG, Lord Chidgey, led a roundtable with Members of both Houses focussing on a number of issues. These ranged from health, education, anti-corruption, economic development and UK-Angola relations in general. This was attended by many UK parliamentarians, highlighting the importance with which UK-Angola relations are considered in the UK parliament. The delegation then had a meeting with the Chairman of Ways and Means, Rt Hon Sir Lindsay Hoyle MP, who discussed his role in the Chamber and with regards to the Budget, as well as other responsibilities he has around the House of Commons. Kate Green MP then met with the delegation to discuss her role as the Chair of the Committee on Standards and also to discuss how the committee system in the UK Parliament works in general. This was a useful exchange for the delegation given the differences which exist between the UK and Angolan systems.

Following this meeting, the delegation was hosted for lunch by Laurence Robertson MP, who was joined by Rt Hon Baroness Northover. The focus of discussions centred heavily on trade opportunities, especially given Baroness Northover’s role as UK Trade Envoy to Angola and recent visits to the country. Discussions on trade continued into the afternoon, with Angus MacNeil MP, Chair of the International Trade Committee, meeting the delegation to discuss the role of the committee and prospects of trade between Angola and the UK in a post-Brexit landscape. Faisal Rashid MP also joined Angus for this meeting. The final meeting of the day was with Members of the Lords International Relations Select Committee – Rt Hon Lord Jopling, Lord Hannay and Rt Hon Lord Grocott, which allowed for Ms Valente to give a substantial overview of Angola’s priorities and challenges in the coming years.

On Wednesday 31st October, the delegation first met with Lord Crisp, Chair of the All-Party Parliamentary Group on Global Health, where Dr Sambo provided an overview of the current health challenges facing Angola and the need for improved infrastructure and training at all levels of the health sector. Lord Crisp was able to detail the Nursing Now campaign which many countries have adopted. This campaign aims to raise the status and profile of nurses, which will have a significant benefit to health sectors. The delegation then had a one on one meeting with Rt Hon Baroness Northover to go over the UK’s priorities and challenges of trading with Angola, after which the delegation viewed the International Trade Committee in session.

It was then time for the delegation to view Prime Minister’s Question Time and then they attended a working lunch hosted by Rt Hon Baroness Northover. She was joined by Rt Hon Lord Grocott, John Mann MP and Rt Hon Lord Steel of Aikwood, all of whom have visited Angola as part of a BGIPU delegation visit. After lunch the delegation departed Westminster for a roundtable at Chatham House. Ms Valente presented an overview of the significant change the country had been going through in recent years, which was followed by a question and answer session. This focussed on issues such as education and educational funding, loans from multilateral donors and the sustainability of this practice, press laws and freedom and speech, municipal elections in Angola and the role of civil society in Angola.

The following day, the delegation visited the BBC for a meeting with the Africa team at BBC World Service. This meeting focussed on the World Service’s programming in Africa and significant efforts to stop ‘fake news’, as well as quick tour of the BBC. A private lunch was then organised with Invest Africa, with several prominent business stakeholders in attendance to discuss the ease of doing business in Angola and possible business opportunities in the future.

The delegation then travelled to Brighton, where they were joined for dinner by former BGIPU Chair and MP, John Austin. The following day, the delegation was given a tour of Rampion Wind Farm, Europe’s largest offshore windfarm, which sparked a conversation on the possibility of establishing similar windfarms off the coast in Angola. Currently, Angola is predominantly investing in solar energy. The local MP, Lloyd Russell-Moyle MP, met with the delegation in his constituency office. He gave an overview of how he worked in the constituency as well as focussed on key issues which affects his constituents. He was also able to discuss pressing national issues, such as universal credit and Brexit, and explain how local councils work alongside Members of Parliament.

This inter-parliamentary visit was a success in consolidating the strong relationship enjoyed between the UK and Angola, and BGIPU looks forward to reconnecting soon with the National Assembly through another UK visit in due course to Luanda. 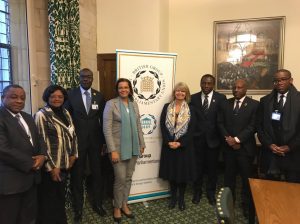 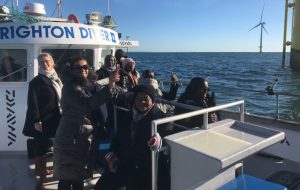 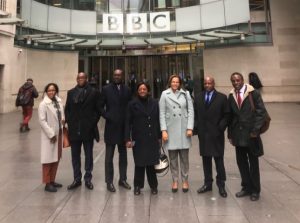