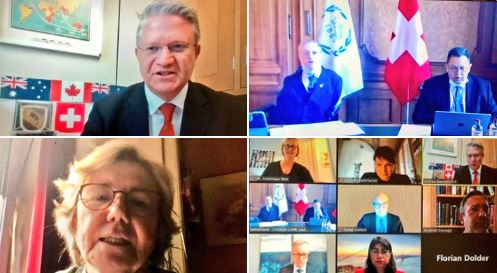 On 24 February BGIPU hosted a virtual bilateral meeting between UK and Swiss Parliamentarians with the UK side led by Andrew Rosindell MP, Chair of the Swiss APPG.

The Chair opened the discussion by emphasising how important the relations between the two countries are, particularly at the moment. Tim Loughton MP provided an update on the progress of vaccination programmes, highlighting how, despite the UK having the highest number of fatalities in Western countries, the rollout of the vaccine was a great success thanks to the early procuring of vaccines. He added that about 1/3 of the adult population had had their first vaccination which put the UK way ahead of any other European Country, and just behind Israel. Christian Lohr, current President of the Swiss Group of the IPU, explained that Switzerland had been badly affected from mid-October due to the virus mutations and new lockdown measures came into place from January. GDP was expected to decline by around 3.3% and unemployment rate was expected to average 3.2% for the year. He added that Switzerland started the rollout of vaccines on 4 January and that the speed at which vaccinations were being administered varied from canton to canton and is the subject of much debate. So far a total of 675.000 vaccinations have been caried out and 173.000 people have been fully vaccinated.

The discussion then moved on to Swiss – UK relations post Brexit and the implications and opportunities following Britain’s departure from the EU. Delegates from both countries stressed how important it is now that the two countries work very close together particularly in the financial sector and education. Senator Jositsch informed Members that there is currently an ongoing discussion in the Swiss Parliament on how to develop the relationship between the two countries and that there wasn’t a final decision yet.

Tim Loughton MP outlined the UK’s plans for hosting COP26 in Glasgow this year and added how the Prime Minister was very committed to the COP agenda and that a lot of investment is being put into environmental measures. Part of the build back better is to build back greener, he said. Councilor Christian Lohr agreed that Climate Change is a major issue in Switzerland and informed them that Switzerland submitted last December an ambitious plan for combatting climate change and remains fully committed to make COP 26 a great success. He explained that the country committed to climate neutrality by 2050, which is an increase on its previous objective of a 70-85% emissions reduction by 2050.

Both delegations were grateful for the opportunity to exchange ideas and hoped for more chances to meet in the near future for fruitful debates during a time where the two countries are in a fairly unique situation. 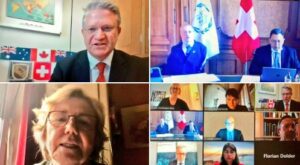 On 24 February BGIPU hosted a virtual bilateral meeting between UK and Swiss Parliamentarians with the UK side led by Andrew Rosindell MP, Chair of the Swiss APPG.