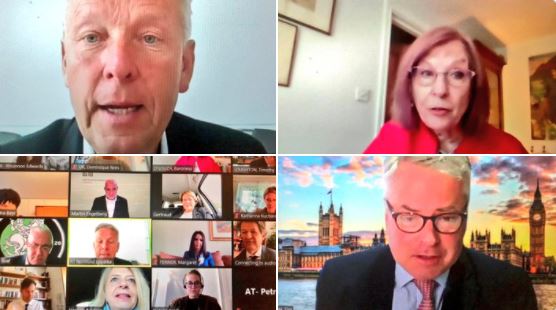 On 27 May inthe margins of the 142nd IPU Assembly, UK Parliamentarians met virtually with members of the Austrian Parliament chaired by BGIPU Vice-Chair Rt Hon Baroness D’Souza with the Austrian side led by the Chair of their IPU Group Dr Reinhold Lopatka

Baroness D’Souza welcomed everyone to the meeting and Dr Lopatka began by touching on the work that was happening as part of the assembly, including the coordinated efforts of the 12 Plus group, and the good work of the new IPU President, a 12 Plus member. He noted that Austria was sad to lose the UK in the EU, but that he wanted to focus on a good working relationship moving forward. He said it was important to cooperate on issues such as security and terrorism, and also the policies on Russia and China. The Austrians were worried about the Erasmus scheme no longer running, but UK Parliamentarians assured them that there would be a new global scheme which would be of better value to those from a poorer socio-economic background. There would also be a separate scheme from Ireland, Norther Ireland, Scotland and Wales.

The issue of sanctions on UK Parliamentarians, and others in Europe by China was an important issue to all. Tim Loughton MP said he had likely been sanctioned due to his chairing of the Tibet APPG and having spoken against China for many years. He explained that there were now weekly debates on China in the House of Commons, and that sanctions had been brought against Chinese officials under the Magnitsky Act. Harriett Baldwin MP explained that the 12 Plus group had raised this issue at the Assembly, and that China had been angry in their response. It was agreed that China made a miscalculation on this, and that even the IPU President had defended the rights of Parliamentarians to speak on important issues without fear of sanctions. The Austrians stated that they were trying to make it easier for Chinese citizens to leave and get an Austrian Visa. It was also suggested that an international delegation should travel to China, possibly under IPU auspices. Tim Loughton MP also said in terms of COP26 it was important to have united voice against China as the Tibetan Plateau was getting increasingly damaged due to climate change.

The issue of Covid was raised, with British parliamentarians asking about the vaccine rollout in Austria. The Austrians disclosed that now 3.7m had now had at least one vaccine, although the EU was behind the UK in the distribution of vaccines. Austria planned to have a vaccine passport in place by July and hoped that tourism would resume as it accounted for 15% of Austrian GDP. Baroness D’Souza asked about the effect on lower income people when it came to Covid, but Dr Lopatka explained that a lot of public money had been spent on helping people and that no one was left behind.

The issue of the Istanbul Convention was raised by Ms Petra Bayr who asked why the UK had not ratified yet. It was explained that this was due to unresolved domestic compliance issues related to implementation of obligations in the devolved nations, but that the UK had recently passed a key Domestic Violence Bill, and the Home Affairs Committee were doing a report on sexual violence against women.

The meeting concluded with both sides agreeing how important it was to have meetings such as this, and Mr Martin Engelber who is Chair of the Austria-British Friendship Group invited any British colleagues planning a trip to Vienna to meet with him. Dr Lopatka also noted Austria was hosting the IPU World Speakers Conference and Counter Terrorism conference in September, and BGIPU Secretariat confirmed it hoped to send a delegation. 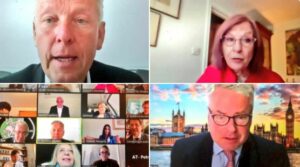 On 27 May inthe margins of the 142nd IPU Assembly, UK Parliamentarians met virtually with members of the Austrian Parliament chaired by BGIPU Vice-Chair Rt Hon Baroness D’Souza with the Austrian side led by the Chair of their IPU Group Dr Reinhold Lopatka