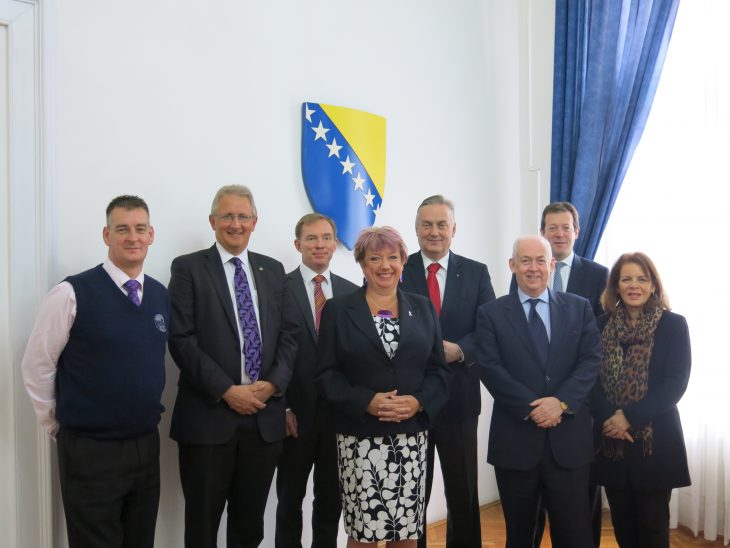 From 30 September – 4 October a UK Parliamentary delegation visited Bosnia and Herzegovina hosted by the Parliament of BiH, followed a visit of the Bosnian IPU Group to the UK in June 2012.

From 30 September – 4 October a UK Parliamentary delegation visited Bosnia and Herzegovina under the auspices of the British Group Inter-Parliamentary Union. The visit, hosted by the Parliament of BiH, followed a visit of the Bosnian IPU Group to the UK in June 2012.

As part of ongoing work in the Balkans and Bosnia in particular, through the BGIPU and the APPG for Bosnia and Herzegovina, this was a visit for parliamentarians to see for themselves the issues and concerns surrounding the area. The programme was extremely busy for the 5 days we were there and we met many politicians and visited not only Sarajevo but Mostar and Banja Luka.

The Delegation’s visit came at a very interesting point, as negotiations regarding BiH’s European Union accession process, NATO and Council of Europe membership all took place whilst we were in Sarajevo. Indeed we met with the Foreign Minister Mr Lagumdzija, following the High Level Dialogue on the Accession Process which took place in Brussels on 1 October between representatives of the European Commission, and institutional and political leaders from Bosnia and Herzegovina, and he was able to discuss with the Delegation the discussions and outcomes of this meeting the following day.

The High Level Dialogue meeting posed the question of how to resolve the contentious issue of the European Court of Human rights Sejdic-Finci ruling which would require changes to the Bosnian Constitution (as established under the Dayton Agreement), in order to allow any Bosnian citizen to stand for the Presidency, which under current eligibility requirement is limited to only representatives of the country’s three constituent peoples. Another topic for discussion was the need for BiH to have a more streamlined and coherent cooperation mechanism for dialogue with the EU on the Accession process. The Meeting outcome is available here.

These discussions were central to the programme, during which we met many politicians from most of the main political parties, the Foreign Affairs Committee in the National Parliament and outside of Sarajevo at the local and entity level we were able to meet the Prime minister and President of the Federation of BIH, the Mayor of Mostar and the President and Prime minister of the Republic of Serbska.

I think it is fair to say that we had some very frank discussions with many of the leading opinion formers and got an understanding of the problems the country are facing.

We were of the opinion that they needed to move on as had other countries in the region and a stable government was needed.

The Ambassador and his team were working extremely hard to try and help them get a solution to some of their problems but the situation was becoming more difficult as time goes by. It was also evident that the parties and entities needed to work closer together but were reluctant to do so.

In conclusion we had a very interesting and informative trip and I know my colleagues certainly learnt a great deal more about the country. I would especially like to thank Steph Kenyon who accompanied us and Nigel Casey the British Ambassador for all their help and advice which was invaluable. 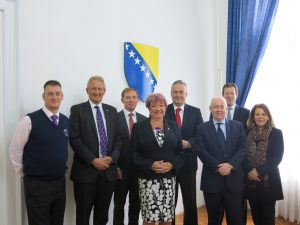 From 30 September – 4 October a UK Parliamentary delegation visited Bosnia and Herzegovina hosted by the Parliament of BiH, followed a visit of the Bosnian IPU Group to the UK in June 2012.