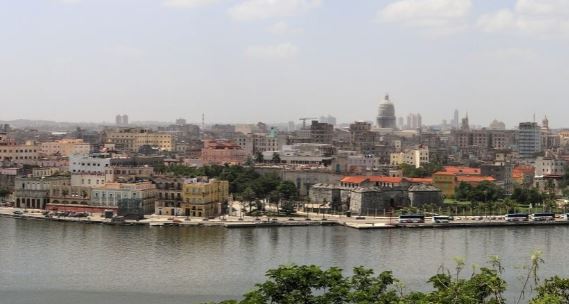 There appear to be two different types of co operative in Cuba, those in urban areas, such as this, whose role is to supply their local community and those in rural areas , whose function is to supply more generally. The government are also currently undertaking a process of giving land to people to set up small farms or co operatives but with the proviso that it must be in production within a specified time.

The visit to the farm gave a fascinating insight into the production of fruit and vegetables in Cuba. We met and were shown around by Miguel Angel Salcine Lopez, President of the Co – operative, who was clearly a very dynamic and committed leader of the enterprise. He did say to us that he had spent many years in the Cuban Ministry of Agriculture , or “wasted his best years” as he put it, but was very much in his element running the co operative.

The enterprise supplies fresh fruit and vegetable to the local population through an on site shop. They also produce medicinal plants and plants used in local African religions. They are also now branching out with a small unit creating value added produce, eg Garlic paste.

Snr. Lopez pointed out that the co op had a vital social importance in creating employment, at present there are 130 workers, of whom 42 are women and they also involve many senior citizens whose experience is invaluable and also allows them to contribute to household earnings. There were, however, also 22 university graduates members, 40 with “middle level” education and the remainder had reached between grades 9 and 12.

It appears from the information we were given that there has been a fairly steady rise in production and profit over the years, although the new regulations regarding commercialisation have hit turnover and profit more recently.

The co op was clearly a very vibrant enterprise with production of fruit and vegetables both outdoors and in greenhouses, which although very intensive was done organically. They had an onsite wormery enabling them to manufacture their own compost and a greenhouse for producing seedlings both for themselves and other producers. As well as training their own members they also helped exchange information and techniques with other co operatives.

Clearly thought was also going into the health benefits of their produce including one herb which they said had more calcium than milk and a wide variety of vitamins.

The co op may have been forced to go organic due to necessity but Snr. Lopez was clearly enthusiastic with the system and pointed out it was much cheaper to farm organically than with chemical inputs, quite the reverse of what we see here. As in many areas of life in Cuba it was intriguing and impressive to see what they are managing to achieve with so little. 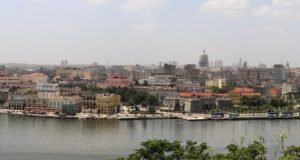