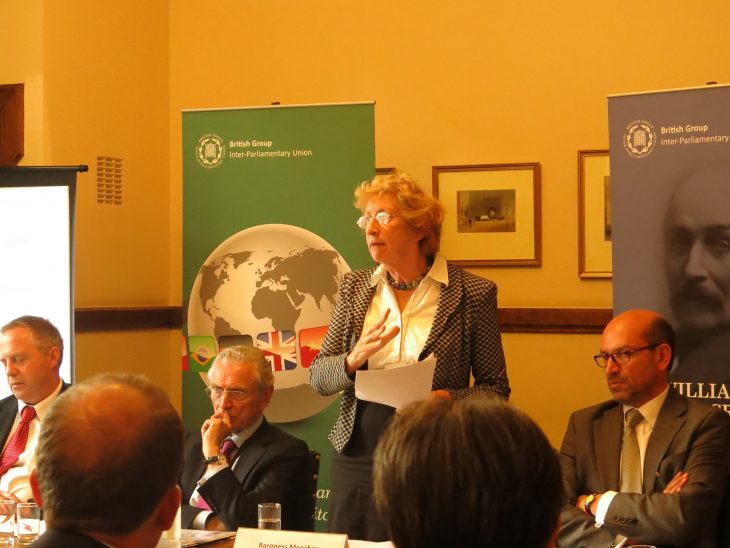 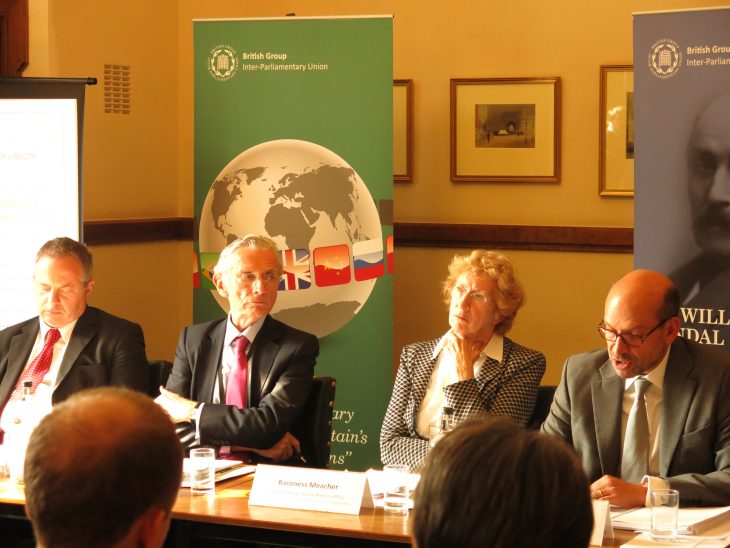 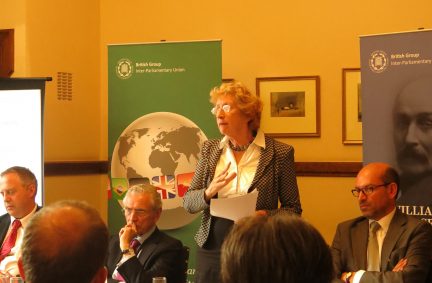 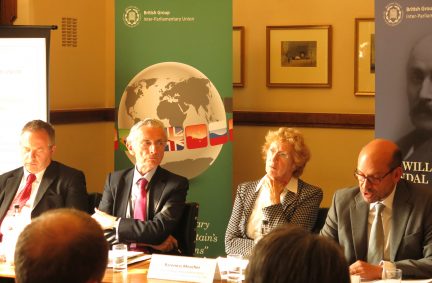 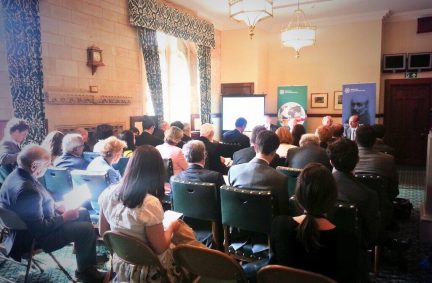 The British Group of the IPU, hosted a lecture on the 26th of June, to mark the International Day Against Drug Abuse and Illicit Trafficking and ahead of the International Parliamentary Seminar on Drug Policy Reform it will host from the 28 – 30 October. The panel was chaired by Lord Fowler, former Secretary of State for Health, and comprised His Excellency Mr Mauricio Rodríguez Múnera, Ambassador of Colombia to the UK, Baroness Meacher, Chair of Drugs Policy Reform APPG and John Mann MP. The aim was to introduce the recently launched Organization of American States report on the Drug Problem in the Americas and discuss the role of British parliamentarians in assisting global efforts to address illicit drugs and related-transnational crime issues, from the point of view of the UK parliamentary envoys to the 43rd General Assembly of the OAS.

H.E. Mr Mauricio Rodríguez Múnera, in his capacity as Colombian Ambassador to the UK, talked about how the President of Colombia, Juan Manuel Santos, has been leading an international discussion about alternative solutions to minimizing the harm produced by global drug production, trafficking and consumption. He summarized his five key ideas:

1) The approach to eradicating drugs so far has failed to curb production and violence in Latin America and restrict global consumption and has diverted money that should have been invested in social priorities such as health and education for the poorest.

2)  Drug addiction should be treated as a health problem, not as a criminal issue.

3)  Greater efforts for the prevention of drug consumption were needed to address the root causes such as poverty, unemployment, alienation and dysfunctional families.

4) An evidence-based approach to these issues, led by experts and not by ideologies, must be pursued.

5) Policy experimentation should be endorsed if it will produce the best options to minimize the harm that drugs create.

The Ambassador explained that President Santos´s proposal for the OAS to undertake a special report on the drug problem and the possible new strategies to confront it, came about from the Americas Summit Colombia hosted in 2012, backed by 34 Heads of State including President Obama. The document was completed in May 2013 and is comprised of an analytical report of the current situation of the international drugs problem and a scenarios report which provides a description of four scenarios according to key experts.

Ambassador Rodríguez Múnera said that the members of the OAS want this document to be the basis for an informed global debate that will generate an improved response to the drug crisis and help progress alternatives to the war on drugs ready to be discussed next year in Vienna and in 2016 by the UN General Assembly. He mentioned that the British Parliament has supported this effort, through Baroness Meacher, Chair of the Drug Policy Reform APPG, and the Home Affairs Select Committee, led by Keith Vaz MP, who have produced very interesting and useful contributions to the discussion of new formulas to minimize the harm produced by drugs.

He explained that the “Scenarios for the Drug Problem in the Americas, 2013 – 2025” report was produced by a team of multi-sector experts – including former and current government officials from across the Americas. It is based on their own diverse experiences and knowledge, drawing on the Analytical Report prepared by a team of leading experts, and on a set of interviews made to 75 leaders from across the Americas, including current and former Heads of Government. It aims to provide a common framework and language to support dialogue, debate, and decision-making among Heads of Government and other actors, within and across countries.

In brief, the first scenario, called “Together”, emphasises shifts from controlling drugs to preventing crime, vio­lence, and corruption. The second scenario, named “Pathways”, emphasises some countries’ pursuit of gradual, evidence-based experimentation and reform, while others maintain current legal, regulatory, and policy frameworks and focus their energies on demand reduction programs through prevention and alternatives to incarceration. The third scenario is named “Resilience” where the solution to the hemispheric drug problem can be found through social investment at the community level, targeting problematic drug use, dysfunctional families, unem­ployment, etc. In the last scenario, called “Disruption”, some governments possibly reach tacit agreements with trafficking organizations to not severely impede drug transit, in exchange for a relative internal ‘social peace’.

Follow these links for the analytical report and the scenarios report, or their summary.

Baroness Meacher, chair of the Drug Policy Reform All-Party parliamentary Group went on to report back on her impressions as parliamentary envoy to the 43rd General Assembly of the OAS. She reflected that the US-backed report and discussions at the latest OAS Assembly in Guatemala represent a shift in the balance of opinion (if not also to some degree, power) in this debate in the Americas.  She said that although not explicitly presented as such, the report makes a clear recommendation i.e. scenarios one, two and three must be implemented otherwise we meet scenario four. In other words there is a necessity to build institutions in Latin American states and to experiment with alternative policies and to deal with poverty and literacy to tackle the human cost of drugs. She said there seemed to be a general consensus on the need to tackle corruption in government institutions and to use evidence-based policy.

The fact that US Secretary of State John Kerry welcomed the debate on drugs, she said, suggests that the full political spectrum of the USA is taking the issue seriously and supports the idea of better collaboration in regional policy. She also stressed that for the first time, the USA have accepted drugs as a health problem, which is a major step, not least because some of the impacts will now be covered by health insurance.

She referred to the different levels of confidence on the impact the report will have and the fact that the decision on the OAS future discussions has been delegated to the OAS in Washington. She concluded by highlighting the work of the Drug Policy Reform All-Party Parliamentary Group to involve 20 countries in the follow up of the OAS meeting. Click here for her full report on the OAS General Assembly in Guatemala.

The final presentation was from John Mann MP, also a parliamentary envoy to the 43rd General Assembly of the OAS in Antigua. He was pleased to have had the experience of meeting drug policy experts across the world, saying that different eyes see different things. Mr Mann saw a different perspective to drug policy at the OAS Assembly, coloured by the fact that the documents at the meeting were mainly about cocaine and marijuana. He also came away with the impression that there is a consensus in the Americas on the importance of building institutions and good governance with a view that stability leads to true democracy. However there is not a consensus on how to go about it. He said the two most outspoken countries were Nicaragua (drug transit) and Peru (producer). He agreed with Baroness Meacher that the recognition of drugs as a health issue represents a major shift in the general mindset and that this holds the potential of a shift in policy outcomes. He said the desire for evidence-based policy is undisputed as is the aim to deal with the root causes of the problem. However there was division on how experimental to be, noting a specific resistance among Caribbean nations.

Mr Mann said that there was agreement that the war on drugs had not failed but the war on drugs had changed and that problems have to be dealt with at consumption level which was not the same as decriminalizing drug consumption. He said that intervening with drug production affects the price and profitability possibly increasing criminality, noting that cocaine in particular is price sensitive. He said the expense of previous approaches is the reason why the US has shifted its mindset to a health-based approach to drugs. He concluded by emphasising the huge role synthetic drugs will now come to play in the drug market and the need to keep these developments in mind. 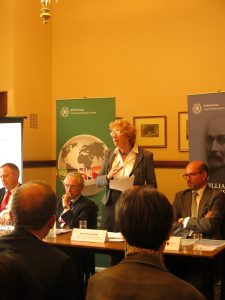 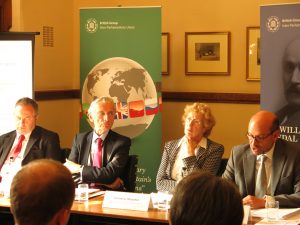 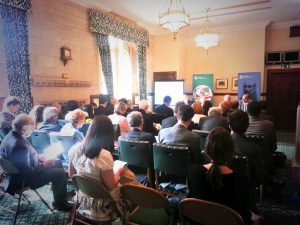