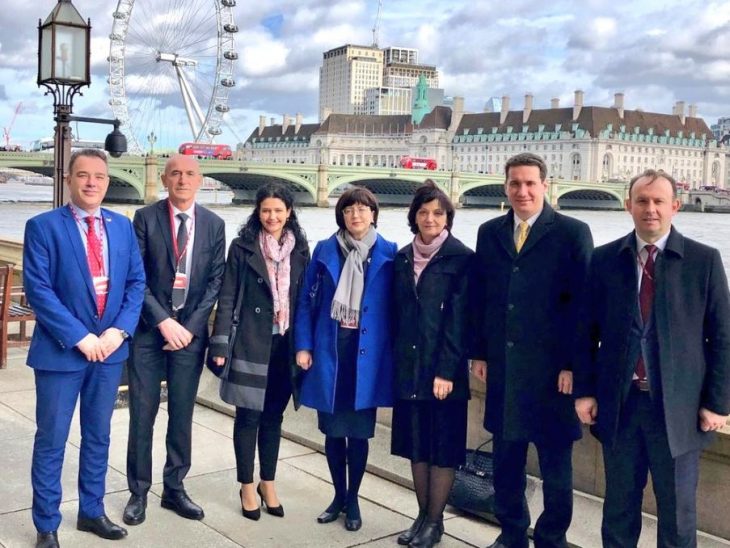 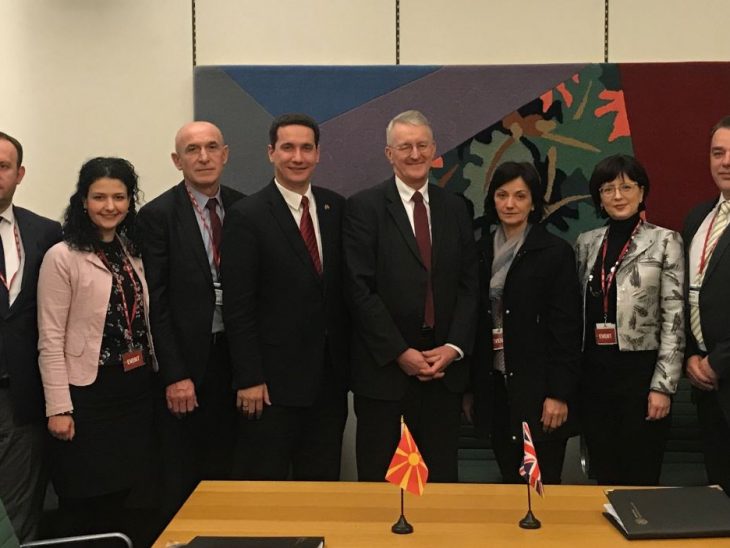 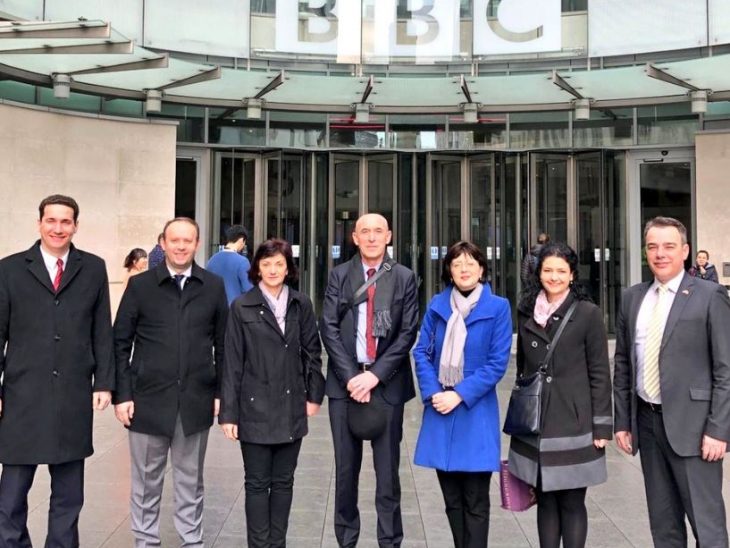 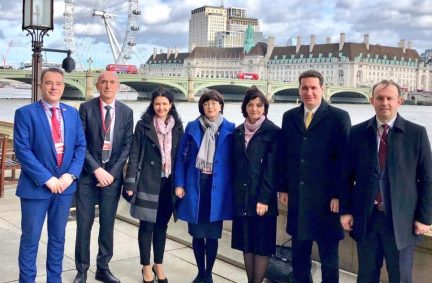 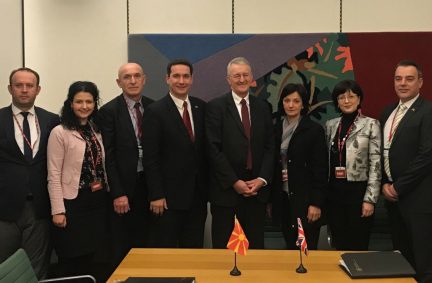 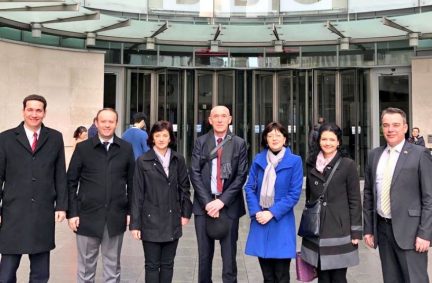 A parliamentary delegation from North Macedonia visited the UK for a three day visit from 4 to 6 March. This visit cemented the already strong links between the Parliament of North Macedonia and the UK Parliament and was a very timely visit given that the Prespa Agreement had recently been agreed and the bilateral dispute between Greece and North Macedonia was now resolved.

The visit was led by Mr Dime Velkovski, who was joined by Mr Afrim Gashi, Ms Shpresa Hadri, Mr Vladimir Gjorçev and Mr Surija Rashidi. The delegation was accompanied by Mr Rexhep Prekopuca from the Parliament of North Macedonia as well as Her Excellency Ambassador Miovska, who was joined by Ms Katerina Mihajlova and Mr Jasmin Khajil from the Embassy of North Macedonia.

Upon arrival to Westminster on Monday 4th March, the delegation was given a welcome introduction by BGIPU Director Rick Nimmo, after which Matthew Hamlyn, Clerk of the Overseas Office, gave an overview of the Westminster System and the procedure of the House. The delegation then had a meeting with the Foreign & Commonwealth Office, where the UK Government’s priorities were highlighted and there was the opportunity for an exchange on mutual areas of importance and concern between the UK and North Macedonia.

The delegation were hosted by Rt Hon John Whittingdale OBE MP over lunch, who was joined by Baroness Hooper CMG, Rt Hon Lord Dholakia OBE DL and John Grogan MP. This was a good opportunity to update UK Members on the Prespa Agreement itself and how the Parliament of North Macedonia viewed the name change of North Macedonia and the various implications of this. After lunch, the delegation met with Lord Boswell of Aynho, Chair of the European Union Select Committee in the House of Lords, met with the delegation alongside Lord Jay of Ewelme. This meeting was key for highlighting what kind of relationship UK Members envisaged for the relationship between the UK and the EU in the future and for providing the delegation with an insight into the work of the EU Select Committee, given that North Macedonia will soon open its accession process to the EU.

This meeting was followed by a meeting with Rt Hon Lord Howell of Guildford, Chair of the International Relations Select Committee, and Members of the Committee, Baroness Coussins and Rt Hon Baroness Anelay DBE. This meeting allowed for a broader exchange on key international relations issues, such as the Prespa Agreement, regional issues in the Western Balkans and broader issues concerning the EU. After this meeting, the delegation met with Kate Green MP, Chair of the Select Committee on Standards, who was able to touch upon the important role played by this Committee and how it fits in with the larger role played by parliamentarians and parliament in general. The first day of the delegation’s programme concluded with a welcome reception, hosted by Rt Hon John Whittingdale OBE MP, attended by many Members, including the Rt Hon Lord Robertson of Port Ellen KT who has played such an important role in North Macedonia and the Western Balkans.

On Tuesday 5th March, the delegation were given a tour of parliament by Chris Matheson MP, after which Rt Hon Baroness D’Souza CMG chaired a roundtable with Members of both Houses focussing on a number of issues. These ranged from political, social and economic issues but of key importance was the discussion, led by Baroness D’Souza and Baroness Barker, which looked at the Anti-Discrimination legislation being held up in the Parliament of North Macedonia. There was a frank discussion on the importance of this legislation passing with importance placed on the LGTBI protections. Upon the delegation’s return to North Macedonia, it is worth noting that this key piece of legislation passed through the parliament, providing the relevant protections to the LGBTI community and others to be protected from discrimination.

The delegation then had a meeting with the Chairman of Ways and Means, Rt Hon Sir Lindsay Hoyle MP, where there was a focus on the role of the Deputy Speaker as well as bilateral exchanges. This meeting was followed by a lunch hosted by Martin Vickers MP, Chair of the North Macedonia All-Party Parliamentary Group, which was attended by Alex Sobel MP, Rt Hon Lord Grocott and Lord Balfe. The delegation then met with Shadow Minister for Europe, Khalid Mahmood MP, where there was a discussion on the mutual priorities and concerns facing both the UK and North Macedonia and future cooperation between the two countries.

Following this meeting, the delegation met with Angus MacNeil MP, Chair of the International Trade Committee. This meeting focussed on trade between the UK and North Macedonia and how the trading relationship is very important to North Macedonia. There was some concern about how this relationship would look in the future, especially with regards to the interim period when the UK has left the EU but North Macedonia has not yet joined the EU. Tim Loughton MP, Member of the Home Affairs Select Committee, then met with the delegation to discuss the role of this Committee as well as other domestic issues in the UK, such as the rights of children and family life.

The delegation then visited the House of Lords in session to observe the debate, which was noted as being drastically different from the style of debate in the House of Commons. The second day finished with a meeting with Sir Bernard Jenkin MP, Chair of the Public Administration & Constitutional Affairs Select Committee. He provided a brief overview on the role of the committee and the use of referendum with the delegation – given that both the UK and North Macedonia have each used a referendum for constitutional purposes in recent years – which was followed by a discussed on the various challenges and opportunities posed by the current Brexit situation.

The third and final day of the programme began with a meeting at the BBC World Service, where the delegation were able to encourage the BBC to restart their services in Macedonian which had been cancelled some time ago. There was then a short tour of the BBC news room, after which the delegation returned to the UK Parliament to observe Prime Minister’s Question Time. Following this, the delegation were hosted for lunch by Rt Hon Baroness Anelay DBE, which was joined by Madeleine Moon MP, Rt Hon Lord Randall, Lord Kilclooney, the Earl of Sandwich, Geraint Davies MP and Richard Graham MP. Given Ms Moon’s role as President of the NATO Parliamentary Assembly, there was a substantial discussion on the role of the NATO Parliamentary Assembly as well as broader security concerns.

Discussion of these issues were continued after lunch when the delegation met with Rt Hon Kevan Jones MP, the Deputy Head of the UK Delegation to the NATO Parliamentary Assembly, and with Mark Pritchard MP, Leader of the UK Delegation to the OSCE Parliamentary Assembly and Special Representatives on South East Europe. The final meeting of the visit was with Rt Hon Hilary Benn MP, Chair of the Exiting the EU Select Committee, where there was a frank discussion on both the UK’s scheduled departure from the EU but also the reasons for which North Macedonia wanted to join the EU. This was noted by the delegation as being because of the prosperity, stability and progress which would be offered by EU membership.

This visit was a success in solidifying the strong relationship enjoyed between the UK and North Macedonia, and BGIPU looks forward to being able to continue these connections in the years to come. 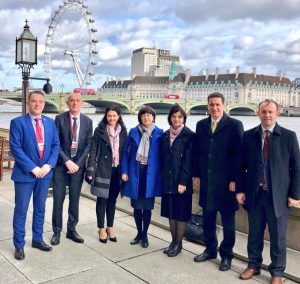 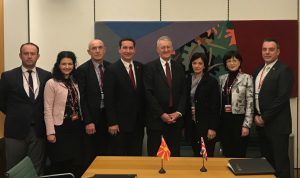 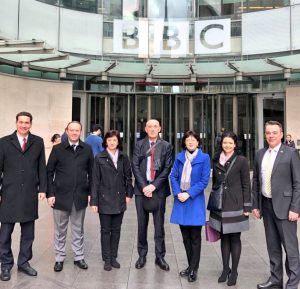