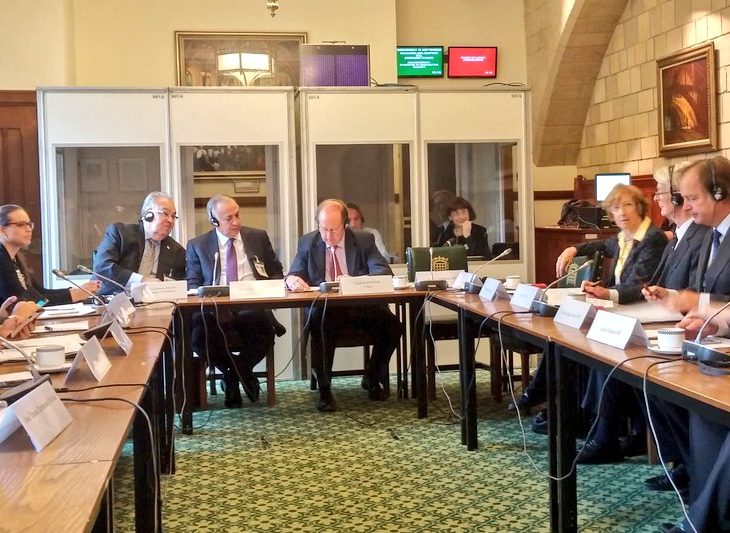 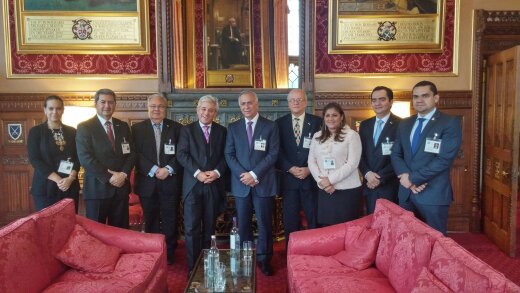 Meeting with the Rt Hon John Bercow MP, Speaker of the House of Commons 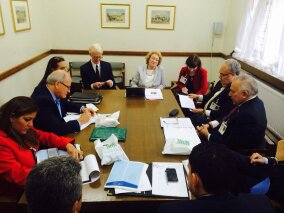 Discussion on prison reform with Baroness Stern and Lord McColl.jpg 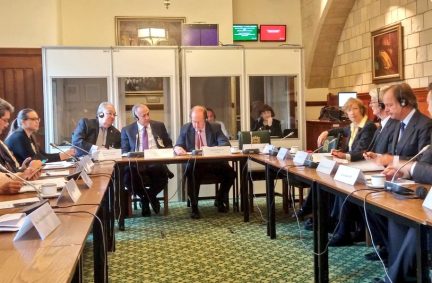 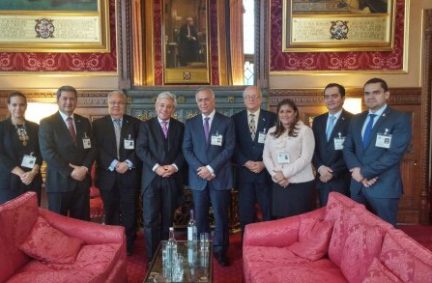 The delegation visited from 14th until the 18th of September and focused on further developing dialogue and cooperation with parliamentary counterparts, advancing the UK interests in Central America including through better appreciation of UK perspectives. They were greeted by the Chairman, Ways and Means and Deputy Speaker Rt Hon Lindsay Hoyle MP, and they met with representatives from various British civil society groups active in Honduras, who raised the importance of transparency in accounting for aid given to Honduras. They also met with representatives of British business interests in Honduras in a lunch hosted by Stewart Jackson MP, where the President of Congress stressed the importance of continuing to increase foreign investment in the agricultural and industry sectors. They visited the Foreign & Commonwealth Office where they met with the Deputy Director of the Central America Department, Alan Gogbashian, and then met with Stephen Gethins MP from the Foreign Affairs Select Committee before being hosted by Nigel Evans MP, Chair of the British Group IPU, in a welcome reception.

On Tuesday Chris Bryant MP offered them a tour of the Palace of Westminster in fluent Spanish and they went on to discuss prison reform with Baroness Stern, trafficking issues with Baroness Meacher and trade unions and work matters with Lord Foulkes of Cumnock. The UK counterparts were interested to hear the success of efforts in Honduras to address levels of violence and crime and provide more stable governance. On Wednesday Lord Northbrook chaired a parliamentary round table discussion, which the Rt Hon Hugo Swire MP, Minister of State for Foreign and Commonwealth Affairs, attended. The delegation called for increased UK trade and investment, noting there are a number of UK companies active in the country as a result of better economic growth and new opportunities opening up in the region. After watching Prime Minister’s Question Time, they met with Mr Speaker, Rt Hon John Bercow MP as well as the Lord Speaker, Baroness D’Souza, with whom they discussed the strengths of electronic voting systems.

On Thursday the delegation went to Belfast to visit the Northern Ireland Assembly were they met with members of the Legislative Assembly and with Mitchel McLaughlin, Speaker of the Assembly. They also visited the Police Service of Northern Ireland (PSNI) where Chief Inspector Gabriel Moran gave them an overview of their operations, and then the Police Ombudsman, where the Chief Executive and senior investigator explained their work. In the evening they met with Rt. Hon. Jeffrey Donaldson MP, Chairman of Causeway Institute and Ben Mallon, Programme Manager of Causeway Institute, where they spoke about peace building in Northern Ireland and beyond. The Belfast visit provided an opportunity for Honduran MPs to reflect on Northern Ireland’s experiences and similar challenges they face in addressing conflict issues and advancing police reform. Finally on Friday they met with Ian Paisley MP, who gave them a tour of North Antrim, his constituency and introduced them to Michele Knight-McQuillan, the Mayor of Ballymoney. 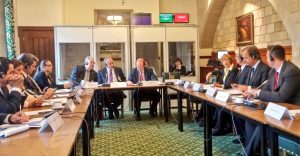 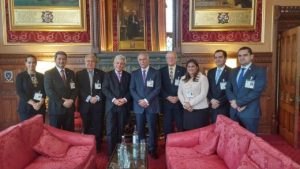 Meeting with the Rt Hon John Bercow MP, Speaker of the House of Commons

Discussion on prison reform with Baroness Stern and Lord McColl.jpg