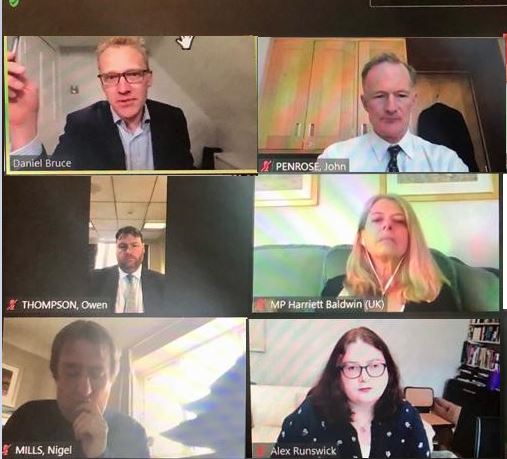 In partnership with Transparency International UK, BGIPU arranged on 14 April a virtual follow-up event to take up the key themes of the IPU’s Parliamentary Hearing at the United Nations “Fighting corruption to restore trust in government and improve development prospects” where the Chair of the global board of Transparency International had delivered the keynote address. The annual IPU/UN event was held in virtual format on 17-18 February to explore parliamentary perspectives in advance of the UN General Assembly Special Session (UNGASS) this year which for the first time would be focused on global measures to address corruption.

The discussion moderated by BGIPU Chair Harriett Baldwin MP, who was joined by John Penrose MP, the Prime Minister’s Anti-Corruption Champion, IPU/UN hearing participant, Owen Thompson MP, as well as Daniel Bruce, Chief Executive, and Alex Runswick, Senior Advocacy Manager from Transparency International UK. The BGIPU Chair noted the key aim of the event was to provide a review of key developments internationally on anti-corruption efforts leading up to UNGASS, identify areas where the UK is providing leadership internationally and where current global efforts might best guide improvements in UK national policy approaches for the future.

The UK’s Anti-Corruption Champion, John Penrose MP opened the discussion recognising the value of inter-parliamentary engagement on this issue, welcoming the priority the UN was now giving to global efforts to fight corruption was both timely and urgent, noting new priorities and issues globally brought to light by the global pandemic. In reviewing key developments, he highlighted in particular the importance of beneficial ownership transparency around the world to prevent illicit cash flows being hidden from view. He also said he hoped the new US Administration would make important contributions to global efforts given their commitments to reform and reinvigorating cooperation. Mr Penrose also highlighted new opportunities for the UK through the negotiation of post-Brexit free trade agreements where new anti-corruption standards might be set.

Daniel Bruce outlined the importance of addressing illicit cash flows and explained that money laundering had huge costs globally with an estimated £100 billion in “dirty money” passing through the UK each year. He spoke about three key steps being to ensure corrupt actors have nowhere to hide the money, nobody to help them subvert the law and no impunity for corrupt practices. Mr Bruce noted that alongside strengthened rules and legislation, improved company ethics and commercial standards or practice were also crucial in combatting corruption.

Owen Thompson MP welcomed the level of interest in tackling corruption from so many countries that attended the IPU Hearing and highlighted just how much still needed to be done to fight corruption. He highlighted the need to increase public confidence in the work of politicians, the importance of the scrutiny role of members, including after the event if urgent decisions were required at pace as was clearly the case in the pandemic. He said transparency, openness and accountability should always exists, regardless of any challenges and new complications like increasing global fake news and disinformation, creating new obstacles to global efforts.

Alex Runswick highlighted the issue of lobbying and improper interaction between commercial activity and politics saying that while lobbying remained an important part of any democratic process, there needed to be complete transparency and credibility in the accountability process. It was vital the public could retain trust in the processes by which policy and spending decisions were taken. She said this was undermined if systems broke down or were not followed in a timely manner, highlighting areas where improvements in the UK could be made.

Responding through Q&A, the meeting provided participating members from across the political spectrum a welcome opportunity to hear more on current global efforts leading up to UNGASS, to reflect upon the UK’s national anti-corruption policies and the contributions the UK could made globally, including through the IPU but also key UK engagement with Commonwealth partners, and to underscore the importance of effective anti-corruption measures at home and abroad to retain public trust and avoid the economic costs of corruption on the global economy. 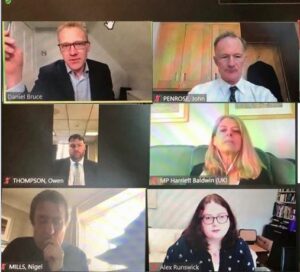