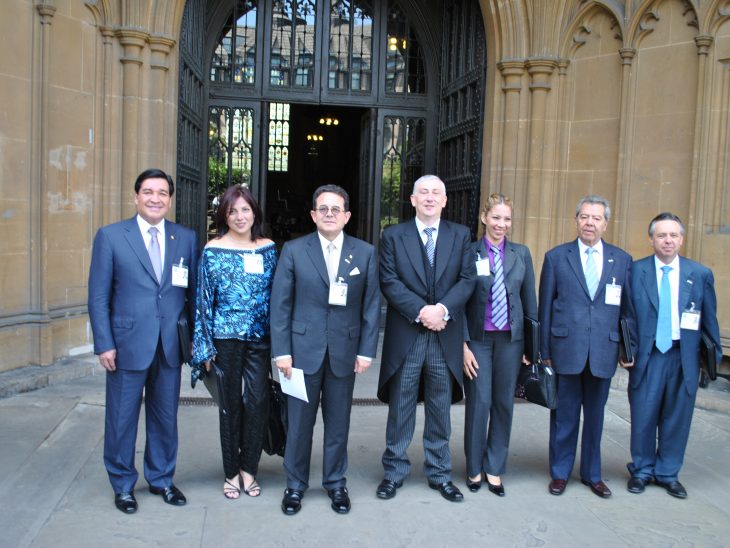 Inter-parliamentary delegation from Mexico visits the Palace of Westminster

The delegation arrived on the afternoon of 10 July and were met at the airport by Dominique Rees and Charlie Holloway of the BGIPU and Miguel Angel Jiménez from the Mexican Embassy. They were taken to the Mint Hotel in Westminster and were at leisure for the rest of the day.

Monday morning began with a welcome to Parliament by Lindsay Hoyle MP, Deputy Speaker of the House of Commons. The delegation met Mark Hutton, then Clerk of the Overseas Office, House of Commons, who gave a presentation on parliamentary procedures. The delegation asked many questions on issues such as the recent referendum on the electoral system and the forthcoming election of a new Lord Speaker.

The morning ended with a meeting with Richard Ottaway MP, Chair of the Foreign Affairs Select Committee, who was joined by Mike Gapes MP. The discussion focused on trade – with Mr Ottaway stating that Brazil and Mexico offered the best opportunities for trade with Latin America. Human rights was also discussed – the FAC was about to publish a report on human rights and appreciated Mexico’s efforts in this area. Another topic was the war against drugs – the delegation stated they had begun a big campaign against drug trafficking and organised crime but thought they did not have the full support of their neighbours in the north.

The delegation attended a working lunch at Shepherds Restaurant, themed on climate change. Viscount Montgomery of Alamein hosted the event which was well attended by his parliamentary colleagues and experts in the field.

After lunch, the delegation were taken to the Foreign and Commonwealth Office where they met Angus Lapsley, Director of the Americas Directorate. The delegation then returned to Parliament where they met representatives of Globe International. The meeting was attended by Lord Jay, Lord Hunt and Barry Gardiner MP as well as the Secretary General Adam Matthews.

Mr Matthews described the role of Globe in examining legislation across 16 of the G20 countries and explained that they were then able to chart at what stage legislation on climate change is at in each of those countries. He explained that the Secretariat of Globe is in Mexico and praised the excellent support they were receiving from the four staff based in Globe Mexico.

The programme ended that day with a return to Parliament and a well attended official welcoming reception in the IPU Room, hosted by Robert Walter MP, Chairman of the BGIPU.

Tuesday morning began with a tour of the Palace led by Lord Dubs.This was followed by a meeting with Heather Wood from the Office of the Parliamentary Commissioner for Standards who described the role of the Commissioner, the Register of Members interests and the complaints procedure.

Following this meeting, the delegation enjoyed a quick trip on the London Eye before heading back to Westminster for the parliamentary lunch in Peers’ Dining Room hosted by Baroness Hooper.

The last meeting that afternoon was with Karen Donegan, Senior Country Manager at UKTI who outlined the role of UKTI and explained that the dedicated team based in Mexico was working in wide range of fields such as infrastructure, education and health. The day ended with a lively reception at the Mexican Embassy hosted by HE Mr Eduardo Medina Mora.

Following this, Jeremy Browne MP, Minister of State in the Foreign and Commonwealth Office joined the delegation in the IPU room for a short meeting. The Minister began by stating that he recognised Mexico’s increasing importance to the UK, that both countries were in agreement on a wide range of issues and that he looked forward to working closely with Mexico during its G20 Chairmanship. He thanked the Mexican delegation again for the warm reception that he had received during his trip to Mexico with the DPM in March 2011. The Minister recognised that significant potential existed to increase trade and investment between both countries and that this was now one of HMG’s top priorities.

Following this the delegation were invited into the distinguished Strangers’ Gallery to observe Prime Minister’s Question time.

Lunch day was themed on human rights and was hosted by Lord Brennan. There was a lively discussion over lunch with other Members and Peers and invited guests from the Bar Human Rights Committee, Peace Brigade International, the Consortium for Street Children and Garden Courts Chambers.

After lunch, the Deputy Speaker of the Senate and the Speaker of the Chamber of Deputies met the Rt Hon Baroness Hayman, The Lord Speaker. The discussion ranged from the debate on Lords’ reform to the phone hacking scandal and the news, which arrived during the meeting, that Newscorp had withdrawn its bid for BSkyB.

Following this meeting the delegation regrouped and spent 15 minutes observing the House of Lords in session.

The last meeting of the afternoon was again just for the Speaker of the Chamber of Deputies and the Deputy Speaker of the Senate who met the Rt Hon John Bercow MP, the Speaker of the House of Commons. Mr Speaker welcomed the delegates and began by commenting that the two countries had a lot in common, particularly in promoting democratic norms and human rights; Trade relations were strong but needed to increase; and he was pleased that both countries had a busy agenda on Climate Change, G20 and the Doha Development Round.

After a brief return to the hotel, the delegation departed for Canning House where they first met the newly-installed Mexican Chamber of Commerce and then enjoyed a reception with Canning House Members.

On Thursday, the programme concentrated on a constituency visit to Islington with Jeremy Corbyn MP. The visit began with a meeting at City University where they learnt that the University had students from 156 countries including 10 from Mexico. The delegation was also very interested to learn about the WC2 University Network project that City was creating – a network of top universities located at the heart of major cities which could collaborate in specific specialisms (business, global health, transport etc). The delegation was delighted to learn that the Universidad Autonoma Metropolitana in Mexico City was a part of this network.

The delegation moved to the Ecology Centre where they were greeted by Jeremy Corbyn MP and given a tour of the facility; a nature reserve in the heart of inner city London which boasts 244 plant species, 94 bird species and 24 types of butterfly.

Lunch in the constituency was hosted by Jeremy Corbyn MP who was also joined by the Mayor, Phil Kelly, and local councillor, Richard Watts.
The programme ended on Thursday afternoon and the delegation returned to Mexico on Friday. 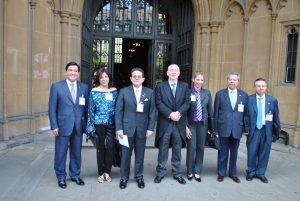 Inter-parliamentary delegation from Mexico visits the Palace of Westminster