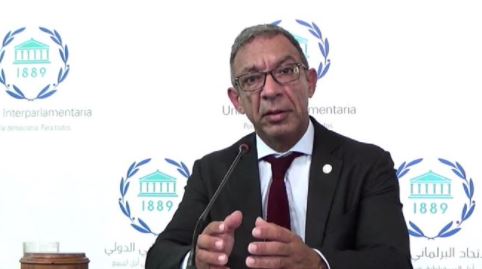 IPU President Duarte Pacheco chaired the meeting of over 1000 parliamentarians and experts from 135 countries connected this week to the concluding sessions of the 142nd IPU Assembly, held online for the first time.

Over 1000 parliamentarians and experts from 135 countries connected this week to the concluding sessions of the 142nd IPU Assembly, held online for the first time. Over 37 per cent of registered MPs were women and some 25 per cent were young MPs, testimony to the importance attached by the IPU to gender equality and youth participation.

Under the umbrella theme of Overcoming the pandemic today and building a better tomorrow: the role of parliaments, MPs identified what parliamentary strategies were necessary to save lives by speeding up the equitable distribution of vaccinations and to rebuild more sustainable and inclusive economies.

IPU President, Mr. Duarte Pacheco, said: “We must seize the momentum created by this unique IPU Assembly to ensure parliaments contribute to rethinking the foundations of the pre-pandemic world and pave the way for a post-pandemic world that is equitable, green and fair. A reinvigoration of our global multilateral system is one way to do this, but we must also continue to build strong and democratic national parliaments that deliver for the people.”

IPU Secretary General, Mr. Martin Chungong, said: “Despite the lockdowns and restrictions on international travel over the past year, the IPU has remained open for business by finding new ways, including digital transformation, to continue providing a platform for parliamentarians from all over the world to interact, albeit virtually. This virtual Assembly reasserts the IPU’s role as the premier global body for parliamentary dialogue.”

In the President’s Summary, encapsulating the deliberations of some 30 virtual meetings over the past few weeks, IPU Member Parliaments called for a stronger response to end the pandemic as well as actions to advance peace, sustainable development, gender equality, youth empowerment, democracy and human rights.

Many MPs reiterated what actions were needed in testimonial videos and written statements.

Keynote speakers included Ms. Helen Clark, former Prime Minister of New Zealand, now Co-Chair of the Independent Panel for Pandemic Preparedness and Response and Board Chair of the Partnership for Maternal, Newborn and Child Health; Ms. Anuradha Gupta, Deputy CEO of Gavi, the Global Alliance for Vaccines and Immunization; and Dr. Jomo Sundaram, former chief economist at the United Nations and prominent academic at Columbia University and the International Islamic University in Malaysia.

Member Parliaments also adopted two resolutions to strengthen peace against threats of conflicts brought about by climate change, as well as on mainstreaming digitalization and the circular economy to achieve the Sustainable Development Goals. Both resolutions are designed to be blueprints for parliamentary action at the national level. 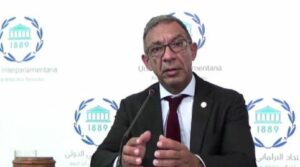 IPU President Duarte Pacheco chaired the meeting of over 1000 parliamentarians and experts from 135 countries connected this week to the concluding sessions of the 142nd IPU Assembly, held online for the first time.