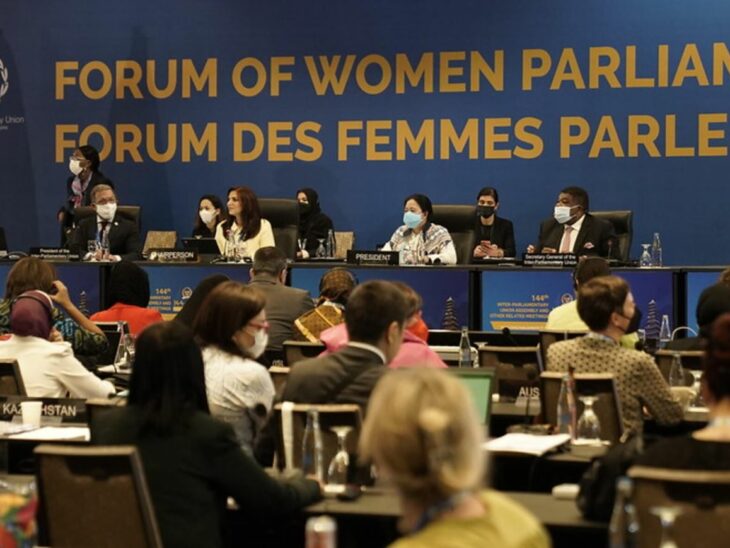 The IPU Forum of Women MPs at the 144th IPU Assembly in Indonesia.

As Liz Truss becomes the UK’s next PM, here’s how women parliamentarians can gain ground in politics.

Succeeding in politics is tough – succeeding as a woman is even harder. Millions of women around the world face discrimination, sexism and violence, with women parliamentarians being no exception.

Liz Truss’s appointment as the United Kingdom’s Prime Minister was the third occasion a woman has become head of government and follows Margaret Thatcher’s 11-year stint in the role and Theresa May’s three years.

Women, however, were gaining ground in politics internationally much earlier than one might assume. The first female parliamentarians came from Finland, with the election of 19 women to the Eduskunta in 1907.

While the number of women members of parliament worldwide has grown to 26.4% according to the IPU’s latest figures, there is still much work to be done. At the current rate of progress, gender parity in national legislative bodies will not be achieved before 2063.

Ms. Truss’s victory represents yet another stepping stone for increased female representation at the highest political level. Below, we break down the five ways women can make the future of politics and parliaments more female.

Balanced political participation and power-sharing between women and men in governmental decision-making is the internationally agreed target set by the Beijing Declaration in 2015. However, most countries have yet to achieve gender parity.

According to the IPU’s 2021 Women in parliament report, implementing ambitious and well-designed quotas for the number of women parliamentarians is one of the most critical success factors in augmenting women’s representation in politics.

However, quotas alone may not increase women’s representation, and therefore clear, well-structured and well-drafted regulations with effective enforcement mechanisms must be implemented.

2. End violence against women in politics

Physical, sexual and psychological violence against women is among the most widespread human rights violations today. According to the IPU’s landmark 2016 report, nearly 82% of 55 women parliamentarians surveyed from 39 countries reported first-hand experience of psychological gender-based violence during their political careers, while 44% of the women surveyed stated that they had been physically threatened during their time in office.

Online and offline hate speech, sexist comments, sexual harassment and physical assault are also widespread, and are regularly used as tactics to dominate and silence women in politics. These need to be tackled by establishing cross-party, mixed-gender working groups in parliaments across the globe to eliminate gender-based violence; develop standards and policies to combat sexism and harassment; and establish an independent, confidential and fair complaints system that those working in parliament can trust.

The fear of ‘big politics’ is real for many women around the world, and factors such as self-doubt, stereotypes and personal reservations often prevent even the most politically gifted women from entering government. A 2021 UNDP study found that tutorship programmes, including those developed by political parties, help to connect women with more experienced female politicians and gain the necessary experience by learning from their insight. Women parliamentarians – who are often newcomers – can also benefit from mentorship, by helping them become leaders and progress in their careers.

The impact of the media on the status of women – including those serving as MPs – has long been a concern, as gender-based stereotypes are perpetuated on television, on the Internet and in print to this day.

A 2020 Journal of Communication study found that women are still stereotypically disassociated from public life and politics, and the association of women with physical appearance, nurturing and private life leads to media coverage focusing more on a woman parliamentarian’s personal background, clothing, marital status and children – or lack thereof.

Media personnel at all levels – from reporter to editor – should be aware that, while certain stories “sell”, they do so at the expense of perpetuating gender patterns that run counter to efforts to strengthen democracy.

Educating journalists, calling attention to bias and creating projects that monitor press treatment of women politicians, parliamentarians and presidential candidates – and document sexist coverage – are all effective ways to increase women’s representation in the media.

Women’s parliamentary caucuses – pursued even in the most politically combative environments – allow women parliamentarians to work collaboratively across party lines to foster gender equality legislation and policy agendas. They can help amplify women’s voices and influence in parliament, where they are often in a numerical minority. However, due to a lack of support, resources and sometimes power, women lack a feeling of the empowerment and recognition needed to promote legal reform. It is therefore imperative that additional efforts, organizational support and leadership are provided for caucuses to succeed.

The IPU’s Forum of Women Parliamentarians is an example of a women’s caucus, set up in 1978, which has since developed into a formal governance body with the power to influence IPU policy, working methods and decisions. The Forum meets at every IPU Assembly. Some 200 MPs attend, including some male MPs, showing that gender parity is a shared responsibility between men and women. The Forum will meet soon in Kigali, Rwanda at the 145th IPU Assembly. 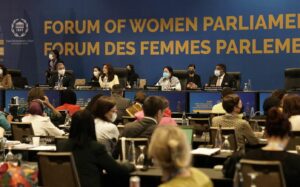 The IPU Forum of Women MPs at the 144th IPU Assembly in Indonesia.