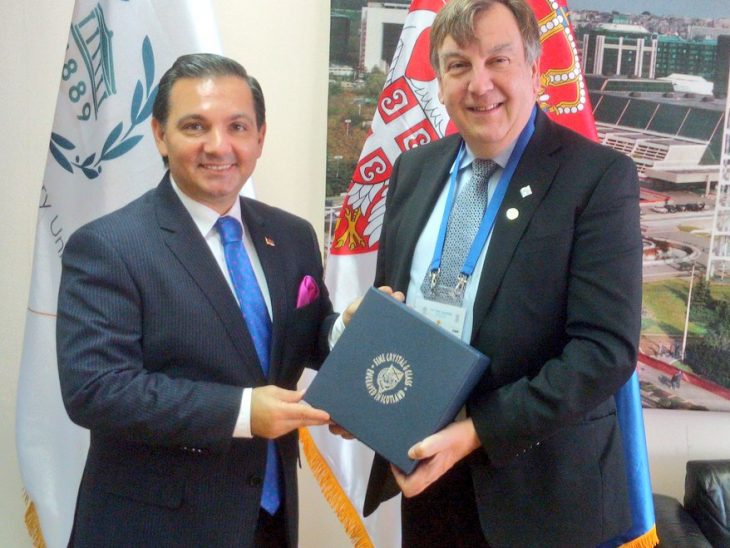 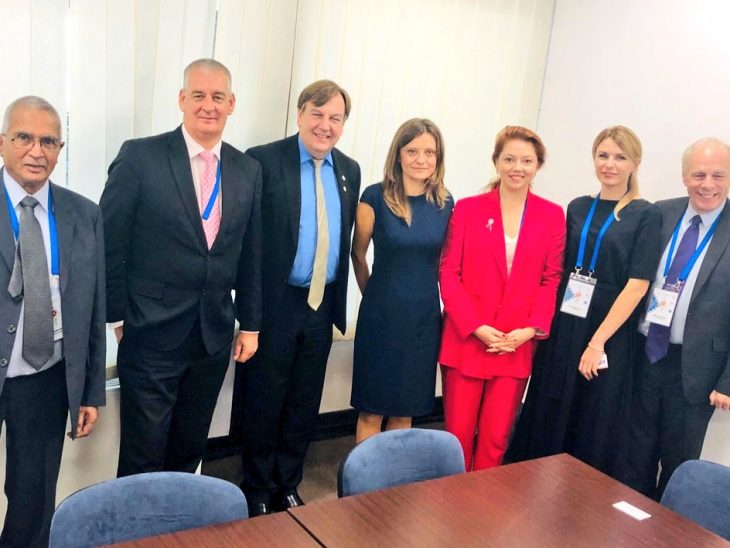 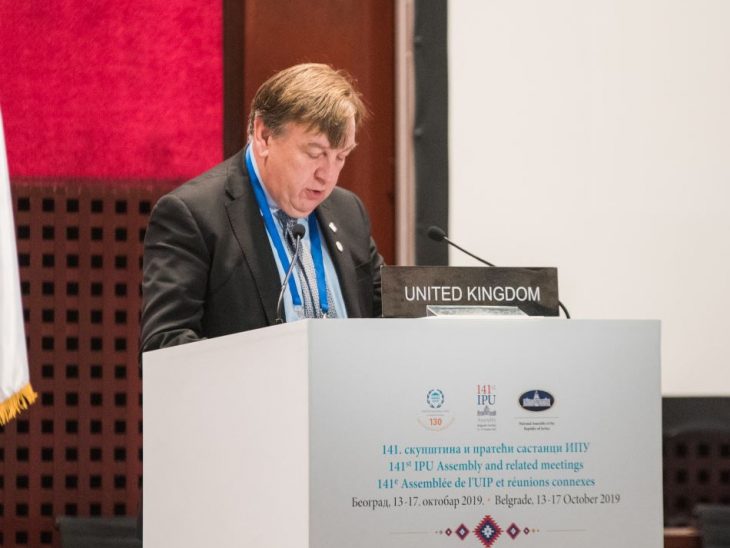 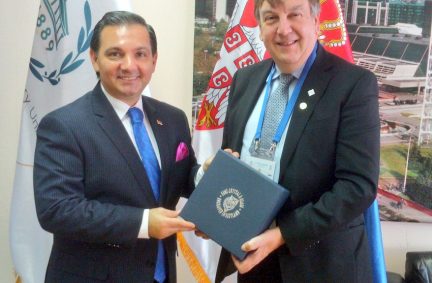 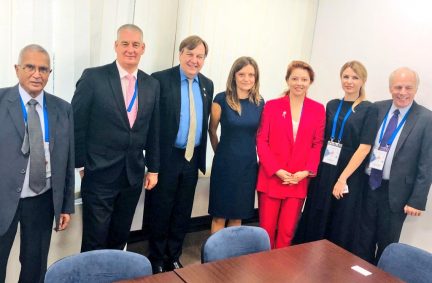 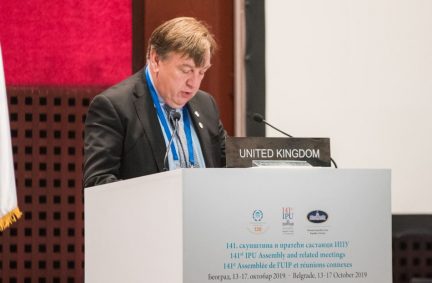 A landmark resolution calling for parliaments to take all legal and policy measures to achieve universal health coverage (UHC) by 2030 has been adopted by the world’s parliaments gathered in Serbia for the 141st IPU Assembly. The resolution urges parliaments to put in place effective UHC legislation to ensure that the right to public health and medical care is guaranteed for all in law and in practice, without discrimination.

Over 1,800 parliamentarians and UN and civil society partners from around the world met in Belgrade from 13 to 17 October. The resolution was adopted at the closing plenary Assembly session. The resolution is designed to accelerate progress towards universal health coverage for up to 5 billion people who are projected to lack access to essential health services by 2030. It follows the Political Declaration adopted at the seventy-fourth session of the United Nations General Assembly High-Level Meeting on universal health coverage in September.

Gabriela Cuevas Barron, IPU President, said: “This landmark IPU parliamentary resolution has the potential to have a real impact on people’s lives – if we want it to. It’s a question of political will. As parliamentarians, we have a duty to the people we represent to make their lives better by making universal health coverage a reality, especially for women, children and adolescents. This is one of the main priorities of the IPU- to translate international agreements into national realities for our countries and people.”

Martin Chungong, IPU Secretary General said: “The world has 11 years left to make good on its commitment to the 2030 global development agenda. This timely IPU resolution is a roadmap for parliamentarians to help them put in place the necessary legislation and resources for universal health coverage and to make sure their governments are fulfilling their promises.”

“There is now unprecedented momentum and political commitment behind the conviction that health is a human right to be enjoyed by all people, not a privilege for the few,” said Dr Tedros Adhanom Ghebreyesus, Director-General of the World Health Organization who was in Belgrade for the occasion. “Building on the political declaration on universal health coverage approved at the United Nations General Assembly, this milestone IPU resolution is the vital next step in translating that commitment into concrete laws and resources to make UHC a reality in the lives of people all over the world.”

The resolution calls on parliaments to use all their power to hold their respective national governments accountable for the effective implementation of UHC commitments, to monitor the impact of UHC policies and programmes, and to establish parliamentary mechanisms to measure progress on achieving access to health care for all by 2030.

The IPU Forum of Women Parliamentarians meeting at the Assembly also looked at ways to ensure universal health coverage addresses the needs of women and girls and to remove the barriers that prevent them from accessing health-care services as well as helping to reinforce the gender component of the resolution.

Parliamentarians at the Assembly also adopted the Belgrade Declaration, Strengthening international law: Parliamentary roles and mechanisms, and the contribution of regional cooperation. In the Declaration, IPU Member Parliaments underlined the importance of a peaceful world order based on the rule of law.

They expressed their support for strong and effective multilateral institutions, with the United Nations at their core, designed to find solutions to common challenges and settle disputes between States.

They also pledged their commitment to regional cooperation as a means to enhance the international legal order and work towards the full implementation of shared international commitments.

One of those commitments – the Convention on the Rights of the Child – was the focus of a special 30th anniversary event organized in partnership with UNICEF in the presence of its regional ambassador, Goran Bregović.

In their declaration to mark the Convention’s anniversary, IPU Member Parliaments recognized that, in the 30 years since its adoption, the lives of millions of children had been improved through its implementation. However, with new challenges facing children in the twenty-first century, parliamentarians reaffirmed their commitment to upholding and protecting the rights and guiding principles enshrined in the Convention.

Youth empowerment was the theme of a special celebration of the 2019 Future Policy Award, the so-called “Oscars” for the best policies that advance youth access to decent jobs, including green jobs, and enhance civic and political participation for sustainable development and peace.

The IPU Committee on the Human Rights of Parliamentarians met during the Assembly to consider the cases of over 300 MPs who are in danger.

At the Assembly, the IPU signed agreements with the National Council of Austria, which will host the Fifth World Conference of Speakers of Parliament in Vienna in August 2020, and with the Chamber of Deputies of Rwanda, the future hosts of the IPU’s 143rd Assembly in October 2020.

The IPU also signed an agreement with the Parliamentary Assembly of La Francophonie, whose status was upgraded to Associate Member of the IPU.

See below the speech by the BGIPU Chair marking the 130th Anniversary of the IPU:

See below the General Debate Speech of the BGIPU Chair at the 141st Assembly:

The UK Delegation to the 141st IPU Assembly was led by BGIPU Chair, Rt Hon John Whittingdale MP, and comprised Vice-Chairs, Baroness Hooper and Ian Liddell-Grainger MP, Nigel Evans MP, Rt Hon Lord Dholakia, Baroness Scott, Dr Lisa Cameron MP and Graham Jones MP.  In addition to many informal exchanges in the margins of the Assembly, the UK delegation had formal bilateral meetings with the host country, Serbia, as well as Argentina, Japan, Brazil, Indonesia, Ukraine, China, Yemen, Venezuela, Spain, Ethiopia, Syria, Pakistan and a quadrilateral exchange with the delegations of Australia, Canada and New Zealand.  We also had extensive discussions with many European counterparts in the context of 12 Plus Group meetings against the backdrop of continuing BREXIT developments. 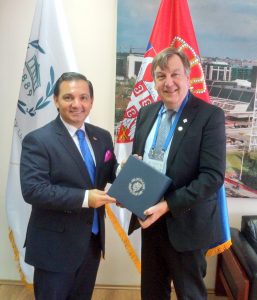 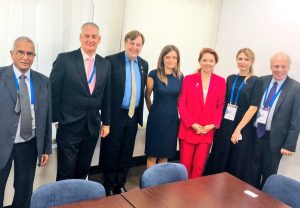 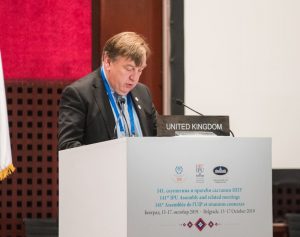