Many common interests between UK and Danish counterparts discussed 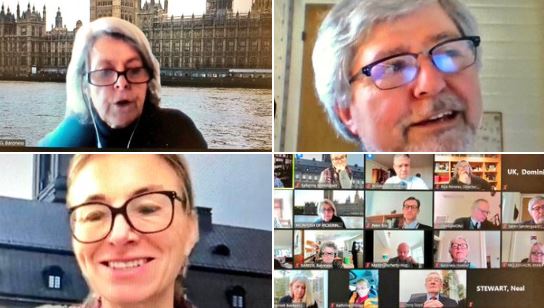 On 11 March, BGIPU held a bilateral meeting between UK and Danish Parliamentarians led by Co-Chair of the Denmark APPG Baroness McIntosh of Pickering.

On 11 March, BGIPU held a bilateral meeting between UK and Danish Parliamentarians. The discussion was led by Co-Chair of the Denmark APPG Baroness McIntosh of Pickering, and she was joined by fellow APPG members Andrew Rosindell MP, Lord Mountevans and Viscount Craigavon.  Also in attendance was the BGIPU Chair Harriett Baldwin MP, plus Dr Philippa Whitford MP, Tony Lloyd MP, Anne McLaughlin MP, Martin Docherty-Hughes MP, Baroness Hooper and Baroness Barker. On the Danish Side were the Chair of the Denmark IPU Group Soren Sondergaard, accompanied by Kathrine Olldag and Katarina Ammitzboll.

Baroness McIntosh started by noting she was half Danish so was very pleased to be chairing this meeting.  On the first topic of bilateral cooperation against the backdrop of the global pandemic and Brexit, Mr Sondergaard, noted there had been very strong concern that a vaccine resistant strain of COVID-19 might be a serious risk of spreading after an outbreak in Danish mink, resulting in a decision to cull them all but farmers had been compensated. That outbreak aside, the Danish economy was recovering strongly as the pandemic eased and the Government. Like others including the UK, had given support to small businesses and supported wages. There was also discussion around obstacles experienced in the fishing industry following new Brexit-related customs barriers with some SNP members raising concerns over impediments to exporting fish and shellfish to the EU.  The Danish side noted, some of their fisherman were also no longer able to fish in UK waters and were being compensated by the Government.

There was a very good exchange on global Human Rights issues with and the importance of the IPU’s Committee on the Human Rights of Parliamentarians was highlighted.  Danish members said this must be key priority for the IPU and the BGIPU Chair agreed saying she had also commended a report of the Committee to the UK Foreign Secretary. Andrew Rosindell noted both Denmark and the UK shared common interests in overseas territories and the importance of respect for democracy in how they were administered and managed.

On climate change, Baroness McIntosh noted that COP26 was a good opportunity to demonstrate concerted UK action on climate change to the entire world and it was clearly time for great urgency.  The EU would have a key role to play working very closely with developing world nations to advance ambitions at COP26.  Ms Ammitzboll highlighted the Danish initiative of Energy island and how it would advance green energy for a significant part of northern Europe over the next decade. She also noted Denmark was working to implement a carbon dividend tax, which had not yet succeeded in any European country, but there was hope Denmark could set the standard.  Members on both sides discussed “building back better” the green economy in a post-COVID world, and how technology can be shared and progressed to enable nations to use it for good in the fight against climate change. Members noted Denmark had a goal of achieving 70% reduction of carbon emissions by 2030 and there was a commitment to talk further in the lead-up to COP26.

Both sides agreed the importance of seeing the US Congress re-join the IPU, and the BGIPU Chair confirmed that she had written to the US Congressional leadership in support of this objective and looked forward to a positive outcome on these collective efforts. 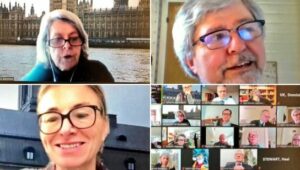 On 11 March, BGIPU held a bilateral meeting between UK and Danish Parliamentarians led by Co-Chair of the Denmark APPG Baroness McIntosh of Pickering.