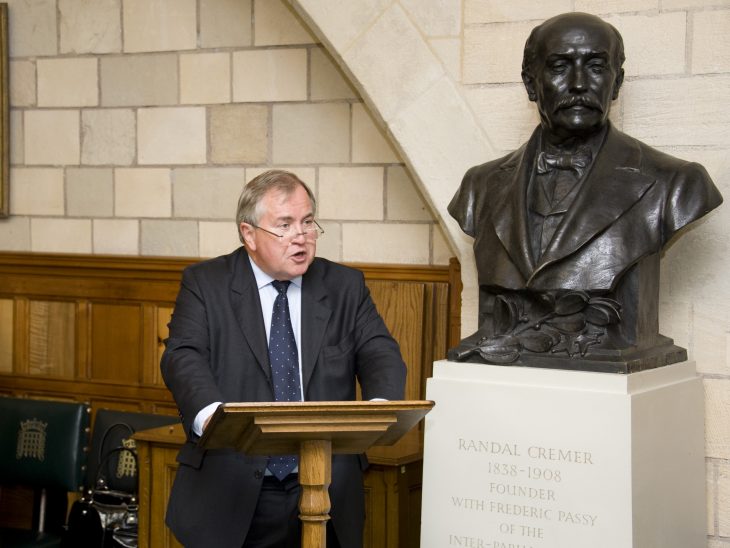 The Chair of the BGIPU, Robert Walter MP, gave a statement to mark the Day at a reception for Diplomatic staff and parliamentarians on 11 September.

The international Day of Democracy 2012 was marked by statements and events from world leaders and politicians across the world and the BGIPU also held a series of events in Westminster to mark the occasion as part of BGIPU week in Parliament.

The Chair of the BGIPU, Robert Walter MP, gave a statement to mark the Day at a reception for Diplomatic staff and parliamentarians on 11 September, as follows below;

“As you may be aware, the UN General Assembly proclaimed 15 September as the International Day of Democracy in 2007, inviting Member States, the United Nations System and other regional, intergovernmental and non-governmental organizations to commemorate the Day. The event is intended to provide an opportunity to review the state of democracy in the world and for each country to reflect individually on its own democratic institutions and principles as transacted in its own unique political context.

As often said, democracy is as much a process as a goal, and it is only with the full participation and support of the broader international community, national governments, civil society and individuals that the ideal of democracy can be made a reality to be enjoyed by every individual, regardless of race, creed or gender, in every corner of the world. Underscoring this, the theme for the International day of Democracy in 2012 is: “Dialogue and Inclusiveness: Central to Democracy”.

So a fundamental question for that dialogue each year should be “What is the state of democracy in the world?” The Economist Intelligence Unit (EIU) Democracy Index for 2011 showed that democracy has been under intense pressure in many parts of the world. In most regions the average democracy score for 2011 is lower than in 2010, including the developed countries of North America and Western Europe. There was a decline in the average score for Eastern Europe and small declines for both Asia and Latin America. These were offset by increase in average scores in the Middle East and North Africa (MENA) and Sub-Saharan Africa.

The Democracy Index for 2011 highlights the impact of the Arab Spring and the greater effects it might have, as well as the impact of the global financial crisis in 2008–09 on politics throughout most of Europe. The Democracy Index score was lower in 2011 than in 2010 in 48 countries out of the 167 that are covered. It was higher in 41 ranked countries, and it stayed the same in 78. In assessing the results overall, the EIU concluded that for 2011, at least, democracy was “under stress”.

The importance of consolidating and defending democracy is highlighted no more significantly than today, September 11, when we are reminded too readily of the threat posed by those who reject democratic principles to advance their views through violence and terror against innocent civilians or who seek to rule by dictatorial force or harm their own people.

Recalling our long struggle to consolidate democracy worldwide, in 1903, Sir Randal Cremer MP was named the first British recipient of the Nobel Peace Prize for his role as ‘first father’ of the Inter-Parliamentary Union (IPU), established earlier in 1889. Parallel to that, he also effectively established the British Group of the IPU; a body I am now proud to Chair. Sir Randal’s legacy continues to guide the work of the IPU as a leading body in consolidating democracy in its role as the world organization of parliaments. The IPU promotes democracy, in particular by strengthening the institution of parliament, recognising that while a parliament does not guarantee democracy, there can be no democracy without a parliament.

The Inter-Parliamentary Union adopted a Universal Declaration on Democracy in September 1997 affirming the principles of democracy, the elements and exercise of democratic government, and the international scope of democracy. In work in which our own BGIPU Vice-Chair, the Rt Hon Ann Clwyd MP, has played a lead role, in 1976 the IPU founded its Committee on the Human Rights of Parliamentarians, which investigates violations of these rights to ensure members are able to represent their constituents freely and safely in national legislatures throughout the world. This work will be the feature of policy seminar I will chair for parliamentarians to be held here in the IPU Room on 12 September as part of BGIPU Week (For the report and videos of this event please see here).

In addition, the IPU encourages parliamentary involvement in international relations and promotes parliamentary diplomacy through its twice-yearly Assemblies, at which parliamentarians from around the world meet to exchange views and take positions on issues of immediate global concern. I will have the honour to lead the BGIPU’s delegation to Quebec City for the next IPU Assembly in October and this work has important place in allowing the BGIPU to meet its objective to advance the parliamentary dimension of Britain’s foreign relations, a cause which is also the key focus of our gathering tonight.

In closing, may I thank you all as representatives of the diplomatic community here in London and in your capacities as key stakeholders and partners for the BGIPU for joining us, as well as the valuable assistance you provide throughout the year in our work.

Statements to mark the day were also given by UN Secretary General Ban Ki Moon, the President of the IPU, Mr Abdelwahad Radi and by the British Secretary of State for Foreign and Commonwealth Affairs, William Hague MP. 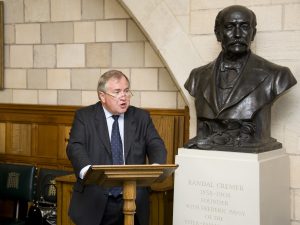 The Chair of the BGIPU, Robert Walter MP, gave a statement to mark the Day at a reception for Diplomatic staff and parliamentarians on 11 September.