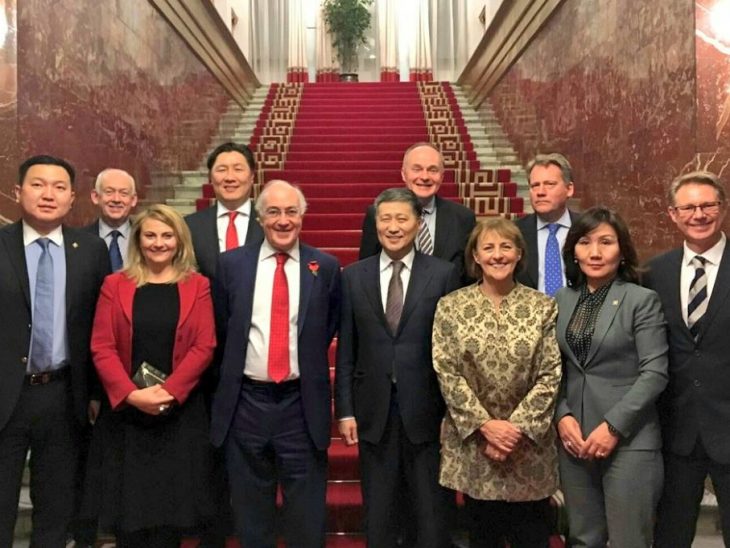 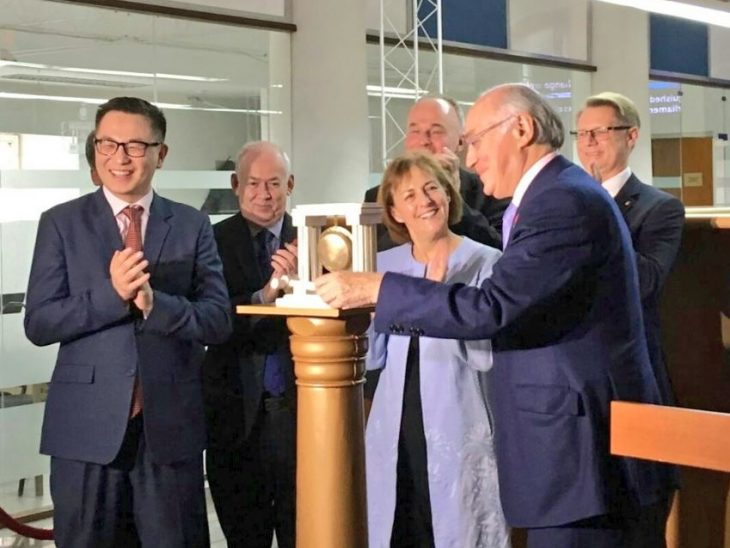 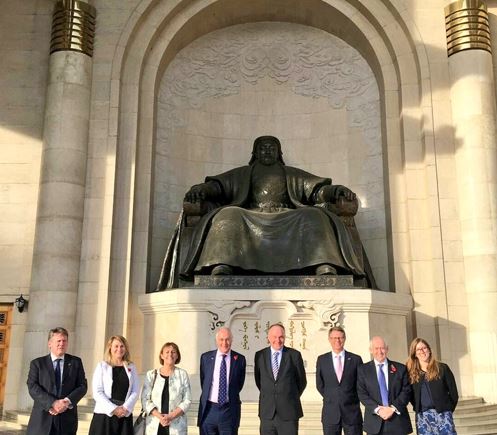 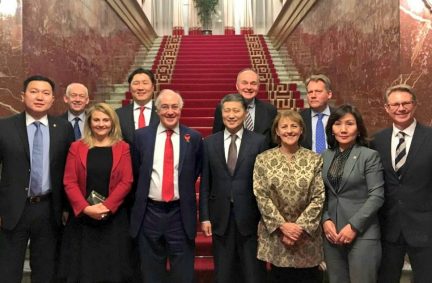 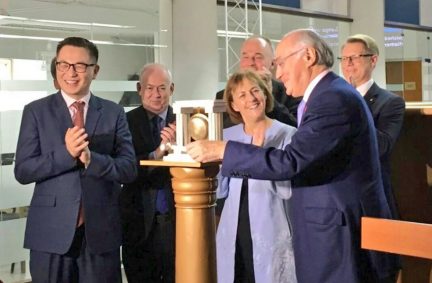 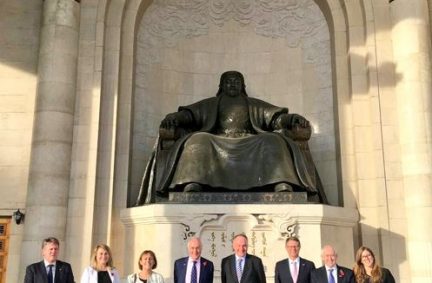 From 3-11 November, I was delighted to lead a BGIPU delegation to Mongolia, alongside Deputy Leader and Mongolia APPG Chair, John Grogan MP (Lab). We were joined by David Morris MP (Cons), Adam Holloway MP (Cons), Wayne David MP (Lab) and Baroness Scott of Needham Market (LibDem). We were accompanied, and very ably assisted by Emily Davies, International Project Manager at BGIPU. This was to be the third BGIPU delegation to Mongolia and was a reciprocal visit following the Mongolian delegation to Westminster in February 2016.

The first day of our formal programme saw us travel South to the Oyu Tolgoi mine, part financed by the Rio Tinto Group. Here we witnessed the copper and gold mining process, from extraction to packaging, and learned of the great mineral potential the country has to offer – with an ore deposit as large as the Island of Manhattan. Oyu Tolgoi operates both an open pit and underground development and since construction in 2010 their in-country spend has exceeded $5 billion US Dollars. We were very grateful to those members of the workforce who met with us, 95% of whom were Mongolian.

Tuesday was spent meeting with H.E. Mr Miyegombo Enkhbold, Chairman of the State Great Hural, where we discussed the long diplomatic relationship between the two countries and the current cooperation on defence, culture and education. Both sides shared their enthusiasm at seeing new parliamentarians involved in developing the ties between Mongolia and the UK, stressing the importance of exchanges and best practice sharing, especially between younger generations of parliamentarians.

A recent report has identified Mongolia as one of only six genuine democracies in Asia, a truly remarkable achievement given the fact that until 1990 it was, effectively, ruled for hundreds of years under the strong influence of either China or the Soviet Union.  A subsequent meeting with the Chairman of the Democratic Party Caucus, Mr D Erdenebat, provided us with an opportunity to learn about the role of the opposition in the Mongolian Parliament and their methods of holding the government to account. With only nine members in opposition, we heard the party’s main focus was working towards the next election in the hope of strengthening their parliamentary presence.

It was a pleasure to meet the Chairman of the Mongolia-Britain Parliamentary Group, Mr S Batbold, and three of his committee colleagues, on Tuesday evening. Discussion focused on educational links between Mongolia and the University of Cambridge, the challenges Mongolian Parliamentarians currently face and the country’s relationship with its neighbours. As well as healthy relations with China and Russia, Mongolia is one of the few countries that has a good relationship with both North and South Korea. We learned of the positive engagement policy Mongolia operates towards North Korea, with an embassy being re-established in Ulaanbaatar in the early 2000’s. We in turn updated the Friendship Group on Brexit negotiations and our outlook for a post-European Union United Kingdom.

Our meeting with Minister of Energy, Mr Davaasuren, on Wednesday morning enabled us to hear the Government’s perspective on the Oyu Tolgoi operations. The minister expressed concerns around the level of income generated that was leaving the country. Energy dependency on Russia and the complications surrounding this were also discussed, as was Russian Federation control of external financing of energy production. With Ulaanbaatar ranked as the fourth most polluted city in the world, greenhouse gasses and their impacts were natural discussion points, with the Minister affirming that tackling air pollution was a critical issue for his Ministry.

Later we met the Minister of Defence, Mr N. Enkhbold MP, where we had an opportunity to express our gratitude to the Mongolian Armed Forces, who have been working with the UK since 2005 on joint peacekeeping missions. We discussed how the bilateral defence relationship could be further developed in the fields of military engineering, military hospitals and the procurement of smaller equipment for Mongolian Troops. We were able to further discuss some of these issues over lunch with the Minister for Foreign Affairs, Mr D Tsogtbaatar. Conversation there also focused on Mongolia’s third neighbour policy, referring to building relationships with countries other than the two major powers between whom Mongolia is sandwiched, and the Minister’s predictions on foreign policy developments in China and Russia.

On Wednesday afternoon we were fortunate enough to have an audience with H.E. Mr Khaltmaa Battulga, President of Mongolia. As a member of the opposition party in Parliament, the President sees his direct election by the people of Mongolia as an advantage in performing his role but did note the constraints that inhibit a small opposition. We heard how H. E. Battulga views the UK as a strategic investment partner and would like to see greater trade between the two countries, with the current trade turnover at $397 million US Dollars. We discussed with him the extent to which goods such as gold, copper and cashmere were exported in their base form instead of finished products providing a higher yield. Corruption and the ways in which it is tackled in the Mongolian political and business systems was also raised, and the President assured us that he had, and would continue to, reiterate in public the need for greater transparency in political and commercial processes.

I had the honour of opening the Mongolian Stock Exchange on Thursday morning, following an interesting meeting with its CEO Mr Kh.Altai where we discussed the relationship between the Mongolian and London Stock Exchanges. The rest of the day was spent meeting with Mr. Randolph S. Koppa, Executive Vice Chair of the Trade and Development Bank of Mongolia, and later with representatives of International Finance Institutions operating in Mongolia. In the latter meeting we were assured that Mongolia supports the Sustainable Development Goals at a political level, but that there have been difficulties in transforming visions into actions.

UK Ambassador to Mongolia, H.E. Catherine Arnold, hosted an excellent reception for the delegation on Thursday evening, which provided us with the opportunity to meet with Mongolian NGO and business representatives, as well as representatives of the British diaspora living in Ulaanbaatar.  For our final morning we attended the British Embassy’s Remembrance Service, a very moving and well attended event, and had a farewell lunch with H.E. Catherine Arnold and Deputy Head of Mission, Mr. Iain Cox, who both looked after us so ably during our visit and to whom we are deeply indebted. 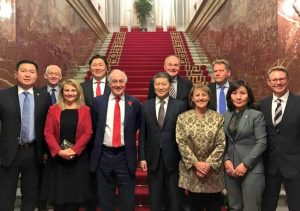 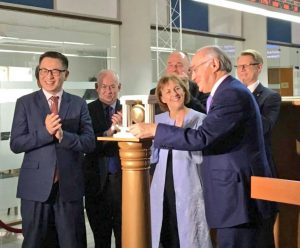 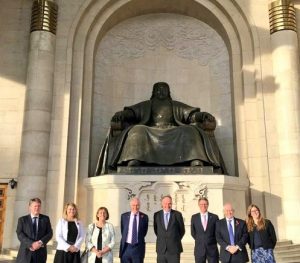