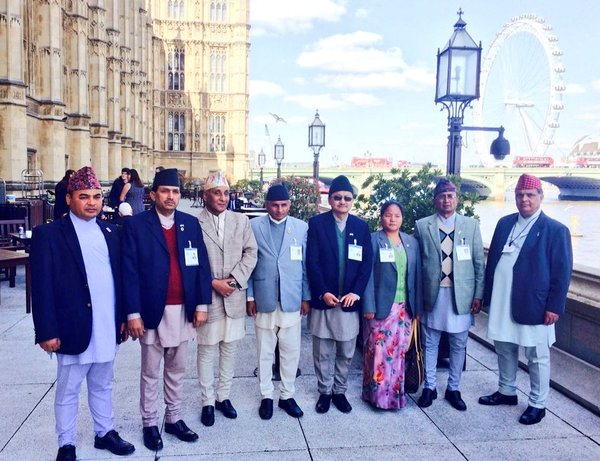 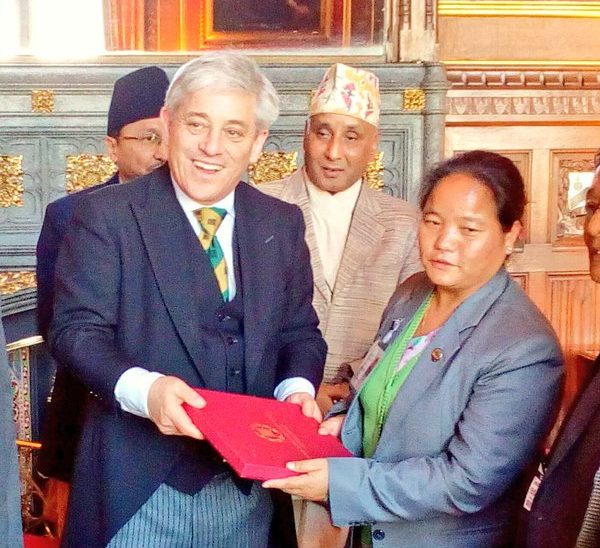 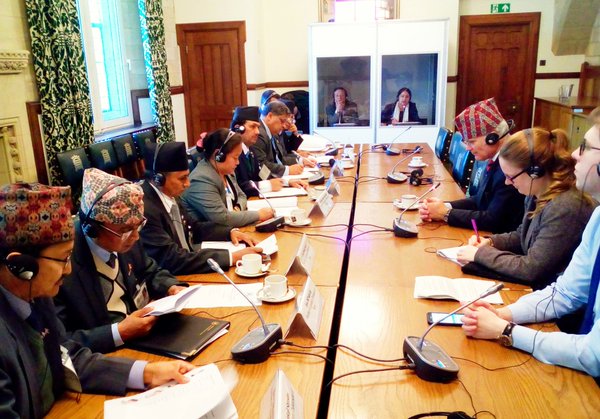 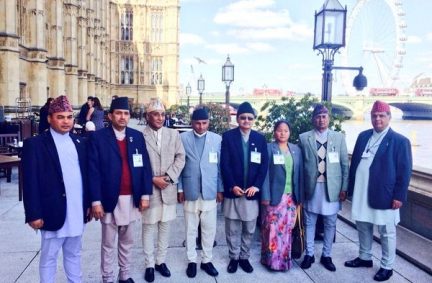 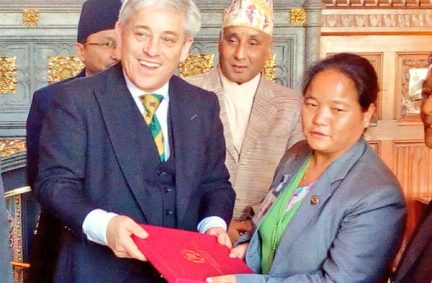 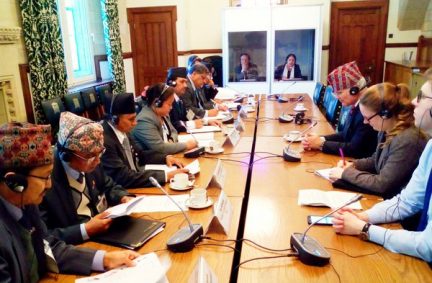 On the first day of their formal programme the delegation were welcomed to Parliament by the Chairman of Ways and Means and Deputy Speaker, Rt. Hon. Lindsay Hoyle MP. Thereafter, the parliamentarians were introduced to the Westminster Parliamentary System by head of the Overseas Office, Mr Crispin Poyser. Following this they met with Rt. Hon. Maria Miller MP, Chair of Women and Equalities Committee and fellow committee member Flick Drummond MP. The meeting touched upon the role of committees and their report mechanism. The Committee Chair highlighted Nepal’s references to LGBT rights in their new constitution and the Speaker noted that it also ensured 33% of parliamentary seats were set aside for women.

Monday’s working lunch was hosted by Virendra Sharma MP, Chair of the All Party Parliamentary Group on Nepal, where post-earthquake disaster relief, aid from the Department for International Development (DfID) and the new Nepalese constitution were all key discussion points. Following lunch the delegation met with Foreign Affairs Committee (FAC) member, Andrew Rosindell MP, to discuss the FAC’s current programme of work, their report on the European Union and the topical migrant crisis. The delegation then had subsequent meetings with Laura Clarke, Head of South Asia Department, Foreign and Commonwealth Office, where the members were provided with an overview of bilateral relations between the two countries, and later Virendra Sharma MP, in his capacity as Chair of the All Party Parliamentary Group on Global Tuberculosis (TB).

In the evening, the delegation attended the welcome reception hosted by Vice Chair of the All Party Parliamentary Group on Nepal and BGIPU Executive Committee Member, Wayne David MP. During the reception, Madam Speaker addressed the long historic relationship between Nepal and UK and also thanked HRH Prince Harry’s visit to Nepal for playing a crucial part in strengthening the two countries’ relationship.

On Tuesday morning the delegation were given a tour of the Palace of Westminster by Fabian Hamilton MP, Shadow Minister for Foreign and Commonwealth Affairs, before making a brief visit to the Churchill War Rooms. The delegates then attended a working lunch hosted by the Lord Speaker, Rt. Hon. Baroness D’Souza CMG, where members from both Parliaments exchanged views on the earthquake and reconstruction plans and relations between Nepal, India and China.

Seema Malhotra MP met with the members after lunch to follow up on discussions held during her recent visit to Nepal and the delegation then moved on to meet with Mr Speaker, Rt Hon John Bercow MP. The two Speakers discussed constitutional issues, developments in Nepal and similarities between their respective parliamentary systems. Madam Speaker queried the effectiveness of PMQs in holding the Prime Minister to account and made a formal invite to Mr Speaker to visit Nepal. The delegation then met with Stephen Twigg MP, Chair of the International Development Committee, and fellow committee members Jeremy Lefroy MP and Fiona Bruce MP. Conversation centred on international aid and ensuring organisations such as the World Bank provided as much to Nepal as they had initially pledged.  Tuesday evening saw the Embassy of Nepal host a reception and dinner in honour of the delegation, with MPs, Peers and members of the Nepalese community also in attendance.

On Wednesday morning, the Parliamentary delegation attended Round Table Discussions hosted by Gareth Thomas MP where conversation concerned the Nepal-UK bilateral relationship, domestic issues in Nepal, regional developments and economic development and trade within the country. Post-discussions, Minister of State, Department for International Development (DfID), Rt. Hon. Desmond Swayne TD MP, greeted the delegation and held focused dialogue on the regeneration of Nepal. He noted that the UK was the second largest aid donor in the world and had ambitions to do more through Government systems to help Nepal recover from the natural disaster.

The delegation observed a lively Prime Minister’s Question Time before attending a Parliamentary Lunch hosted by the Earl of Sandwich. Following this, the members met with the Chair of the All Party Parliamentary Group on Population, Development and Reproductive Health, Baroness Tonge, to discuss maternal health and family planning in Nepal, before departing for Northern Ireland.

On Thursday the delegation spent the day in Belfast with Kingsley Donaldson and John Loughran of The Causeway Institute, where they outlined the Northern Ireland peace process, key political milestones and provided the parliamentarian’s with a tour of the Peace Walls and areas of conflict within the city. The delegation subsequently spent the evening at a reception organised by the Nepalese Association of Northern Ireland, with local diaspora, MPs and councillors.

The parliamentarians visited Stormont on the last day of their programme where they were given an overview of the Northern Ireland Assembly, a briefing on changes in Belfast policing from Chief Superintendent Chris Noble and later lunched with the Speaker, Mitchel McLaughlin. After concluding their time in Belfast, the delegation returned to London on Friday evening and departed for Nepal on Saturday. 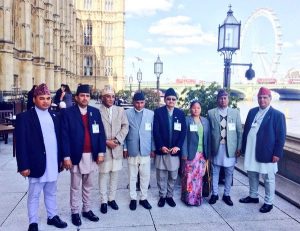 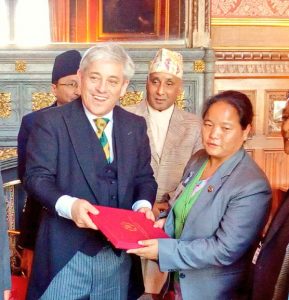 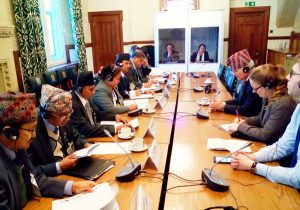