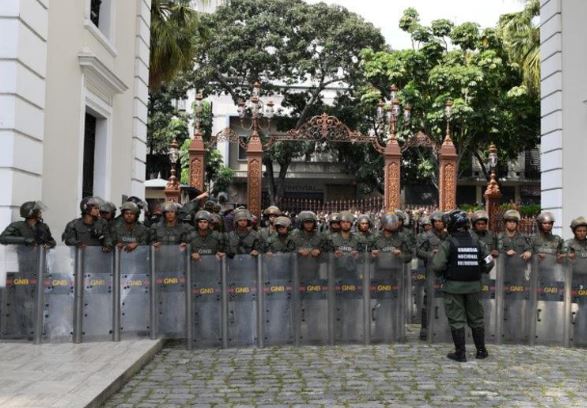 Security Forces in Venezuela have been used to obstruct the work of the legitimate elected body, the National Assembly and harass MPs

The IPU Committee on the Human Rights of Parliamentarians has released new evidence of human rights violations against 509 parliamentarians from 39 countries, a significant increase compared with the 468 cases that were recorded in October 2019. Most of the cases involve governments putting pressure on MPs from opposition parties.

In its latest decisions, the Committee considered new information concerning an assassination attempt against prominent Tanzanian opposition leader Mr. Tundu Lissu in 2017, as well as a surge of new cases of violations against MPs in Venezuela. At its latest session in January, the Committee examined its full caseload of complaints from MPs including from the Democratic Republic of the Congo, Ecuador, and the Philippines.

Mr. Lissu, a former parliamentarian and a vocal critic of the Tanzanian Government, survived an assassination attempt in 2017 despite being shot 16 times.

Mr. Lissu was stripped of his parliamentary mandate in June 2019 largely due to his prolonged absence from the National Assembly while undergoing surgery and medical treatment in Kenya and Belgium. During his well-publicized absence, his parliamentary seat was taken by a ruling party candidate.

Previously, Mr. Lissu had been arrested eight times and charged in court six times for sedition and related offences in connection with public statements critical of the Government.

Since recovering from his injuries and after announcing his intention to return home, Mr. Lissu has again been the target of death threats and intimidation on social media and in the press.

The IPU has asked the Tanzanian authorities to report on any progress made to identify the perpetrators of the assassination attempt as well as the factual and legal basis of repeated arrests and criminal proceedings against Mr Lissu.

The IPU has also suggested that a delegation accompany Mr. Lissu on his return home to meet with the executive, parliamentary and judicial authorities to better understand the human rights situation of opposition parliamentarians in Tanzania.

The IPU Committee also examined the latest developments in Venezuela concerning its biggest caseload of 134 MPs who have complained to the IPU about human rights abuses. Most of the complaints concern alleged threats, intimidation or life-threatening assaults against parliamentarians opposing Mr. Maduro.

At least a dozen MPs were allegedly beaten and injured by security forces on 5 January when they were prevented from reaching the building of the National Assembly for a session on the election of the new parliamentary leadership. Since then, the IPU has been told that MPs cannot freely access the Parliament and effectively perform their functions.

The IPU continues to lobby the Venezuelan authorities to allow a long-proposed mission to take place to work with all sides on finding a solution out of the political impasse.

In January, in cooperation with the Ugandan Parliament, the IPU was able to conduct a fact-finding mission to Uganda to ascertain the facts in the cases of opposition MPs, Mr. Robert Kyagulanyi Ssentamu (aka Bobi Wine), Mr. Francis Zaake, Mr. Kassiano Wadri, Mr. Gerald Karuhanga, and Mr. Paul Mwiru.

Bobi Wine is a young parliamentarian and popular singer, particularly among young people. Through his songs and parliamentary work, he has spoken out publicly and vocally against President Museveni and his Government.

The five MPs, along with other 32 people, were arrested on 13 August 2018 during election campaign rallies. The arrests took place shortly after President Museveni’s convoy had reportedly been pelted with stones. The IPU received credible evidence that several detainees, including the MPs, had been tortured and mistreated whilst in custody.

The IPU calls for effective steps to investigate and prosecute those responsible for the alleged torture and ill-treatment of the MPs, the right to a fair trial in proceedings against them and the insurance that the five parliamentarians can fully exercise their rights to freedom of expression, particularly in the context of the upcoming general elections.

The IPU Committee on the Human Rights of Parliamentarians has a mandate to defend the human rights of persecuted parliamentarians. Its work includes mobilizing the international parliamentary community to support threatened MPs, lobbying closely national authorities, and sending trial observers. The Committee is made up of 10 parliamentarians, representing the major regions of the world, and elected by their peers for a mandate of five years.

Full details of all the decisions taken by the Committee are available here. 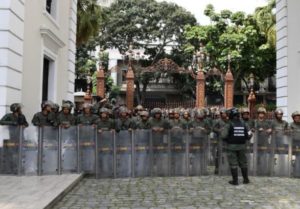 Security Forces in Venezuela have been used to obstruct the work of the legitimate elected body, the National Assembly and harass MPs