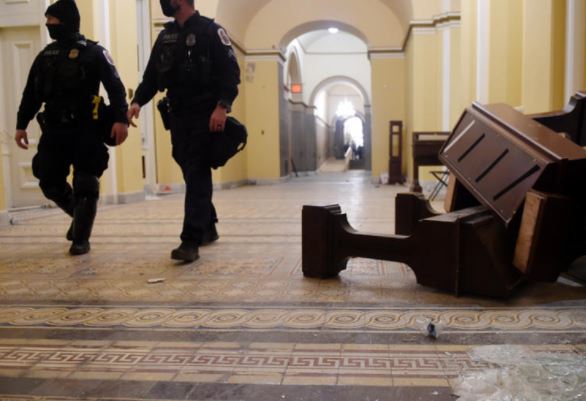 Clearing the damage inside the US Capitol building early on 7 January 2021. OLIVIER DOULIERY / AFP

On 6 January 2021, the world watched in horror as a mob waged an outrageous assault on the US Capitol building. Congress was in session, performing the usually calm and orderly ritual of confirming the election results and certifying the victory of Joe Biden and Kamala Harris. Democracy was under actual, physical danger as parliamentarians took shelter wherever they could, many fearing for their lives.

Disbelief underscored the horror. The peaceful, post-election transfer of power is a linchpin of democratic systems. How could this occur in the United States, a nation many countries have looked to as a shining example of democracy? What did it mean for democratic ideals?

If anything, this affront to democracy exposed its true fragility – it cannot be taken for granted and must be protected and nurtured every day. If this could happen in the US, it could happen anywhere. The grim events in Myanmar serve as a reminder that progress towards building a democratic system can go into reverse.

But it also confirmed democracy’s resilience. Despite the attempt to usurp the electoral will of the people, democracy did not break. Its bedrock institutions and the rule of law prevailed. This resilience was immediately demonstrated when US parliamentarians reconvened a few hours later to perform their constitutional duty of counting electoral votes that confirmed the winners of the November presidential elections.

Democracy is the only system of governance that is self-correcting. The system bowed, but resisted, as proved by the subsequent inauguration and smooth transition of power on January 20. If it had been another system, the result may have been different.

What transpired after the storming of the US Capitol building goes to the heart of IPU’s mission to empower parliaments and parliamentarians to promote peace, democracy and sustainable development. Our slogan is ‘For democracy, for everyone’, and it is helpful to revisit 1997, when IPU Member Parliaments adopted the Universal Declaration of Democracy. The twenty-seven-point affirmation underscores the strength of the democratic system of government as a universally recognized ideal based on common values shared by all people.

The Declaration came about during the Soviet empire’s slow implosion, when some analysts predicted the “end of history”. But new countries emerged from the former Soviet Union and elsewhere, as authoritarian regimes lost their superpower protection and collapsed. These changes often led to newly-formed democracies that better encompassed the desire by peoples for a more effective and equitable form of government.

The IPU empowers parliaments for democracy, and aims to safeguard parliamentarians everywhere, particularly through its unique mechanism to protect and defend them. As the assault on the US Congress showed, being a parliamentarian can be one of the most dangerous jobs in the world. No legislator should fear for their life. No parliamentarian should have to shelter in their office from rioters.

Every year, the IPU witnesses more and more cases of parliamentarians in danger or being abused, usually those that are critical of the governing powers. And every year we see how democracy can triumph against the odds. It is a phoenix, constantly reborn, rising up again. It remains the ideal form of governance – of the people, for the people, and by the people.

The IPU is the only international parliamentary organization which tackles such issues, particularly through the continuous work of its Committee on the Human Rights of Parliamentarians. The Committee calls for action, expresses concern and requests information, helping, at least, to prevent violations against the human rights of parliamentarian from going unnoticed. 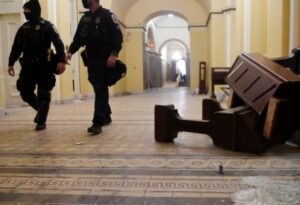 Clearing the damage inside the US Capitol building early on 7 January 2021. OLIVIER DOULIERY / AFP