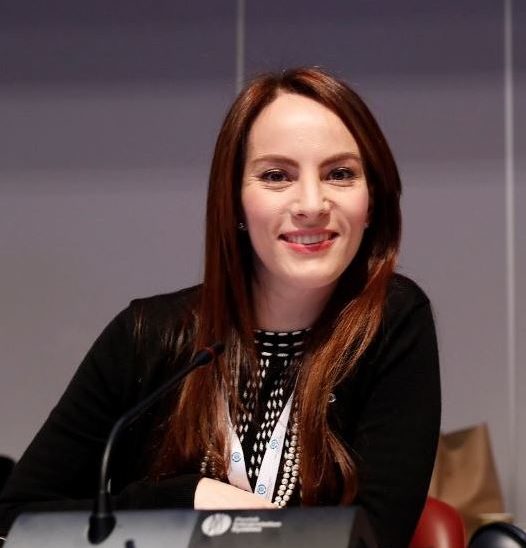 Gabriel Cuevas of Mexico was IPU President from October 2017 to October 2020.

In ending her term as IPU President, Gabriela Cuevas wrote to the IPU’s members in the following terms on 19 October 2020, the final day of her Presidency:

Presiding over the Inter-Parliamentary Union (IPU) is a great honor, but above all, a considerable responsibility. This Organization – with 131 years of history and 179 member countries – is the most important space for parliamentary diplomacy in the world. That is the extent of our responsibility.

Today, in my last day as President, I thank my colleagues for the trust that they placed in me when they elected me three years ago in the 137 IPU Assembly in St. Petersburg, Russia. While working on an intense campaign, I vowed to make the IPU a stronger, more transparent, more democratic, more relevant organization that would also become more closely engaged with its members. These are the goals that guided my Presidency, which now allow me to deliver positive results.

Everyone has been called upon to defend multilateralism, especially the IPU. This is why this has been a priority to me. Humanity endures through difficult times: the Covid-19 pandemic and its grave consequences on both the economy and health, the terrible violence afflicting women and girls, climate change, increasing inequality, and millions who find themselves displaced. Now, more than ever, it should be clear that only through multilateralism can we define joint solutions to our common problems, and that only through parliaments can we provide a road map for national implementation by adapting legislation and allocating budgets. It is us, parliamentarians, who are the ones who must translate global agreements into local solutions.

Therefore, I dedicated a significant part of my Presidency to working directly with parliaments, with the very heart of the IPU. I visited 48 countries; met with 28 heads of state and government, and with more than 90 Speakers of Parliament. I took part in several parliamentary conference, in addition to numerous responsibilities as President of the IPU. Beginning on March this year, this had to change into virtual meetings owing to the restrictions imposed on us by the pandemic. But even though the format changed, the roadmap to reach our goals and attain our results remained the same.

I am convinced that there is a need to intensify our efforts in transparency and accountability. As a result, on 1 November I will present and distribute my activities report encompassing these three years. However, I would like to share with you some of the most relevant results.

Together with the Permanent Mission of Mexico to the UN, we achieved historical progress in two Resolutions on the Interaction between the United Nations, national parliaments and the Inter-Parliamentary Union (2018 and 2020).

In these resolutions we achieved a consensus to commemorate the International Day of Parliamentarism on every 30 June, increase cooperation between the IPU and the UN in matters of importance such as the empowerment of women and girls, the fight against terrorism, and the 2030 Agenda, and we agreed on the convening of periodic meetings between UN high officials and the IPU. In our 2020 Resolution, we entirely reflected our priorities in accordance with the UN and member states: translating global agreements into national solution, achieve greater gender equality (especially in political life), eradicating violence against women and girls, join our efforts against hate speech, and promote participation of young people in parliaments to a much greater extent.

This year, in which we commemorated the 75th Anniversary of the United Nations and 131 years of the IPU, we hosted the Fifth World Conference of Speakers of Parliament and we adopted an important Declaration with a significant parliamentary commitment to building back better. This Declaration has been distributed to all UN members, and it is an essential part of my message in the UN75 Summit on behalf of all parliamentarians in the IPU.

As we agreed in our Declaration, “We underscore that the IPU is a parliamentary political organization which must be endowed with stronger parliamentary leadership, direction and control”. An important part of my work was also focused on strengthening our institution, to make it more democratic by decentralizing decisions so that they can be made by our members and not exclusively by the Presidency and the Secretariat, which is the way this was done three years ago. We also managed to make our organization more transparent by delivering more information to members and taking more decisions to the governing bodies; more closer to its members through hundreds of parliamentary meetings; more inclusive by giving a greater voice to women through ensuring that all new working groups be elected under gender parity rules; and also ensuring that young people are always represented. Finally, the IPU also became more relevant by taking its presence to over 48 countries and more than 30 UN conferences.

Austerity is a fundamental principle and a fair demand from citizens. As President of the IPU, I managed to engage in more activities with national parliaments without using more resources. More was achieved by a better use of the budget. I thank the IPU Secretariat for the support in the development of our Strategy and the execution of the work programme, which we defined with the Executive Committee in February 2018 and reflects the promises that I made to members during my campaign.

Moreover, we developed an innovative and dynamic presidency. For the first time, the IPU undertook the Executive Education Parliamentary Leadership Seminar by working jointly with the Instituto Tecnológico de Estudios Superiores Monterrey (ITESM, Mexico); we organized the book to commemorate the IPU’s 130th Anniversary, and we implemented training and preparation webinars for parliamentarians with the Sustainable Development Solutions Network (SDSN) and Parliamentarians for the Global Goals (PfGG). In both cases, as President I sought the financing needed to make these projects a reality. I am grateful to ITESM, to the National Assembly of Kuwait and its President, Mr. Marzouq Al Ghanim, to Mr. Jeffrey Sachs and Ms. Kirsten Brosbøl for their considerable support to achieve this.

As the youngest person and only the second woman to preside the IPU in its history, I am aware that I have a responsibility to open more doors for women and youth. I did so during my mandate and that is how it must continue. We need both an IPU and national parliaments that are examples of gender parity and inclusion of future generations. Only more egalitarian parliaments can build a more inclusive planet.

While I write these lines, the world undergoes simultaneous crises. The pandemic tests our political systems and the means through which we administrate what is public. One of the institutions that must be up to the task to the greatest extent is parliament. The challenge is certainly not an easy one: we need to both rethink and rethink ourselves, defend governments that originate from collective decisions, to know that we are part of a process in which each and every single human being which make up the different nations are respected. In a few words: democracy.
But the close and intense work that I have carried out with my colleagues throughout these three years has left me with full certainty that we can be up to the challenge. In our experiences and deliberations, I had the privilege of witnessing clear examples of an honest commitment for finding people-centered solutions; of an unrelenting will to make the decision of acting in the face of the problems that afflict our world; and of solidarizing from the most profound sense of empathy with the causes of those who need to be heard and helped the most. I am grateful for the 46,552 parliamentarians who work every day to build a better world that is much less unfair and more human. As long as we do not desist from this momentum, humanity will overcome present challenges and will walk towards a prosperous future.

Once more, I thank everyone who made possible this 2017-2020 Presidency and each one of its results. Particularly, I would like to thank the Congress of the Union, the Government of Mexico, and the Mexican Foreign Service for their essential efforts, without which this honor and experience would not have been possible. I remain with the satisfaction of having contributed to an extent to the goal that must guide all of us who are involved in politics: to dignify the life of each and every one that are a part of this world.

With the deepest sincerity and esteem,
Gabriela Cuevas Barron
President of the Inter-Parliamentary Union

A new IPU President will be elected at an extraordinary session of the Governing Council of the IPU to be held in virtual format from 1-4 November 2020. 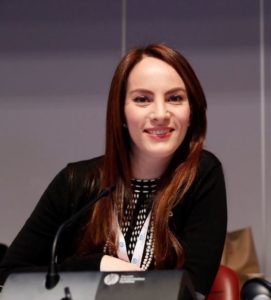 Gabriel Cuevas of Mexico was IPU President from October 2017 to October 2020.