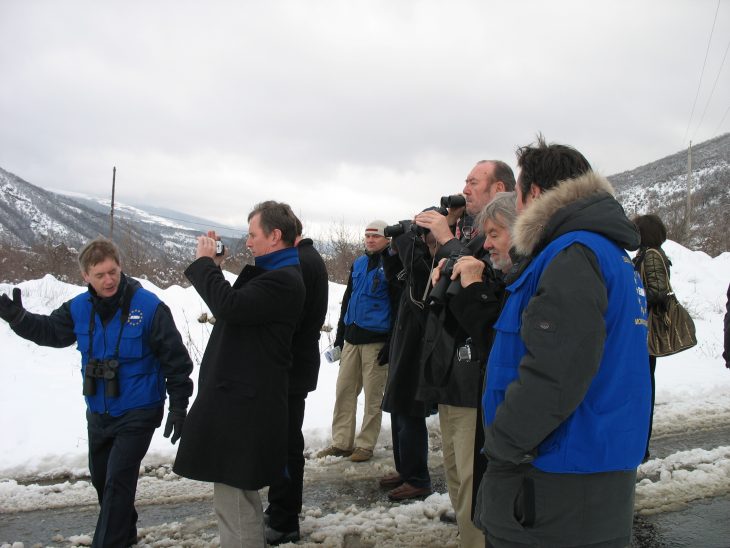 Overall a great deal has been achieved in a short period in Georgia. There are very grave difficulties, but these are being tackled by an able, innovative and optimistic people.

The Russian presence in Abkhazia and South Ossetia

The Georgians are determined to press ahead in their application for EU and NATO membership, and would not be intimidated by Russian opposition.

Understandably this was the main theme on the minds of the parliamentarians we met. They were grateful for UK support but strongly urged us to continue to put pressure on the Russians to withdraw, and to support their application to become a member of both the EU and NATO.
A more nuanced approach was put forward by the head of the EU Monitoring Mission, Ambassador Haber. He did not see any fundamental change for the next ten years and stressed that the Georgians must seriously engage with the Abkhazians and South Ossetians.

Whilst Russian aspirations in relation to Georgia would not change (which at the least presumably means decisive influence), they could come to see that this was best achieved with a co-operative Georgia, not a hostile one. This change would be related to a change in attitude within Abkhazia and South Ossetia, who do indeed wish to affirm European values but are held to Russia at the moment by financial considerations.

The importance of keeping non-Russian voices in Abkhazia was also stressed by Sir Brian Fall, UK Special Representative for the South Caucasus, before we left the UK and by our own embassy in Georgia.

The President of the Georgian Foundation for Strategic and International Studies, Alexander Rondeli, also took a more nuanced approach, contrasting the attitude of the present Georgian Prime Minister, who seemed to think that Georgia’s best interest was served by bad relationship between the USA and Russia,(hence the suggested interest in a Republican win at the next election) with that of the past, which thought Georgia’s best interest was served by a good relationship.

The Georgians are determined to press ahead in their application for EU and NATO membership, and would not be intimidated by Russian opposition.

The development of democracy

A great deal had been achieved, not least the elimination of corruption from the police, and the new constitution for 2012. That will mean a shift in power from the President to a Prime Minister elected by parliament. However, significant concerns were expressed.

There is no real ideological difference in parliament between government and opposition, only a small right and centre/right empahasis. The non parliamentary opposition is very divided.
The government has effective control of the broadcast media. There are three major channels located off shore, whose ownership is not public. Though there are alternative view points these only have a small share of the audience. There is a great disparity in political funding. There is no investigative journalism. So, according to critics, there is a “monopoly of political space, a monopoly of economic space and a monopoly of media space”

The judiciary badly needs reforming. At the moment, prosecution assumes conviction. Only 0.1% of those prosecuted are found not guilty. There are 25,000 people in prison, a very high number for the size of the population.

Attempts appear to have been made to control the teachers union, which by its nature has significant influence, both in the appointment of key positions and how people vote.

Labour laws are not properly in place. The government have been deregulating as much as they can both to eliminate bureaucracy (with its intimate link to corruption) and to attract external investment. This investment is not just from reputable international countries but from Russia, the Ukraine and the Arab world who may welcome lack of labour regulation. Are they behind the off shore media stations?

The Georgian Orthodox Church is very well supported, particularly by young people, and Patriarch Ilia II, who has been in position for 33 years is highly revered. However, the teaching of the church on moral issues is at odds with Western European liberalism (which is present in the new young political elite). The Georgian Orthodox Church has a recognised legal position in the constitution, but the Patriarch told us he is supporting a legal recognition for other faiths.

Historically, Georgia is a country where Jews, Muslims and Christians have always lived in peace with one another. Asked recently about Russian political pressure on the Russian Orthodox Church, which has close links with the Georgian Orthodox Church, the Patriarch replied: “It is none of our business whether or not the Russian Church is a carrier of official policy. We would better mind our business and take care of our problems.”

There were stories, somewhat vague, about a shadowy secret police.

Clearly, he is a very able man, firmly pro-western, but with a bad personal relationship with Putin. For obvious reasons he declines to say whether he will seek to be elected Prime Minister under the new constitution.

Although he fought a war and lost 20% of the country as a result, and was very nearly toppled by popular demonstrations in its aftermath, he has an extremely high popularity rating. Three reasons, in addition to the manipulation of his media image, are given for this puzzling fact. The Georgians are a proud people, and it is better for them to have fought and lost rather than not to have fought at all. If they had not fought the situation would by now be even worse. If the Russian aim was to topple the government, they failed, so the Georgians, a very optimistic people, can see the war as a victory.

Inflation is high, as is unemployment. In the many rural areas people survive at subsistence level.

External investment in the country continues and the economy has clearly improved. High hopes are put on the development of the tourist industry, but it is very slack at the moment. Agriculture remains weak, but there are plans to develop it through the planting of hazel nuts, apples and better seeds for many crops, and building centres of distribution for export to surrounding countries.

The crunch will come in 2013/14 when Georgia will have to start paying back the capital, and well as the interest, on its big loans.

1 There is a law in place concerning the ownership, transparency and accountability of the media, but it is recognised that it is ineffective and amendments to the Georgian law on broadcasting are being proposed. 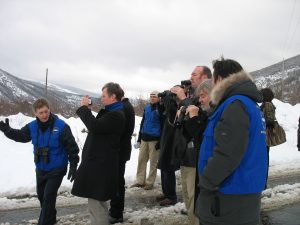