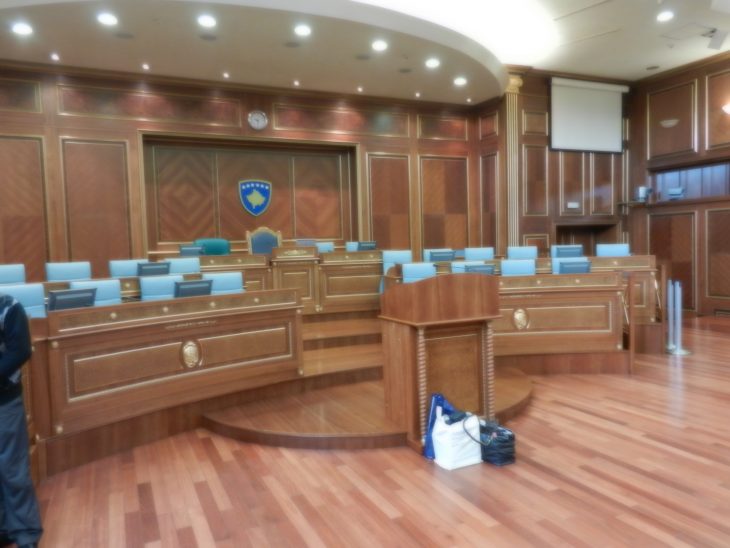 Kosovo is the newest independent country in Europe born out of the wars following the break up of Yugoslavia.

After NATO intervention, a UN Interim Administration was established. The first national elections were held in 2001. Independence was declared in 2008. Independent Kosovo is recognised by 85 states but these do not include five members of the European Union or Serbia.

The non-recognition by Serbia and the refusal of Serbs living north of the Ibar River to recognise the Republic of Kosovo government creates not only problems for stability in the area but for the European perspective which the UN and EU have for all the countries of the Western Balkans.

The delegation, invited by the Assembly of Kosovo and facilitated by the British Group of the IPU arrived in Pristina on a cold but sunny day. This weather continued for the whole of our visit.

We started work with a briefing at the residence of the HM Ambassador HE Ian Cliff to which he had invited the Head of the International Civilian Office which continues to have a general oversight of the government of Kosovo, the Deputy Commander of KFOR the NATO led peace keeping force in the country; and the American Ambassador.

On the first full day of the visit the delegation was received by the President HE Mrs Atifete Jahjaga; the Speaker of the Parliament Dr Jakup Krasniqi; the Prime Minister Hashim Thaci and Deputy Prime Minister Ms Edita Tahiri.

The United Kingdom is given great credit for the part played in stopping the war and the part it continues to play in Kosovo. All those efforts are being supported fully by the team at our embassy under the leadership of Ian Cliff who together with his staff gave us tremendous support during the whole of our visit
During the course of the week, meetings and discussions were held with the Foreign Minister Mr Enver Hoxhaj, the Minister for European Integration, Ms Vlora Citaku, Opposition MPs and Members of the Foreign Affairs and European Integration Committees and representatives of DfId and British Council.

We visited the headquarters of EULEX and OSCE in Kosovo and later in Mitrovica we met the head of EULEX office in the North from whom we were able to hear at first hand the difficulties facing the international organisations in enforcing the law and access for the extension of the Kosovo Government’s rule to the North.

The Kosovo constitution contains detailed provisions regarding the protection and rights of the minority communities (Kosovo Serbs, Roma, Ashkali, Egyptian, Bosniak and Turkish) including reserved seats in the Assembly. A meeting with some of the members elected to the Assembly revealed that despite all the good intentions serious tensions still exist. Even those who are engaging with the Kosovo Government and its institutions by virtue of their membership of the Assembly, especially the Kosovo Serbs, are not satisfied with the conditions for their communities and the implementation of their rights under the Constitution.

After two days of meetings, the delegation travelled to Peja on a train from Pristina. The rail network is very limited and operates with rolling stock which has been provided as part of assistance from other countries. The former Swedish coaches, soon to be supplemented with others from Austria, were nevertheless comfortable and with a heating system which required the shedding of top coats.

At Peja the delegation was greeted by a band of dancers and schoolchildren in traditional costumes. The Mayor of Peja told us of his hopes of attracting investment and tourists to the area which is in the beautiful Rugova Valley. The town suffered greatly in the war and the rebuilding in a relatively short time is impressive. Streets are named after Tony Blair and Bill Clinton amongst others in recognition of the part played by NATO in stopping the Serbian forces.

Before leaving Pristina, we had met both the Grand Mufti of Kosovo who had just returned from the Haj and the Catholic Bishop of Kosovo. As religious leaders they were both concerned to see harmonious relations between the different communities whilst being concerned for the rights of their own. Now we were going to travel to the sites at the heart of the Serb Orthodox Church.

The Patriarchate at Pec (Peja) dates in part from the 13th Century and is decorated with remarkable series of frescos painted between the 13th and 17th century. It is the site of the enthronements of the Serbian Patriarchs and formerly their burial place.

The delegation then travelled to Prizren to visit the Decan monastery a UNESCO site. Both are sites of great significance to the Serb population of Kosovo and Serbia. They are however part of the heritage of the whole country, and Decan enjoyed the special protection of the Sultans for most of the Ottoman period so it is even more regrettable that in modern times both sites and others elsewhere in Kosovo need to be under the constant protection of KFOR troops. The age-old differences of the region are still close to the surface even if they are now expressed in political or ethnic terms.

In Prizren, we met the Mayor. The town is home to many different communities. (Turkish is one of the official languages of the municipality). Fortunately the town with its ancient Ottoman buildings escaped the total destruction wrought in so many towns and villages. Prizren is home to the League of Prizren Memorial a small complex of buildings with a mosque burnt down by Serbian forces in 1999 and now rebuilt. Of great significance to ethnic Albanians, this was the place where in the 19th Century the first demands were made for an independent Albanian state.

A steep climb up a narrow cobbled road running from the river up the hill towards the former Ottoman castle took us to the house of a Serb citizen who fled from the war and very recently returned to his home town after years as a refugee in Serbia. Ten thousand Serbs lived in Prizren before the war; now there are only 50. The UK has been active in promoting and funding a project to enable Serb refugees to return and some 20 houses have been built and given to the returnees. The owner was clearly pleased to have come back to his home and told us that he had experienced no hostility from his Albanian neighbours – surely a symbol of hope for the future.

Our journeys through the countryside showed us the destruction of villages and homes which took place during Milosevic’s onslaught against Albanians in Kosovo and the number of new cemeteries and memorials, a grim reminder of the cost in human terms.

The last day in Kosovo took us first to Llamkos Steel, a steel processing plant in Vushtrri. Located on a 20 hectare site, this is a 20 million Euro investment and the first such major investment from the UK. The plant had been closed for two and a half years until the takeover. The company managed to trace many of the former employees and offered them jobs which include a free meal for each shift. The work force is some 437 strong and expected to rise as production grows and the owners plans for expansion take place. The company hopes that we will soon see galvanised products and tools made in Kosovo for sale in major UK retail outlets

Our last visit was to Mitrovica where we met the Mayor and a representative of an NGO working in Kosovo and hoping soon to open an office across the river in the North. Mitrovica is a divided city following the trouble in the summer when the Kosovo authorities tried to take control of the two customs points on the border between Kosovo and Serbia. This action led to blocking of the main bridge across the Ibar from the southern half of the city to the northern half. At the time of our visit, Serbia had withdrawn from the so-called Brussels dialogue facilitated by the EU and designed to normalise relations between Serbia and Kosovo.

During our visit we had been impressed by the enthusiasm of our hosts for the future of Kosovo .We were treated with great courtesy and kindness by all we met for discussions and by all those who helped with all the arrangements. We share their aspirations for a peaceful prosperous European future for their young country.

Our visit to the barricade across the bridge in Mitrovica was however a reminder that serious and potentially dangerous divisions still exist in this country which has suffered so much in the very recent history of Europe. So much still remains to be done in education, building the economy and providing employment. It is a country which, although without debt, nevertheless relies on aid to meet 69% of its budget

To make real progress, peace and stability must be assured and the advances already made secured.

To do this the international community and the Government of Kosovo must reach out to all the citizens of the state whosoever they are and wheresoever they live if all their hopes and aspirations are to be achieved. 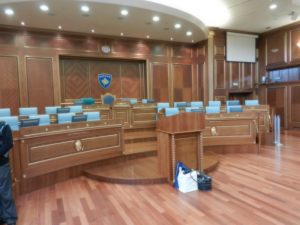