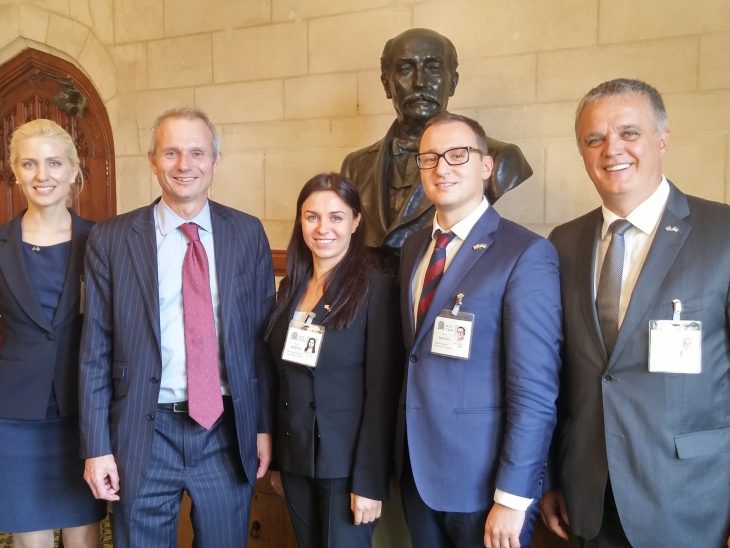 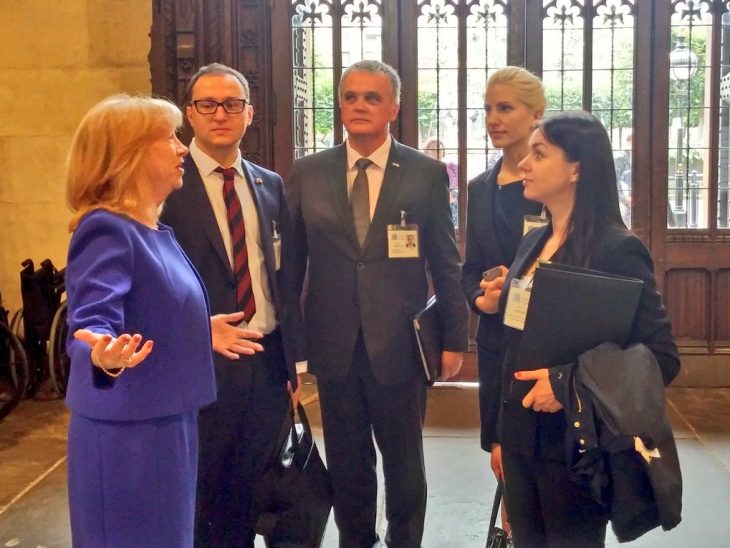 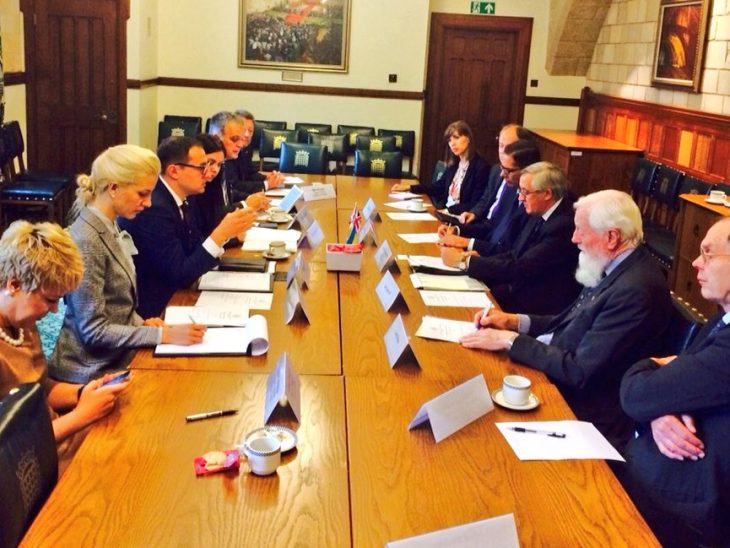 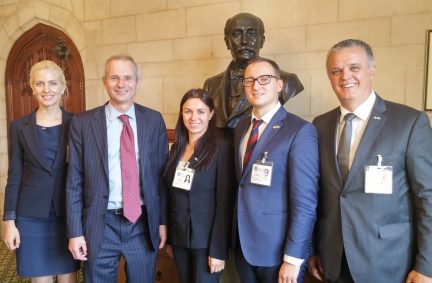 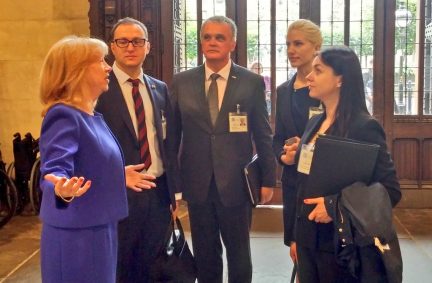 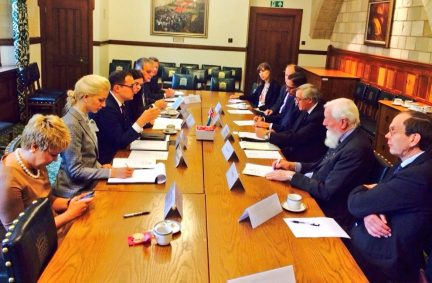 The busy two day programme started on Tuesday, 8th September, with a warm welcome to the Houses of Parliament by Deputy Chairman of Ways and Means and Deputy Speaker Eleanor Laing MP, followed by a presentation on the Westminster Parliamentary System by the Clerk of the Overseas Office of the House of Commons, Crispin Poyser. After a meeting with Sarah Lain, Research Fellow at the Royal United Services Institute (RUSI), where issues including anti-corruption reform and the reconciliation process were discussed, the delegation went to the Cabinet Office to meet with officials from different departments.

The delegation also learned about the role the Cabinet Office plays in the legislative process and its relationship with Parliament, but also updated officials on the current situation in the Rada in light of recent violent outbreaks in front of the Ukrainian Parliament’s building. This was followed by a Welcome Lunch hosted by the Rt. Hon John Whittingdale MP, Secretary of State for Culture, Media and Sport, who has long been involved in relations with Ukraine and had led the outward BGIPU delegation earlier this year before his appointment to government. The lunch was attended by several Members of both Houses and the Foreign and Commonwealth Office (FCO), and some in-depth conversations about current issues in both parliaments took place.

The delegation then went to the FCO to participate in a Cross-Whitehall Roundtable, which included several representatives from the FCO, the Ministry of Defence, the Department for Energy and Climate Change, the Department for International Development, and the British Council. As during most of the meetings held throughout the day, the delegation started with a brief overview of the current situation in the Rada and in particular the legislative process of the constitutional amendment, and expressed their concerns about the deteriorating situation in East Ukraine. During the Q&A session participants of the roundtable were able to ask the delegation questions and to hear their views on issues such as the implementation of the Minsk Agreement and the monitoring of the Eastern border. These issues were also discussed during a meeting with FCO Minster for Europe, the Rt. Hon David Lidington, who the delegation met straight after. Back in Parliament, the last meeting for the day involved two members of the House of Lords’ EU Sub-Committee on Foreign Affairs, Baroness Armstrong and Lord Risby, who is also Chairman of the British Ukrainian Society.

The programme continued early Wednesday morning with a discussion meeting with members of Chatham House’s Ukraine Forum Steering Committee. This was followed by a parliamentary roundtable chaired by Sir Gerald Howarth MP, who is also Chairman of the Ukraine APPG. Several Members of both Houses, including Jonathan Djanogly MP, Lord Hamilton, the Earl of Sandwich, Clive Betts MP and Lord Hylton participated. The delegation then very much enjoyed watching Prime Ministers Questions from the Speakers Gallery, which was particularly interesting as it was the first time after the summer break, but also as Members paid tribute to Her Majesty the Queen becoming the longest reigning monarch in British History that day. The ensuing lunch was hosted by Lord Davies of Stamford, who had not only participated in the outward delegation as well, but had also visited Eastern Ukraine by himself shortly afterwards.

Meetings during the afternoon focused on the military situation in Eastern Ukraine, as the delegation met with Dr Julian Lewis MP, Chairman of the Defence Select Committee, and several other Members of the Committee, and in the ensuing meeting with officials from the Ministry of Defence, who briefed the delegation on the training the UK is providing to Ukraine. The Ukrainian parliamentarians expressed their country’s gratefulness for what the UK has already provided and done, but also highlighted the need for more, especially support for the reform of their Ministry of Defence and Army. Part of the delegation then met with Ian Wright MP, Chair of the Business, Skills, and Innovation Select Committee, while Svitlana Zalishchuk, who is a Member of the Ukrainian Foreign Affairs Committee, observed part of the UK Foreign Affairs Committee’s (FAC) evidence session with Foreign Secretary Rt. Hon Philip Hammond MP, by whom she was briefly met afterwards. In the last meeting of the day Crispin Blunt MP, Chair of the FAC, and other members of the Committee had the chance to hear from the delegation about the situation in Eastern Ukraine.

As a very fitting way to finish the quite intense but very productive visit, BGIPU Chair Nigel Evans MP hosted a dinner in the IPU Room in honour of the delegation, where Members including Tim Loughton MP, Baroness Smith of Gilmorehill, and Steve Pound MP had the chance to raise questions with the delegation not only about Ukraine’s domestic challenges and the conflict in the East, but also to discuss broader issues of concern for European as well as global security, in particular the scale and threat of Russian ambitions. The evening and the visit ended with Members from both countries expressing their strong commitment to a closer relationship between the UK and Ukraine Parliaments. 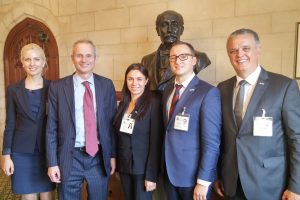 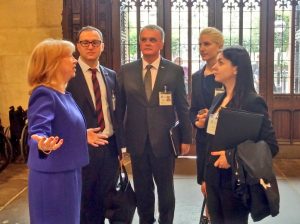 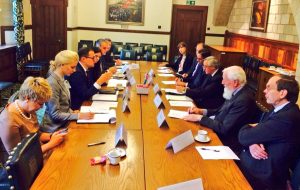