Presidential Statement on the IPU Assembly 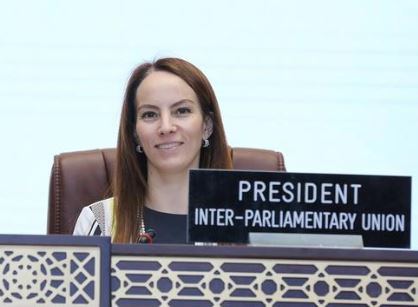 Today – on 16 April 2020 – we were supposed to meet in Geneva at the opening of the regular 142nd Assembly of the Inter-Parliamentary Union. As you know, the Assembly has been postponed, as have practically all major multilateral meetings planned for this time.

The human race faces a new global threat, the biggest challenge to date of the new millennium: the COVID-19 pandemic. The number of people infected is already into seven figures, and there are tens of thousands of victims all around the world. I am absolutely sure that we all commend the heroic work of medical officers, scientists and many other essential staff who are working to protect us from the most dangerous threat to modernity, sometimes at the cost of their own lives.

The IPU, throughout its long history starting in the nineteenth century, has always stood for the principle that global challenges require global responses. That means that only through collective action and reaction can we confront threats to humanity: dangerous diseases, climate change, international terrorism and unsustainable development.

In that sense, our Organization has always seen its essential mission as bringing together the parliaments of the world, whose role is steadily growing, not only in strengthening the foundations of democracy at the national level, but also as platforms for developing joint solutions to international problems. I recall in particular that last October the IPU Assembly in Belgrade, Serbia, adopted a resolution on achieving universal health coverage by 2030. In that resolution we noted the absolute importance of building reliable primary health-care services and strengthening health systems, highlighting also the role that such systems play in ensuring global health security. As we can see, life has confirmed the relevance and practical importance of our work.

I would therefore like to emphasize that this work should not stop for a day, even given reasonable restrictive measures at the national and supranational levels. At this stage, we look forward to all the planned activities of the busy 142nd Assembly agenda at our next meeting in Rwanda in October 2020. In this regard, I believe it is important to include in the programme of that Assembly a special session on combating pandemic threats and on action taken by parliaments, best practices from countries which are most at risk of disease proliferation, and proposals to support weakened economies and health systems.

But even before the October session, I call on my colleagues from national parliaments to relentlessly pursue our joint efforts on the most important topics on the IPU agenda. Thus, in June we will once again celebrate the most important event in our calendar – International Day of Parliamentarism – which is an important occasion for us to “compare notes” and to mobilize the resources of international parliamentary diplomacy in the search for joint responses to the challenges of our time. And later on, in August, the Speakers of the national Member Parliaments of the IPU will, we hope, still be able to join forces in order to work out additional proposals at their Fifth World Conference in Vienna, Austria.

At this time, our Assembly should have been meeting on the eve of a very important date for all humankind – the anniversary of the end of the Second World War. The victory over Nazism in the bloodiest war in the history of our civilization is the common heritage of all humankind and should continue to be a guiding star for all of us in rejecting any manifestations of intolerance, hate speech, discrimination, racism and neo-Nazism.

75 years ago, the San Francisco Conference began in April and culminated with the signing of the Charter of the United Nations, which entered into force in October 1945. Since that time, the rule of international law has successfully prevented our nations from entering into another global conflict and has contributed to the solution of many other common problems of yesterday, today and tomorrow. The IPU has always supported the activities of the United Nations, acting on many occasions as a constructive and reliable partner.

I believe that all the joint victories and successes of humankind should constitute a kind of “gold reserve” of our historical memory – the best examples of how a joint mind and will can defeat common enemies, despite differences in ideology, political systems and values.

I call on the IPU Member Parliaments to support international efforts to overcome the barriers to pooling our planet’s resources against common threats. In particular, I uphold the UN Secretary-General’s call for an immediate global ceasefire in all corners of the world, as well as for the creation of corridors for life-saving aid and, at least for the duration of the pandemic, the waiving of unilateral sanctions imposed on countries to ensure access to food, essential health supplies, and COVID-19 medical support.

I fully share the words of UN Secretary-General António Guterres: “This is the time for solidarity not exclusion”. It also means that the time has come for active parliamentary diplomacy.

We stand together. Our parliamentary solidarity is another important response to the challenges of our time. Let us stay in contact during this demanding time of necessary self-isolation. Let us support each other. This is the only way we can look with confidence to the healthy and safe tomorrow that we all want and deserve. 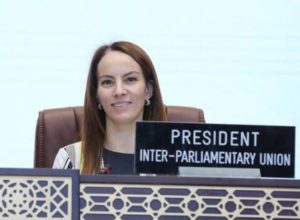