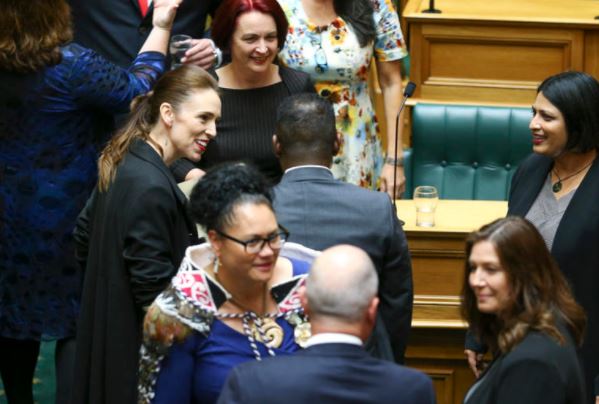 2020 elections in New Zealand saw an unprecedented increase in the numbers of women and traditionally under-represented groups. © Hagen Hopkins/Getty Images via AFP

Following elections in 2020, the global proportion of women in parliament reached a record 25.5 per cent, representing an increase of 0.6 points compared with 2019, according to the IPU’s latest Women in Parliament report.

The IPU has tracked women’s participation in parliament for decades, allowing it to measure progress and setbacks. Every year, the IPU publishes a report to coincide with International Women’s Day on 8 March. Although progress has been steady over the past few years, it is still excruciatingly slow. At the current rate, it will take another 50 years before gender parity is achieved in parliaments worldwide. As at 1 January 2021, women accounted for 50 per cent or more of members in just three parliaments (Rwanda, Cuba and the United Arab Emirates).

The President of the IPU Forum of Women Parliamentarians and Kenyan MP, Susan Kihika, said “While we note that a quarter of MPs in the world are women, we see how this still falls far short of representing half the world’s population. Unleashing the full potential of women who make up that 50 per cent should be our number one priority.”

The IPU President, Duarte Pacheco, said: “Achieving gender equality in parliaments is a shared responsibility of men and women, and especially of men and women MPs, who by definition, are elected to lead. Only by working together and taking strong action can we move forward and accelerate the pace of change.”

The IPU Secretary General, Martin Chungong, said: “Progress is being made, but parliaments must be more open to women. They should be gender-sensitive and transform their functioning and structures to facilitate work-life balance for women and men, have zero tolerance towards all forms of violence against women in politics, promote legal change for better inclusion of women and be key actors in women’s political empowerment.”

The IPU Women in Parliament report shows that the COVID-19 pandemic had a negative impact on elections and campaigning in 2020. National parliamentary elections were postponed in nearly 20 countries, mainly due to COVID-19, but went ahead in 57 countries overall in 2020. The economic downturn caused by the pandemic exacerbated existing gendered socio-economic inequalities, and adversely affected women’s ability to campaign for office and access campaign funding. Online violence against women has become even more widespread, and has been a particular threat to women’s participation in public life.

However, the shift to remote, technology-driven parliamentary practices may have a potentially positive long-term impact for women in parliament. Virtual voting and sittings have helped promote participation by members for whom travel is difficult, including those with disabilities or with young children. Flexible and remote workplace practices may allow more women and men to combine caring responsibilities with political career aspirations.

Likewise, peer-to-peer learning and greater engagement with virtual networks of women parliamentarians internationally can contribute positively to the resilience and empowerment of women MPs through the pandemic and beyond.

Women in the top leadership of Parliament

The United States made history in 2020 with the election for the first time of a woman as Vice President. Vice President Kamala Harris also constitutionally becomes President of the Senate. With Nancy Pelosi as Speaker of the House of Representatives, both chambers of the US Congress are now presided over by women.

Well-designed quotas are the key to progress

Generally, well-designed and adequately enforced quotas acted as a shield against backsliding in 2020.

Progress in all regions of the world in 2020

Once again, the Americas outpaced other regions with women making up 32.4 per cent of MPs. This was despite political upheaval experienced across Latin America, in particular in Chile, Colombia and Ecuador. In the United States, 2020 marked the highest levels in history of women’s representation in its national legislature, at 26.9 per cent of the two chambers combined.

In sub-Saharan Africa, Mali and Niger made significant gains in women’s representation, despite grave security challenges. New or revised quota policies helped protect these gains against instability. These countries are testament to the fact that women’s role in transition processes is key to their political empowerment.

In Europe, of 14 parliamentary renewals in 2020, four countries – Ireland, Serbia, North Macedonia and France – witnessed women’s representation exceed 30 per cent in at least one chamber. Three countries – Azerbaijan, Czech Republic and Romania – failed to reach the 20 per cent mark.

Within the Middle East and North Africa region, Egypt reached historic highs for women in parliament thanks to a new quota law for the House of Representatives. However, taken as a whole, the proportion of women in parliament in the region is the lowest among all regions at 17.8 per cent, all chambers combined.

Gains in Asia were driven by women’s representation in the upper houses of Tajikistan, Kazakhstan and Uzbekistan. Of parliamentary renewals in 2020, only Nepal exceeded 30 per cent women, sustaining a strong track record on women in parliament over the past decade.

With the exception of New Zealand, women’s representation in parliaments in the Pacific remained consistently low or entirely absent in elections held in 2020. New Zealand’s new parliament made history with more women, people of colour, LGBTQ+ and Maori MPs than at any time in the past. 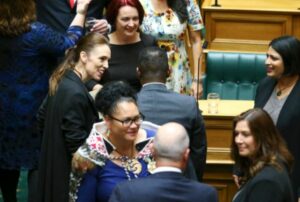 2020 elections in New Zealand saw an unprecedented increase in the numbers of women and traditionally under-represented groups. © Hagen Hopkins/Getty Images via AFP