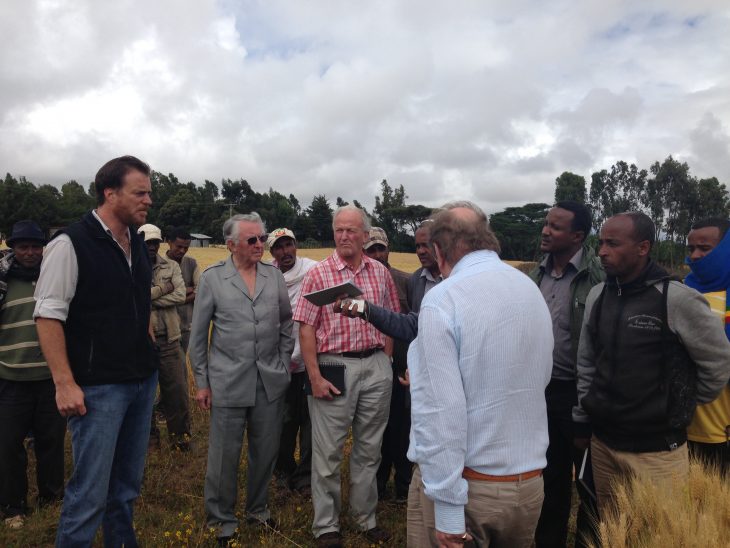 The Delegation discussing crop methods with farmers near Butajira

Ethiopia are one of the few countries in Africa to implement the 2003 Maputo commitment to invest at least 10% of their GNI into agriculture. They have consistently invested well in excess of 10% and there is no doubt about the Government commitment. I also felt that the Minister of Agriculture’s plans were well intentioned in a country where not only do mountains and drought conspire against large scale production, but also where farm produce comes from a hugely diverse range of production zones and also is grown by distinctly diverse cultures and communities. Ethiopia is to be congratulated ongoing some way to overcoming some of these obstacles. They have done much to encourage agrarian communities to get together to solve their own problems and invest their own labour in community projects. The fact that Ethiopia avoided the worst suffering of the 2011 drought is testimony to the success of the Government’s policies.

However, in our very short visit I got the impression that, as with all governments, there is need of more funding to fully implement their plans. As in the UK, agricultural research is struggling to deal with the enormous challenges. We also learnt that the number of agricultural extension officers was not up to compliment – although 60,000 is a pretty ambitious target – and were not always as well trained as would be desirable.

The Government is still hampered by an obsession to control everything itself, including land ownership. There is no doubt in my mind that independent fertiliser companies and mobile phone providers could promote cheaper and more efficient services without the delaying red tape that surrounds those industries. Mobile phones are now crucial to agriculture in Africa, both for information and banking services, and anyone should be able to go into a shop and buy a phone and sim card over the counter for immediate use – as elsewhere.

Because of “no discussion” governance, there is an over optimistic and “over commanding” approach to agriculture. Although the Government have clearly learnt from the mistakes of the ‘90s when they attempted to control and move whole communities, there appear still to be mistakes being made. For instance, trying to turn wandering pastoralists into fixed livestock farmers is not only counter to their culture, but also, we were told, counter to what is the best environmental practice for those semi-arid grasslands. There is no doubt that the Government have to continue to move the pendulum further towards guiding and assisting and away from command and control.

In passing, I was pleasantly surprised by the work being done by the African Union and UNECA on guidance and framework policies such as nutrition and land tenure. I thought that seemed to be very helpful and bodes well for the 2014 Year of Agriculture.

Lord Cameron of Dillington visited Ethiopia as part of the BGIPU Delegation, you can read the full overview report of the visit here. 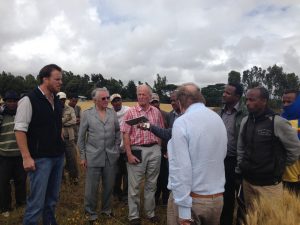 The Delegation discussing crop methods with farmers near Butajira