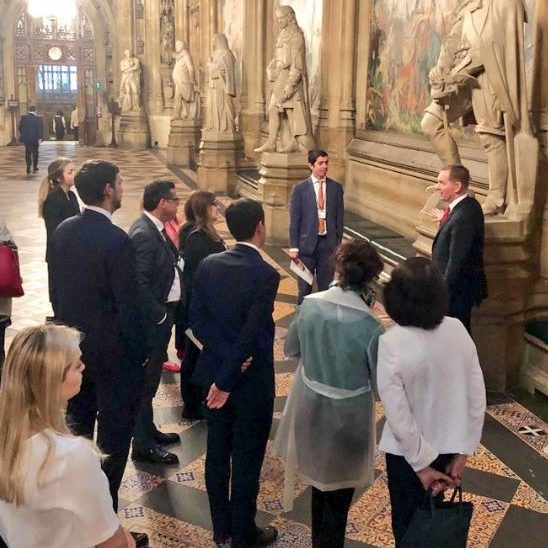 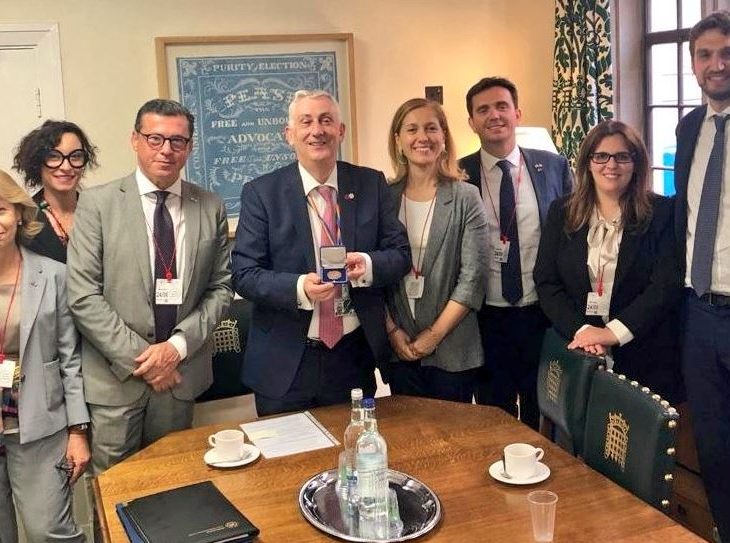 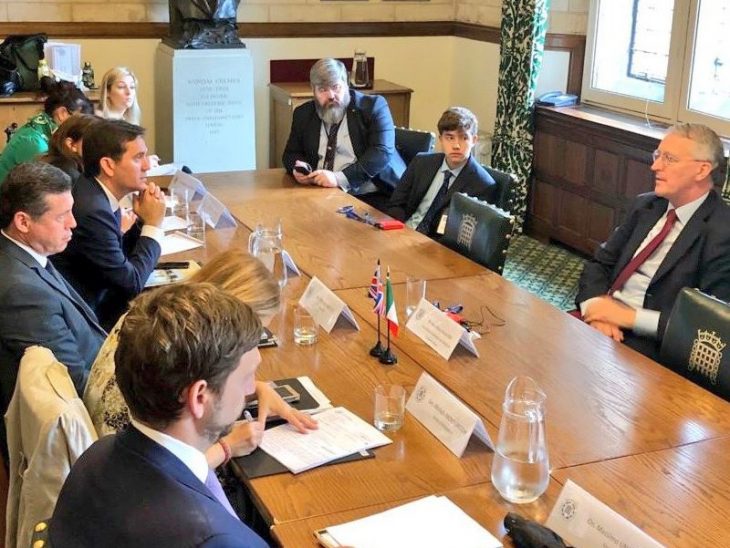 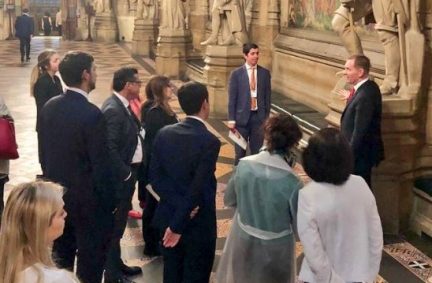 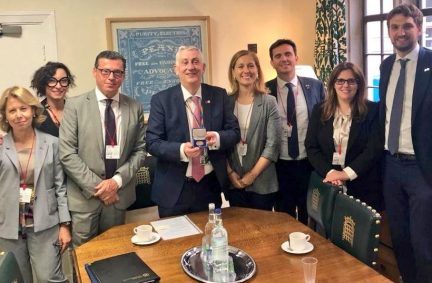 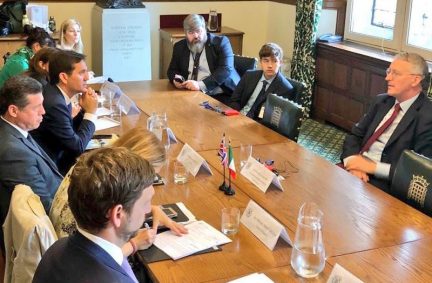 On 23-26 June 2019, BGIPU hosted a delegation of six parliamentarians from Italy. The visit reinforced existing links between the Italian and UK Parliaments and came at an interesting time with the recent European Parliament elections and current Conservative leadership race. The visit was led by Senator Michela Montevecchi, President of the Bilateral IPU UK-Italy Friendship Group. She was joined by a cross-party group of parliamentarians composed of Five Star Movement, Forward Italy, Free and Equal, and Democratic Party Members and Senators- Alessandro Cattaneo, Raffaele Fantetti, Giuseppina Occhionero, Elisa Siragusa and Massimo Ungaro.

The programme commenced on 23rd June with a useful and informative overview of the Westminster System by Lynn Gardner, Principal Clerk of the Overseas Office. They then visited Dover House for a meeting with the Scotland Office where discussions on the principles and history of devolved powers and the current issues affecting Scottish devolution took place. Of particular interest was the power of Westminster to call a referendum. This was followed by a meeting with the British Council, during which a summary of the British Council’s plans for an Italian cultural season was given.

The delegation was hosted at lunch by Alberto Costa MP and Ellie Reeves MP, joint Chairs of the Italy APPG, and joined by Paul Farrelly MP, Tonia Antoniazzi MP, Tom Tugendhat MP and Baroness Bonham Carter where informal discussions about bilateral and cultural relations were exchanged. After lunch they met with the Parliament Library’s Brexit and Constitution experts, Graeme Cowie and Stefano Fella. The purpose of this meeting was to show the important work of the library in answering questions during the Brexit process. The delegation left with an unbiased understanding of the constitutional technicalities of each of the proposed approaches to the UK’s exit from the EU. This was followed by a meeting with Rt Hon Sir Lindsay Hoyle MP, Deputy Speaker of the House of Commons. As well as explaining the requirements of the Deputy Speaker, he gave insight into his position as Chairman of Ways and Means and the role he plays in ensuring the security of members of parliament both on and off the parliamentary estate.

The second day began with a tour of the Palace of Westminster given by Chris Bryant MP who shared the history and functioning of the building with the group. He also gave them a few lesser-known facts and presented them with guide books translated into Italian, so they could read up when they returned home. This was followed by a meeting with Rt Hon Hilary Benn MP, Chair of the Committee on Exiting the European Union. In this session they discussed the merits of a second Brexit referendum and the possibility of the EU granting the UK another extension should they require it. The Italian side expressed a strong commitment to giving the UK an extension to avoid a ‘no deal’ outcome.

After a lunch hosted by Rt Hon John Whittingdale MP, Chair of the BGIPU, the delegation met with Barry Gardiner MP to share views on climate change issues. They discussed Italy and the UK’s joint bid to host COP26 and the destructive impact that the effects of climate change will inevitably have on historical monuments in European cities. A roundtable with the Italy APPG then followed, chaired by Alberto Costa MP and Ellie Reeves MP. During this session, they examined mutual concerns facing both the UK and Italy and spoke of plans for future cooperation between the two countries. The delegation also praised Alberto Costa MP’s efforts to secure settled status rights for European citizens living in the UK and vowed to try to do the same for British citizens living in Italy.

Meetings for the day closed with an exchange with the EU Select Committee on the work of the Committee and a discussion on the complexities of Brexit. This was attended by the Chair of the Committee, Lord Boswell of Aynho, as well as Baroness Falkner of Margravine, Baroness Armstrong of Hill Top and the Earl of Lindsay. In the evening, the delegation enjoyed a reception in Speakers House to celebrate the 130th anniversary of the IPU. Here, they heard addresses from Rt Hon John Bercow MP, Rt Hon Jeremy Corbyn MP and Rt Hon John Whittingdale MP who each emphasised the importance of parliamentary dialogue between countries and praised the work of the IPU in promoting fundamental rights.

On the final day of the programme, the delegation met with Robin Walker, Parliamentary Under-Secretary for the Department for Exiting the European Union. He addressed the government’s key priorities and answered Brexit related questions posed by the delegates. They then spoke with Stephen Doughty MP from the Home Affairs Committee. This meeting was significant because of the time spent discussing the residency status of EU nationals living in the UK and the existing flaws in the UK’s current immigration systems. Following this they attended Prime Ministers Questions, then onto a lunch hosted by Baroness Anelay in Peers Dining Room. She was joined by members of the House of Lords and House of Commons who spoke with the group about the current political dynamics in Italy. The visit closed with a meeting with Sir William Cash, Marcus Fysh MP, Kelvin Hopkins MP, David Jones MP, and Andrew Lewer MP of the European Scrutiny Committee. This session saw a lively debate about the UK’s bargaining power in Brexit negotiations and the challenges and opportunities the UK will face when taking forward its own trade negotiations.

The visit was a well-timed opportunity for a cross-party group of Italian parliamentarians to build upon their understanding of Brexit from a range of differing UK perspectives. It was also useful for UK Members to gain knowledge of the key issues at play in Italy and to hear how the UK’s activities are perceived abroad. The visit reinforced the already strong relationship and saw willingness on both sides to foster closer bilateral links in the future. 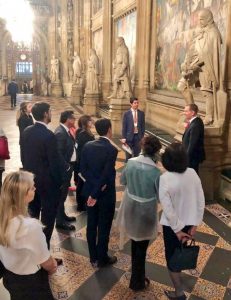 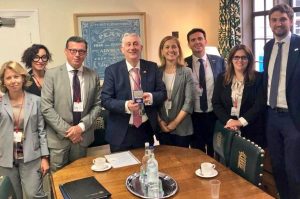 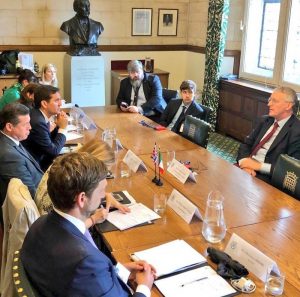