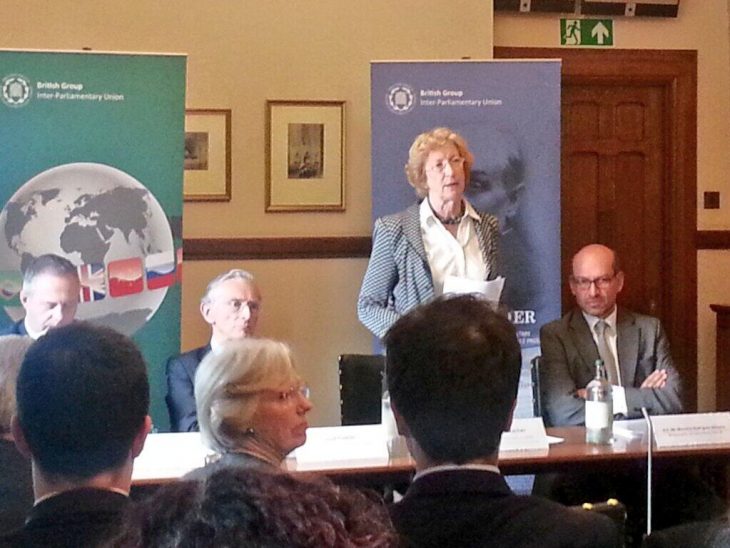 Baroness Meacher as Chair of the APPG for Drug Policy Reform was invited by President Otto Perez Molina of Guatemala to attend the 43rd General Assembly of the OAS from 4-6 June and she reported her reflections back to counterparts in UK Parliament.

The APPG for Drug Policy Reform were invited by President Otto Perez Molina of Guatemala to attend the 43rd General Assembly of the OAS from 4-6 June, as Observers. This report represents my reflections on the meeting.

The General Assembly was attended by 28 Foreign Ministers of the American nations, including John Kerry, Secretary of State of the US.

The meeting covered a number of subjects but the main theme was drug policy and the implications of the drugs trade for the Americas.  There was a lengthy debate upon the Malvinas/Falkland Islands but this is not the subject of this brief report.

The background to this General Assembly had been the Presidential summit the previous April in Cartagena,  Colombia, chaired by President Santos, when the decision was made that drug policy would be the theme for this year’s General Assembly.   At that meeting it was agreed that the Organisation of American States would take responsibility for producing two reports: one an analytical report on current policies;  and the second setting out a number of scenarios which could occur and the implications of each of those scenarios.   It was agreed in Cartagena that these reports would not include any recommendations.

A scenario team of experts, many from the Americas but a few from elsewhere, met to hear evidence from witnesses who were also experts in the subject, and to agree the thrust of the reports.  The process and production of the reports had been allocated to independent consultants at the insistence of the Mexican President.  An initial draft was produced by the consultants and the final draft prepared by the OAS under the direction of Adam Blackwell.  (I had very different accounts about how the reports had been prepared from the Mexican delegation and from Adam Blackwell.   What I have said here represents my understanding of the process from these two conversations).

The year of analysis of current policies and their implications, discussions and development of thinking about the different scenarios were clearly at least as important as the General Assembly itself.

Also important had been the declaration of three Latin American Presidents of Mexico, Colombia and Guatemala to the UN in 2012 pressing for an urgent review of the current international drug policy;  and that the review should be conducted “on a scientific basis in order to establish effective public policies in this area.”

The four scenarios had been presented as options.  The debate between the foreign ministers made clear that in fact options one, two and three are all compatible and important.  The option 1 focus on institution building, improving governance and fighting corruption  will be essential to progress. The second scenario – decriminalising drug use, switching resources from criminal justice to treatment of drug dependence, exploring the regulation of cannabis and other measures to reduce demand for hard drugs are vital in the demand countries;  but so too, for Latin America, are the bottom up social development and preventive programmes outlined in scenario 3.

The overwhelming message from the Latin American foreign ministers was the need to strengthen their governmental institutions, tackle corruption and strengthen the rule of law.  The need to address poverty, the degradation of the environment due to the illegal drugs, trade and violence against women were three other important themes but none of these can be dealt with adequately while governments and judicial systems are corrupt and/or weak;  little is raised in taxes;  the pay of local officials is very low and education very limited.

John Kerry for the US, and on behalf of President Obama, welcomed the debate on drugs.  He said the US takes seriously its responsibility in the drugs area, is uniquely able to strengthen institutions and will do that.    He also supported one of the strong themes of the General Assembly that countries including the US need to work together on the problems.  Kerry also referred to the importance of upholding human rights.

Kerry acknowledged that they had not done enough to reduce demand and yet referred to a 50 per cent fall in cocaine use in the US.

The most significant shift in US drug policy in 2013 has been the recognition that drug dependence is a health problem.   For the first time drug treatment will be covered by US health insurance.

This is of momentous importance.   The 1988 UN Convention explicitly says that drug possession and use must be treated as crimes.

The transit countries had very different perspective from the producer countries.  But the policy conclusions were broadly similar.

Brazil will be a powerful player in the future.  Brazil welcomed the drugs debate and emphasised the need to focus upon prevention and demand reduction;  also respect for human rights, the rule of law and respect for the individual.   Brazil have reduced inequality, improved education and social development.   They are a major producer of cannabis and therefore have a different perspective from the cocaine producers (Colombia, Bolivia, Peru) and the transit countries (Mexico, Guatemala,  the Caribbean nations, Panama).

The delegations each presented their points of view for six minutes.   Much of what was said referred to progress made on a range of issues, helpful for their drugs work but not directly drug policy changes.

The Presidents of the Inter American Court of Human Rights and of the Commission of Human Rights made strong statements about the impunity issue, the death penalty and other human rights issues.

The important theme was a consensus that this debate on drug police is very helpful;  also that the debate needs to continue.   The decision was made that a pan Americas meeting on drugs should take place next year and that prior to that meeting individual countries will have internal debates; then groups of countries will have regional debates.  The organisation of the all Americas meeting was not resolved.   Only the US, Canada and Peru were opposed to the proposal;  some countries wanted CICAD to organise the meeting while others wanted a CICAD meeting which would focus upon technical issues and also a political meeting.  Foreign Minister Carrera of Guatemala was pressing for the latter option.

Finally it was decided to delegate this matter to the OAS in Washington.  The Mexicans, Colombians and many others will press hard for a political meeting.  However, Gil Kerlikowski remains Obama’s drugs tsar and he is a hard line opponent of any loosening of the constraints of the UN conventions, despite his recent statement suggesting that his thinking had evolved towards a more health oriented approach.

The Declaration issued at the conclusion of the General Assembly

The key points in the Declaration may be summarised as:

·  that the Americas must undertake a coordinated search for effective solutions to the world drug problem;

·  that new evidence based approaches should be encouraged;

·  that the three UN Drugs Conventions be fully implemented;

·  that the Americas encourage broad and open debate on the world drug problem;

·  the all have a commitment to strengthen the capacity of their states and institutions in order to deal with the world drug problem;

·  that drug abuse is also a public health problem.  Therefore health systems including prevention, treatment and rehabilitation must be strengthened;

·  greater efforts be made to reduce the demand for drugs;

·  more effective measures must be developed to prevent the illicit manufacture and trafficking of firearms, ammunition, explosives and related materials;

· that money laundering be effectively tackled;

·  that drug policies be scientifically evaluated and lessons learned;

·  to reduce the prison population through greater access to rehabilitation and health care, and social reintegration programmes;

·  that the Americas take steps to reduce the causes of poverty, social exclusion and environmental degradation.

This declaration is ambiguous but does encompass the main messages from the Scenarios report.  The apparent inconsistency between the reference to the UN Conventions on the one hand, and many points of the declaration on the other reflects the different perspective of the US and Canada compared with the majority of Latin American States. 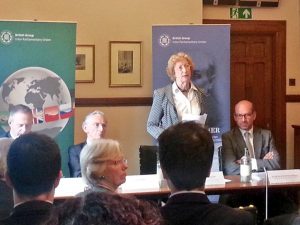 Baroness Meacher as Chair of the APPG for Drug Policy Reform was invited by President Otto Perez Molina of Guatemala to attend the 43rd General Assembly of the OAS from 4-6 June and she reported her reflections back to counterparts in UK Parliament.