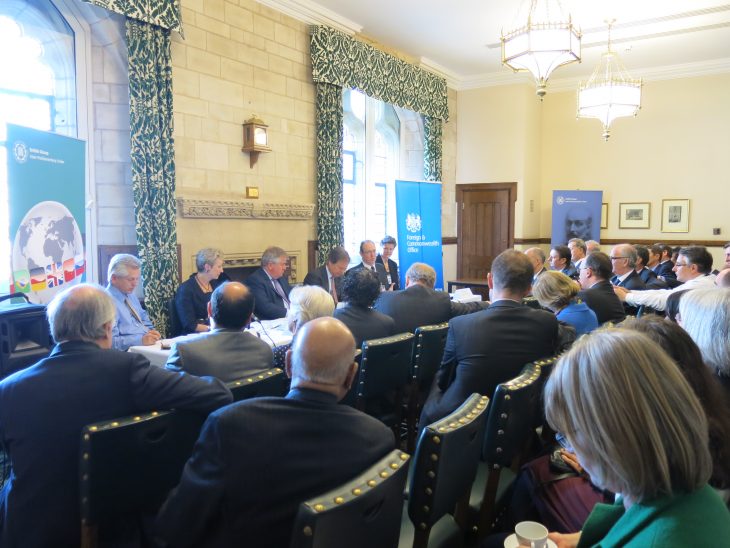 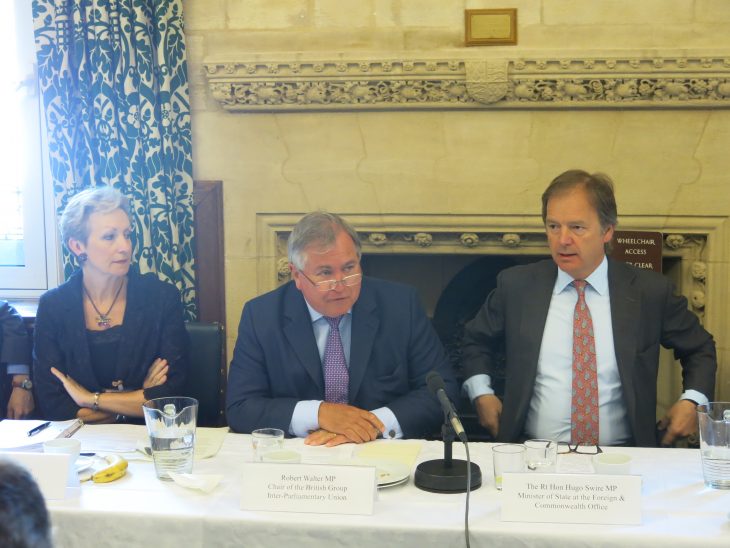 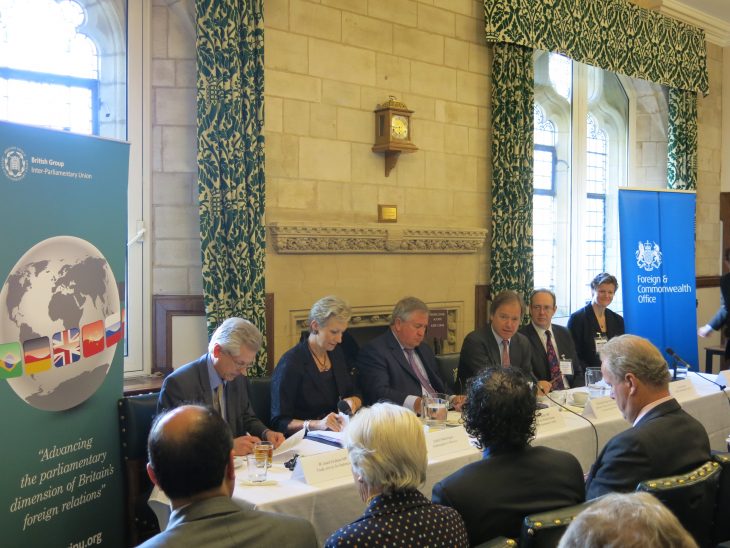 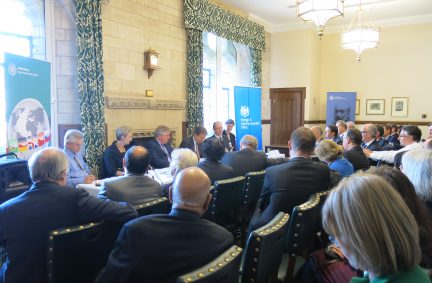 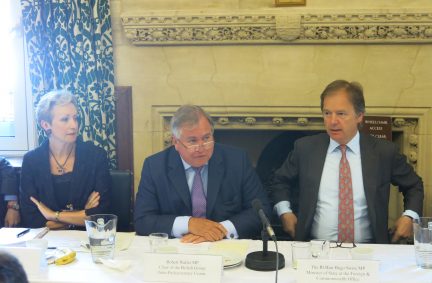 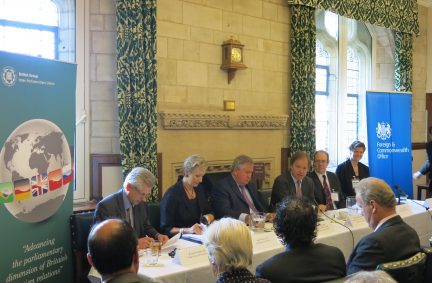 BGIPU and the Foreign and Commonwealth Office (FCO) co-hosted a roundtable discussion between parliamentarians and visiting UK Heads of Mission on 16 May under the chairmanship of FCO Minister, Hugo Swire MP. The discussion focused on efforts by the UK Government to strengthen bilateral relationships with key emerging powers in order to expand opportunities for the UK. There was detailed consideration of the important role parliamentarians could play in ensuring the UK was well-positioned to take better advantage of the opportunities such fast growing economies present.

FCO Minister, The Rt Hon Hugo Swire MP, chaired a joint BGIPU/FCO discussion on 16 May for parliamentarians to hear more about the importance of the UK seeking deeper engagement with key emerging powers. In outlining the Government’s approach, the Minister recognised the key role parliamentarians could play in support of this key foreign policy objective for the UK. Providing an overview of the economic considerations behind this policy, the Minister highlighted that in the next 5 years, growth in Brazil is likely to be over 90%, India 100%; China, over 120%, and in Russia, nearly 160%. He noted that as economic power was shifting towards these emerging markets, there were potentially huge opportunities for British business which would bolster prospects for national growth and prosperity.

To make the most of this opportunity, the Minister said the UK needed to reinforce existing relationships, make new links and forge stronger, new alliances. Recognising this compelling need to recalibrate our focus, the FCO was responding by shifting its network East and South, opening and re-opening embassies, consulates and trade offices and stepping up Ministerial visits. He noted this was also a Government-wide approach with UK Trade and Investment (UKTI) leading a major effort to ensure that British Small and Medium Enterprises (SMEs) receive the support they need to export to priority markets and DFID forging partnerships on development with emerging powers which are providing aid to poorer countries. Ministerial visits were an important priority in this effort, but parliamentarians too could play an important and complementary role.

BGIPU Chairman Robert Walter MP outlined how the work of the Group contributes to, and complements, the UK Government’s efforts to advance foreign relations. With specific attention to the Emerging Power countries, the Chairman noted targeted BGIPU efforts to engage with countries playing a significant and sustained role in driving global prosperity and increasingly exerting greater influence over global affairs. He noted that in recent years BGIPU have undertaken exchanges with Turkey, Chile and Indonesia and hosted recent inward visits from Bahrain and Saudi Arabia while the Group’s forward programme was pursuing bilateral exchanges with Argentina, Brazil, Egypt, Russia, Japan, Thailand and South Korea. He noted that improved understanding and appreciation of UK perspectives in the legislatures of these countries would be vital to building strong bilateral partnerships for the future. He noted the important contribution made by the FCO and UK representatives abroad in support of the BGIPU’s work.

In other presentations before a detailed Q&A session, the Director-General, Economic and Consular at the FCO, Barbara Woodward provided further advice on the main elements of the Emerging Powers strategy and highlighted the importance of expanding key ‘soft power’ components, including parliamentary visits, educational exchanges, cultural diplomacy and sporting links, to deepen engagement with emerging powers. The UK Ambassador to Mexico, HE Judith Macgregor, and UK High Commissioner to India, Sir James Bevan, outlined how individual UK missions abroad are implementing the Government’s strategy in key countries through targeted whole-of-government activities. The Trade Envoy to Indonesia, Richard Graham MP, highlighted the vital role MPs and Peers can play in expanding trade links with key emerging powers, including through the UKTI’s recently introduced special envoy roles where the long-standing commitment and contacts of prominent individuals in key markets can serve to enhance the UK’s overall profile. 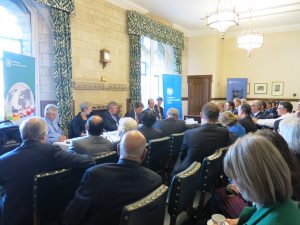 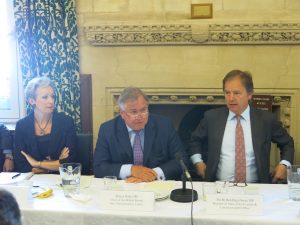 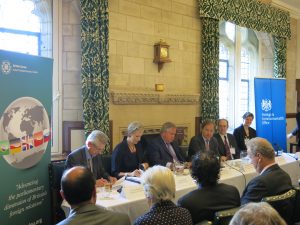