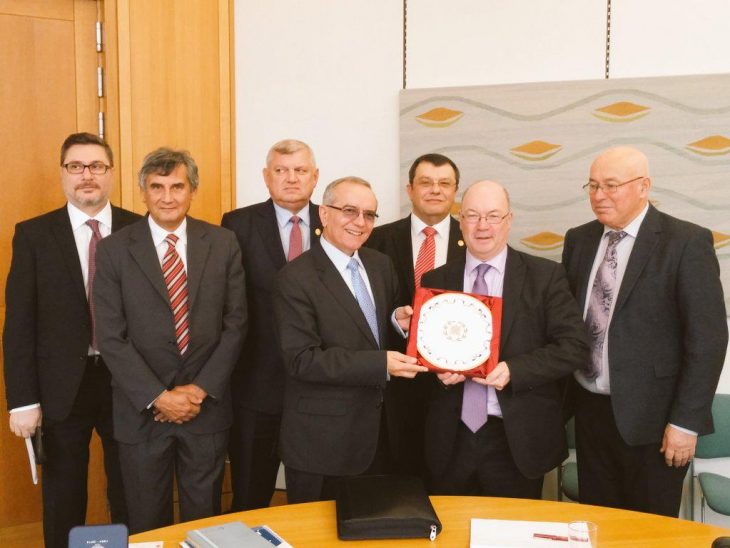 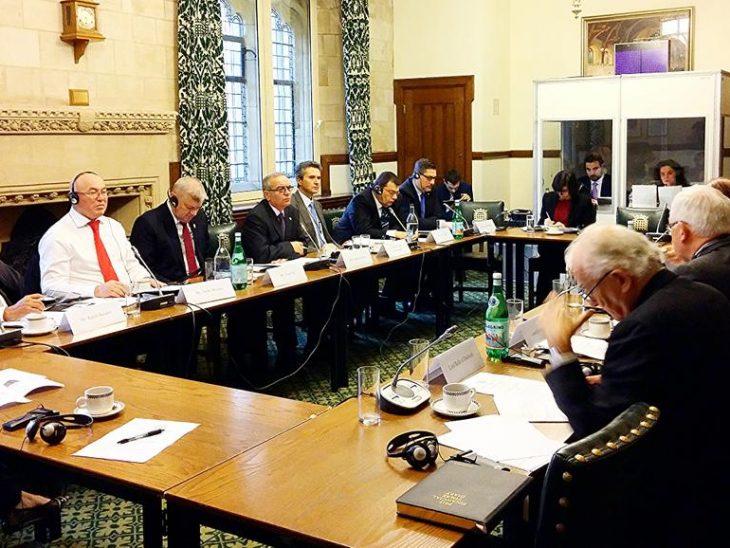 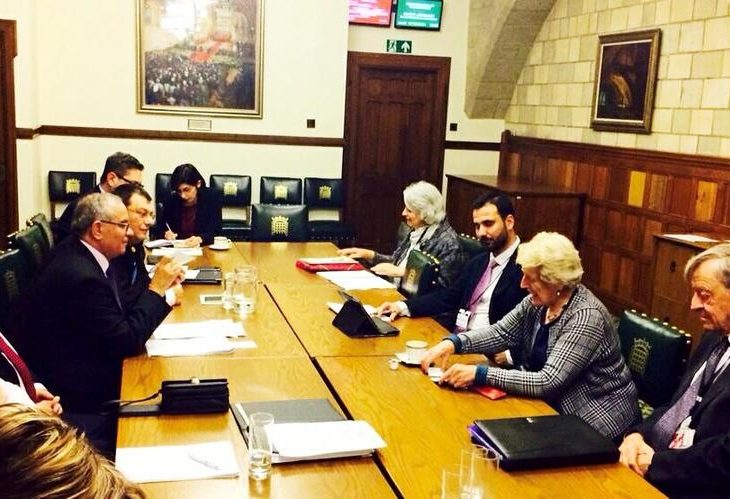 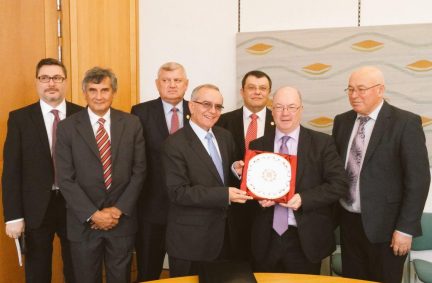 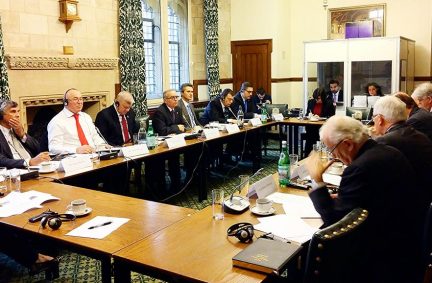 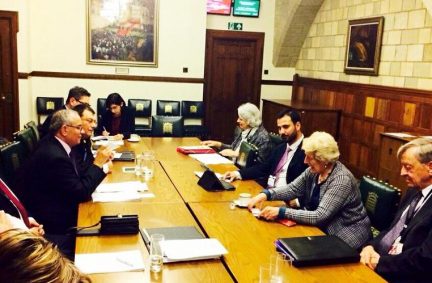 The delegation arrived on Monday 24 November and that evening the programme began with a special visit to the Romanian Cultural Centre and an opportunity to view the exhibition “The Romanian Imaginarium – An Illustrated Introduction” and meet Mr Nicolae Ratiu to discuss promotion of Romanian culture in the UK. The delegation then moved on to a working dinner with members of the BGIPU Secretariat for an overview of the work of the BGIPU and outline of the key elements and objectives of the visit.

As anticipated, the key focus of the visit was on EU cooperation and migration issues including in the first meeting on Tuesday morning when the delegation headed to King Charles Street for a meeting with officials at the FCO. After an overview of the structure of the FCO, the discussion turned to the FCOs review of EU reform. The purpose of this cross-government department analysis was to take stock of how the EU has developed over time, how it affects the UK national interests and ultimately to try to deepen public understanding of the EU. The presentation ended with an outline of how the FCO engages with parliament, which again moved quickly on to scrutiny of EU documents from Brussels.

Returning to Parliament later that morning the delegation benefitted from a comprehensive presentation on the Westminster Parliamentary system by Crispin Poyser, Clerk of the Overseas Office, followed by a discussion with BGIPU Chair, the Rt Hon Alistair Burt MP, on the complex relationship between Parliament and the Executive. The Romanian delegation were envious of the UK position, explaining that in Romania more than 70 percent of the Members were in the Government making it very challenging for the opposition to be effective.

A working lunch hosted by Romania APPG Chair, Lord Davies, with parliamentary colleagues focused on the long-standing people-to-people links between both countries and cooperation on EU issues. After a visit to the Lords Chamber, the delegation met with Lord Boswell, Chair of the EU select committee who gave an overview of the work of the committee and its 6 specialist sub committees. The discussion soon turned to the recent Presidential elections in Romania and an issue affecting many EU countries, that of a public disenchantment with the traditional political parties. Although Lord Boswell agreed the result of the recent election was a surprise he stressed the importance of demonstrating a responsible political culture where one can change between governments and cooperate between parties. They all agreed that that this apparent rejection of the political structure and the rise of ‘anti politics’ parties was apparent in many countries, not least the UK.

There was a discussion on trends towards nationalist parties in the UK and elsewhere in Europe, noting this reflected public concerns with regards immigration and the perceived threat to employment and welfare services. Lord Boswell believed the UK should not make fundamental changes to the free movement of people, as this would inevitably also affect the free movement of goods and capital, all very damaging for the UK. The recent Romanian elections also highlighted the growing influence of information technologies and social media networks in influencing political campaigns. The delegation concluded that political parties would have to be more responsive to the mood of the electorate, ensure that nationalist parties do not determine the political agenda and politicians would need to adapt to changes in political campaigning methods. The afternoon ended with a presentation by Heather Wood on the work of the Office of the Parliamentary Commissioner for Standards on the application of the UK Parliament’s Code of Conduct and related Rules that apply to Members of Parliament.

There were detailed exchanges on EU-related issues between the delegation and UK counterparts through a roundtable meeting chaired by the Chair of the Romania APPG, Lord Davies. Romania’s difficulties in absorbing EU structural funds was one key point of discussion, including suggestions of its need to look closely at other European examples, such as Ireland. Romanian MPs also indicated they strongly supported UK calls for reform of the EU although clearly the public in Romania remained strongly supportive of the EU due to the clear benefits it has provided since accession to grow and build the economy.

The possibility of EU accession for other states in Eastern Europe was also discussed with Romania keen to see its non-EU neighbours given the same opportunities it now enjoyed for the sake of future security and prosperity in Europe. Regarding recent Russian action in Ukraine, both sides agreed that resolute responses to Russia’s action, including appropriate EU sanctions and efforts to enhance NATO, were important in addressing these new challenges to peace and prosperity in Europe, including in the Black Sea region.

There was a key focus in discussions on people-to-people links between both countries, with strong recognition on the UK side of the significant contribution being made to the UK by Romanian migrants, most notably in the health and IT sectors. UK participants stressed their disappointment that the issue of free movement from Romania to the UK under EU provisions was often misunderstood and misrepresented in the UK for political benefit. The UK participants also noted, however, that Romanian authorities could act to counter some perceptions through education and cultural exchanges. Better promotion of Romania as a tourist destination for the UK public might also be useful in changing uniformed and negative perceptions.

This issue of the exploitation of Romanian migrants to the UK by unscrupulous employment agencies was also discussed, with recognition of the need to maintain the excellent working level cooperation which currently exists between law enforcement agencies in both countries. There was also clear recognition of the need to encourage joint efforts to address human trafficking and the Romanian side welcomed the opportunity to hear more on the UK Modern Slavery Bill currently before both Houses.

After a lively PMQs session and parliamentary lunch in Peers Dining Room hosted by Lord Bowness, the delegation met with Mike Gapes MP from the Foreign Affairs Committee, who began with an overview of the work of the FAC, before moving on again to the issue of Europe. Mike Gapes explained that some parts of the UK had not had the historical movement of people, and it was in these areas where tensions were rising over migrant workers in factories and non-English speaking children entering the schools. He stated that a fact often overlooked, and under-reported in the UK media was that almost 2 million UK citizens enjoy the benefits of living elsewhere in Europe under free movement provisions of the EU.

Baroness Butler-Sloss accompanied by Lord Dubs, Frank Field MP, John Randall MP and Baroness Hamwee ended the day with a discussion on their work on the Modern Slavery bill, which they hoped would enter law by May 2015. They stressed the importance of raising awareness of the public to the existence of forced labour and trafficking, affirming that the more awareness there is the more chance the police would have to tackle the issue. They also explained that they were pushing the Government on the need to support victims beyond the statutory period they are given under the EU directive. The delegation were very impressed with the initiative of Baroness Butler-Sloss and her colleagues to encourage politicians across Europe to work together on this issue, perhaps by forming regional groups, and they gave their full support of this initiative.

The final morning of the programme was spent in private discussions with the Ambassador at the Romanian Embassy, before heading to a working lunch with members of British Expertise and the Romanian Chamber of Commerce, hosted by the UK Ambassador to Romania, Mr Paul Brummell. The discussion focused on structural EU funds, their absorption rate in Romania and the need to understand the system in order to work around the red tape and bureaucracy. They also discussed Public-Private partnerships and lobbying. The visit was completed with a detailed discussion with academic staff and students at the University College London’s School of Slavonic & East European Studies (UCLSSEES) and a discussion on education and people-to-people exchanges with the British Council.

BGIPU were very grateful for the invaluable support of the Ambassador, HE Ion Jinga, and staff of the Romanian Embassy in London in supporting this visit. BGIPU has subsequently been invited to undertake a return inter-parliamentary visit on a reciprocal basis in 2015. 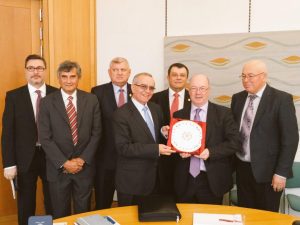 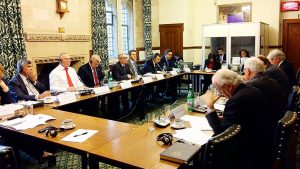