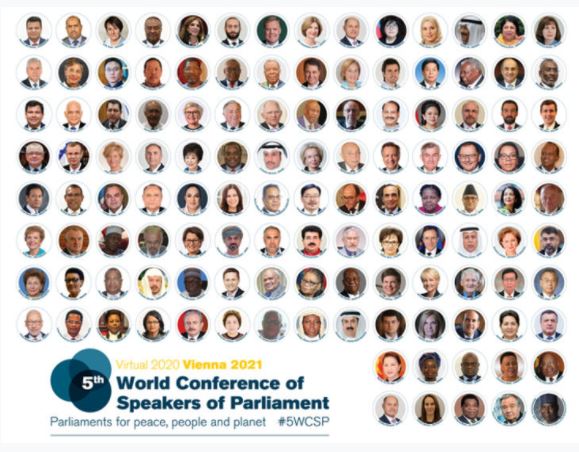 The overall theme was Parliamentary leadership for more effective multilateralism that delivers peace and sustainable development for the people and planet.

Press release by the IPU 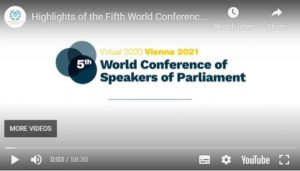 Over 100 of the world’s top legislators took part in the virtual Fifth World Conference of Speakers of Parliament on 19 and 20 August 2020, under the overall theme of Parliamentary leadership for more effective multilateralism that delivers peace and sustainable development for the people and planet.

The Conference was organized by the IPU in partnership with the Parliament of Austria and the United Nations. Originally planned to take place in Vienna, Austria, the physical conference has been postponed to 2021 due to the COVID-19 pandemic.

The Speakers were joined by other members of parliament, diplomats, scientists and representatives of multilateral organizations to discuss international parliamentary cooperation to address the challenges facing a COVID-19 world, including access to health, social and economic inequalities and the climate emergency.

IPU President Gabriela Cuevas said: “We convene as crisis and opportunity, despair and hope, converge into an unknown that is affecting every single inch of our lives. This is not only a test of our endurance to withstand the current perils. It is also an opportunity to make the best of our wisdom; to chart a path towards a future that is just and fair, sustainable and prosperous, inclusive and compassionate. We can, and we must, build back better.”

President of the National Council of Austria, Wolfgang Sobotka, said: “As guardians of democracy and the rule of law, parliaments have a key role in meeting the current challenges. It is therefore crucial that we also see the coronavirus pandemic as an opportunity to acknowledge the great value and strength of a functioning parliamentary democracy.”

United Nations Secretary-General António Guterres said: “How fast we emerge from this crisis will depend not only on the solidarity we show within our communities and our countries, but also on the degree to which governments, scientists, businesses and of course parliaments can cooperate together across borders and continents. This is the meaning of multilateralism. It is not an ideology; it is simply a methodology, the best one we have, to deal with truly global challenges.”

The Speakers of parliament heard directly from some of the most important scientists and economists in the world today, including Sarah Gilbert, who heads the group developing a COVID‑19 vaccine at Oxford University; Phoebe Koundari, professor at Athens University of Economics and Business and president-elect of the European Association of Environmental and Resource Economists; and Jeffrey Sachs, professor of economics and director of the Center for Sustainable Development at Columbia University and director of the UN Sustainable Development Solutions Network.

These experts urged the legislators to hold their governments to account in their health and economic responses to the pandemic. They called for parliaments to listen to the science, to allocate more money to strengthen public health, to support health-care workers, and to invest in greener research.

Several Speakers issued a clarion call for emission reductions and efforts towards a carbon-neutral economy. They stressed that parliaments have the power and duty to translate key international commitments – like the Paris Agreement on climate and the 2030 Agenda for Sustainable Development – into national legislation and policy.

The conference also included a special session on countering terrorism and violent extremism on the eve of International Day of Remembrance and Tribute to the Victims of Terrorism on 21 August. Parliamentarians heard from Imrana Alhaji Buba, a survivor of terrorism who went on to found Youth Coalition Against Terrorism, a youth organization working against violent extremism in north-eastern Nigeria.

At the end of the conference, the Speakers adopted a political declaration setting forth their commitment to robust parliamentary action for a safer, healthier and more prosperous world. The Declaration will be presented to the President of the United Nations General Assembly.

Preceding the Speakers’ Conference, the IPU brought together the world’s top women legislators in the virtual 13th Summit of Women Speakers of Parliament on 17 and 18 August. Efforts on gender equality are needed in parliaments, as currently only 20 per cent of the Speakers of parliament in the world are women. The participants pledged action to step up gender equality in all walks of life, building on the 25th anniversary of the Beijing Declaration and Platform for Action. The summit focused specifically on climate change, women’s economic empowerment, and preventing violence against women and girls.

The World Conference of Speakers of Parliament takes place every five years. Organized in cooperation with the United Nations, its objective is to reinforce the parliamentary dimension of global governance.

Discover what the most senior figures in parliament have to say in our Speaker Soundbites video series. 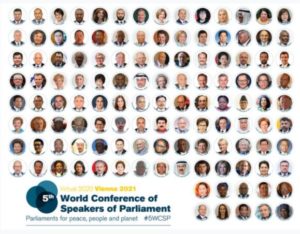 The overall theme was Parliamentary leadership for more effective multilateralism that delivers peace and sustainable development for the people and planet.