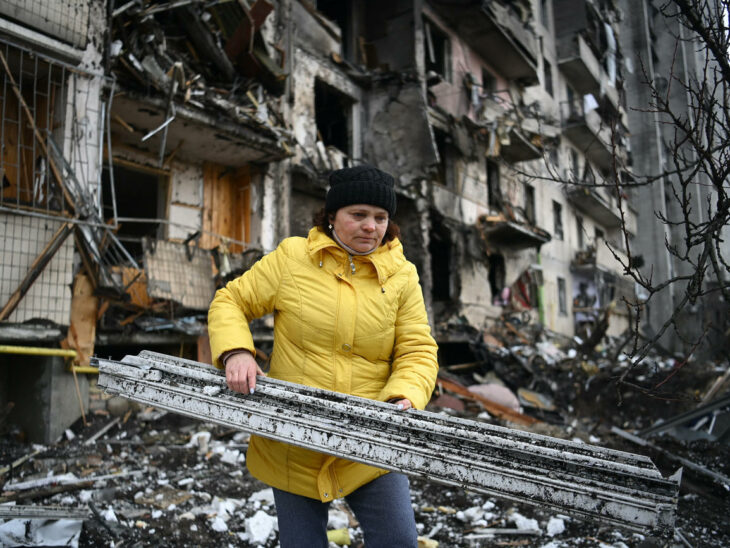 A woman clears debris at a damaged residential building at Koshytsa Street, a suburb of the Ukrainian capital Kyiv, hit by a military shell on February 25, 2022 during Russia's invasion of Ukraine (Photo by Daniel LEAL / AFP)

Statement – We stand with the people of Ukraine. We express solidarity with our parliamentary brothers and sisters from the Verkhovna Rada, the Ukrainian parliament, a fully-fledged Member of the IPU since 1999.

We, the members of the IPU Executive Committee, condemn in the strongest possible terms the Russian Federation’s invasion of Ukraine. It must stop now.

We deplore the catastrophic loss of life and human suffering, especially for the displaced people, including women and children, desperately trying to find somewhere safe for their families. We fear the devastating consequences for the people of Ukraine in particular but also for the people of the Russian Federation and the whole world.

We are especially concerned about the impact of the invasion on the women and girls of Ukraine. Armed conflict has a disproportionate impact on women and girls with greater risks of sexual violence and other forms of human rights abuse. We also emphasize that women are key to peace, and they must have meaningful participation in the resolution of conflict and post-conflict socio-economic recovery.

In that respect, we stress the continuing relevance of the 2019 Belgrade Declaration “Strengthening international law: Parliamentary roles and mechanisms, and the contribution of regional cooperation”, endorsed at the 141st IPU Assembly in Serbia, in which the IPU membership agreed to “uphold its dedication to peace, and underscore that international law is the bedrock of a world order based on solidarity and cooperation.” Indeed, disputes and disagreements must be addressed on the basis of international law.

The IPU was founded in 1889 at a time when war was the normal way to settle any disputes. However, our visionary founders believed that a more peaceful international order was possible if countries could settle their differences through dialogue and not war. In 2022, the IPU’s foundational values have never been more relevant and we expect all members of the IPU to respect them.

We appeal to the members of both houses of the Russian Parliament to assume their responsibility before history, to join efforts to bring about a cessation of hostilities and seek a diplomatic solution to the conflict through meaningful dialogue. It is the duty of parliamentarians to always advocate for peace rather than promote war.

We urge President Putin to bring an immediate end to the ongoing attacks on the territory of Ukraine. We call on all the countries concerned to keep diplomatic channels open with the Russian Federation to agree to a ceasefire forthwith.

The IPU can be part of the solution and would be pleased to contribute to all diplomatic efforts at the parliamentary level taking into account the broader historical and cultural context. We call on all countries to respect the principles of non-interference and peaceful co-existence. 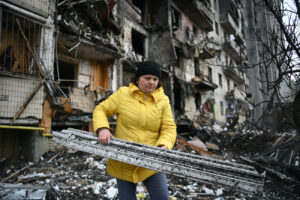 A woman clears debris at a damaged residential building at Koshytsa Street, a suburb of the Ukrainian capital Kyiv, hit by a military shell on February 25, 2022 during Russia's invasion of Ukraine (Photo by Daniel LEAL / AFP)