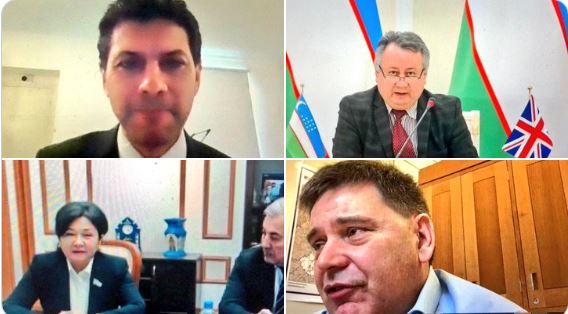 On 15 December, BGIPU hosted a bilateral meeting between parliamentarians from the UK and Uzbekistan. The meeting was co-chaired by Alex Sobel MP, BGIPU Treasurer, and Andrew Bridgen MP, Uzbekistan APPG Chair.

On 15 December, BGIPU hosted a bilateral meeting between parliamentarians from the UK and Uzbekistan. The meeting was co-chaired by Alex Sobel MP, BGIPU Treasurer, and Andrew Bridgen MP, Uzbekistan APPG Chair. They were joined by The Lord Bowness CBE DL, Catherine West MP, Nigel Mills MP, The Lord Balfe, The Lord Sheikh, The Baroness Stern CBE and Mark Menzies MP.

The discussion centred around the current situation in both countries responding to the COVID-19 global pandemic and the subsequent economic impact. Members of the UK Parliament were pleased to hear that Uzbekistan had managed to contain the infection through strict measures which had enabled them to prevent an estimated 99% of the population from contracting the virus. Moreover, Uzbekistani members said robust economic support measures had also allowed Uzbekistan to end the year with positive GDP growth. They attributed their success to the large-scale political and economic reforms which they have undergone over the past few years, along with close engagement with civil society and NGOs, and recognising the important role played by the media. They stressed the role of parliament, which had functioned every day during the pandemic, in providing social measures to contain the virus, and were interested to hear about the role of the British Parliament.  UK members outlined the state of play in Britain responding to COVID-19 and efforts to maintain Parliament’s active role in the UK response.

UK Members congratulated Uzbekistan on its election to the United Nation’s Human Rights Council, noting the UK too was elected recently. Uzbekistani parliamentarians emphasised Uzbekistan’s desire to take a leading role in the Central Asia region and to use this accession to build on the progress which has already been made. Uzbekistan has an extremely young population with 70% of citizens under the age of 30 which presents both challenges and opportunities. The young population is keen to drive forward modernising reforms; however, Uzbekistan must continue to find enough employment for the large proportion of the population which enters the workforce each year. The Uzbekistan side was keen to hear from younger UK Members about their views on this, and both sides hoped to explore this more in future talks.

Strong interest and engagement from both sides in the UK-Uzbekistan bilateral relationship was evident through the large numbers of parliamentarians attending the meeting from both sides.  All participants expressed a desire for the relationship to continue to flourish and hoped for further political dialogue with Mr Safoev saying the Oliy Majlis would very much welcome a UK delegation to visit Tashkent whenever possible in 2021.

UK and Uzbekistani parliamentarians were grateful for the opportunity to exchange ideas and learn from one another during these uncertain times and with a vaccine in the final stages of trial in Uzbekistan and one being rolled out in the UK, there is hope that a physical visit exchange could be feasible in the near future. However, in the meantime, BGIPU was very happy to assist and work with APPG members and the UK Embassy in Tashkent to facilitate further virtual exchanges in order to strengthen this important relationship. 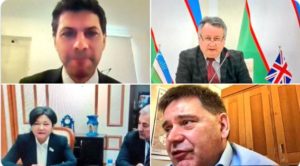 On 15 December, BGIPU hosted a bilateral meeting between parliamentarians from the UK and Uzbekistan. The meeting was co-chaired by Alex Sobel MP, BGIPU Treasurer, and Andrew Bridgen MP, Uzbekistan APPG Chair.