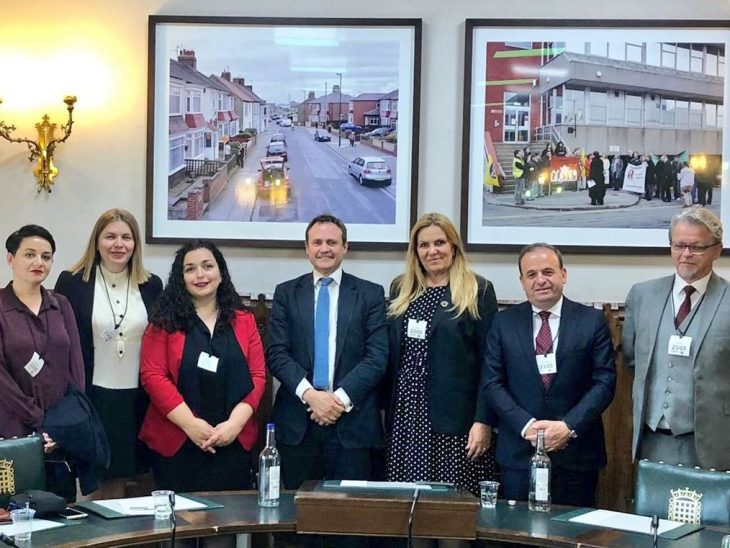 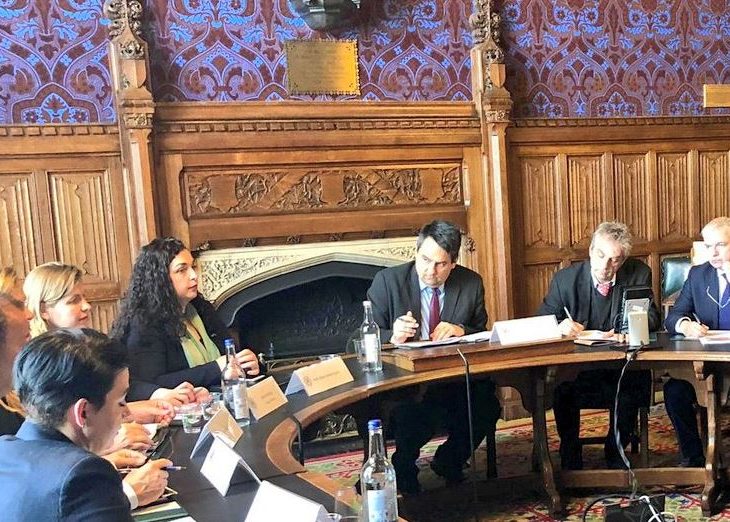 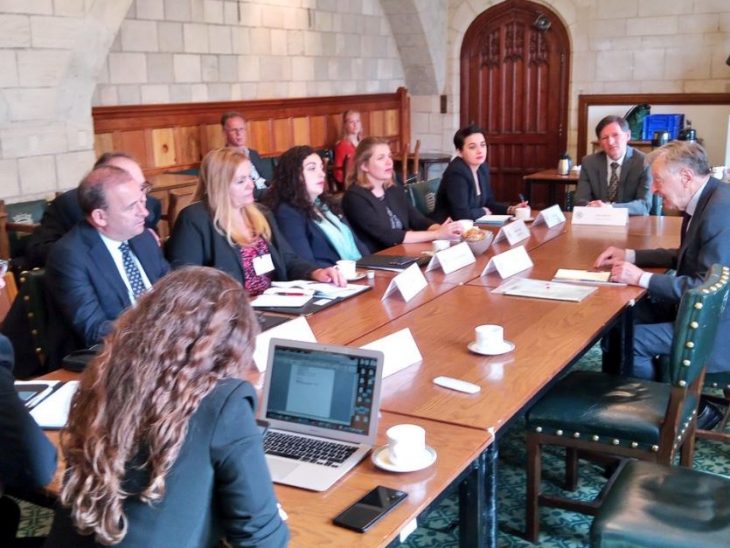 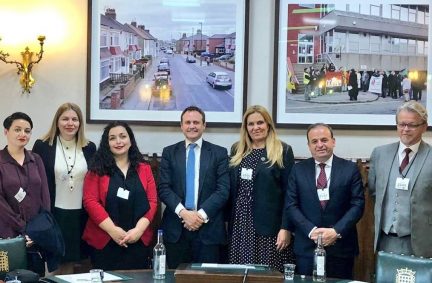 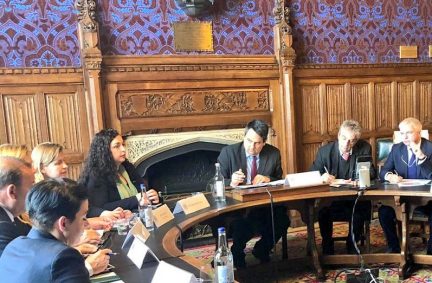 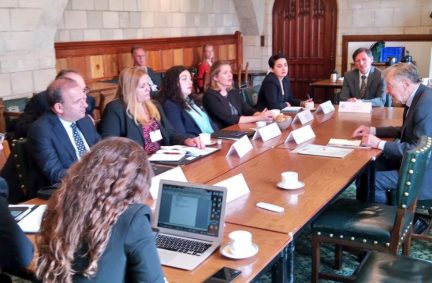 From 22nd-23rd May BGIPU hosted a parliamentary delegation from the Republic of Kosovo, led by the Chairwoman of the Committee for Foreign Affairs, Diaspora and Strategic Investment, Professor Vjosa Osmani-Sadriu from the Democratic League of Kosovo (LDK). She was joined by the First Vice Chairperson, Time Kadrijaj from the Alliance for the Future of Kosovo, Dukagjin Gorani from Grupi i Deputeteve te Pavarur, Elmi Reçica from the Democratic Party of Kosovo, and Fitore Pacolli-Dalipi from the Movement for Self-Determination. During the visit there was a key focus on Kosovo’s aspirations for EU accession and its quest for further social development particularly through education.

The delegation’s visit commenced with a meeting with Sir Alan Duncan, Minister of State for Europe and the Americas at the Foreign and Commonwealth Office, where they discussed the UK government’s policy priorities regarding Kosovo. They arrived at Parliament to meet Matthew Hamlyn, Clerk of the Overseas Committee who gave an overview of the Westminster system and outlined the current political situation, particularly regarding Brexit. As the delegation comes from a state which sees EU membership as a key step towards futrue peace and prosperity, it found Mr Hamlyn’s presentation on the progress of Brexit and the current political climate in the UK very valuable, but also perplexing.

After this, the delegation attended Prime Minister’s Questions where the robust debate provided the group with an opportunity to hear the uniquely British way members hold the Prime Minister directly to account. The delegation was then hosted by Lord Bowness over lunch, who was joined by Rt Hon Lord Robertson of Port Ellen (Former NATO SG), Madeleine Moon MP (NATO PA President), Mark Pritchard MP (OSCE PA Special Representative to SE Europe), Baroness Barker and BGIPU Executive Committee member, Chris Matheson MP, for more informal discussion about bilateral and cultural relations, inter-parliamentary engagement on regional affairs in the Western Balkans and political developments in both Kosovo and the UK.

After lunch the delegation met with Stephen Twigg MP, Chair of the International Development Committee, along with Committee Member, Mark Menzies MP. This was a particularly productive meeting focused on social development. The delegation outlined the current situation in Kosovo with challenges posed by high levels of unemployment and the risk of social instability. They then went on to highlight examples and opportunities where they felt that the UK and other foreign governments could help Kosovo through investment and by lending greater support on the world stage. The delegation regretted the ongoing lack of progress and reconciliation with Serbia and how this held back the nation. One delegate highlighted the importance of education, suggesting that greater integration in schooling would address some of the more deep-seated social problems. Whilst they admitted that reconciling Serbia remained a huge challenge, the more that education and social interaction could advance integration for future generations, the better the prospects for peace.

This meeting was followed by a conflict resolution meeting with Labour Peer, Lord Dubs who discussed the Northern Ireland peace process and its pros and cons as a model for peace and reconcilliation between communities seperated bu conflict.  He invited the delegation to draw parallels and reflect upon differences of his experiences in the Good Friday peace process with the Kosovan situation. While outlining the specific differences between the conflicts, the delegation accepted that there could be valuabe lessons to be learned as well.  More broadly, they also appreciated hearing Lord Dubs’ observations as a very experienced parliamentarian on the state of politics in the UK and in Europe, more broadly.

Following on from this, the delegation participated in a Roundtable Discussion on Kosovo which was chaired by John Grogan MP, co-chair of the APPG on Kosovo. Mr Grogan was also joined by the Earl of Sandwich, Lord Hylton, David Drew MP, later joined also by APPG Chair Martin Vickers MP. The roundtable discussion focused on the vital importance of the UK’s continuing support for Kosovo against the backdrop of Brexit and how that reality would change the dynamics in Europe. They also discussed the continuing tensions in relations betwwen Serbia and Kosovo underscoring the view that talk of land swaps was unhelpful and problematic.  The visiting delegation emphasised the importance of reconcilliation with Serbia being best achieved by responding to the needs and hopes of Serbs within Kosovo and saw this as key to achieving Kosovo’s eventual EU accession.  Theu also emphasised the vital importance of unanimity and equal treatment in the accession process, highlighting the dangers if the EU offerred differentiated deals and varied accession dates to countries and how this placed at risk the future stability of the Western Balkans.

UK members reflected on their regular recent visits to the region and stressed the importance of Kosovo developing a stronger economic base to attract foreign investments and grow job opportunities. John Grogan MP highlighted the closeness of people to people links between the UK and Kosovo as he led the delegation to a Welcome Reception in the IPU Room.  The welcome reception had a focus on the spirit of football to draw people in both our countries together, highlighting the upcoming European Championship qualifier games between England and Kosovo taking place in Southampton in September and Pristina in November. Fittingly, Former Sports Minister, Richard Caborn and former England and Leeds United player, Brian Deane attended the reception, along with future British-Kosovan star and recent Doncaster Rovers debutant, Lirak Hassani. A number of members from the Kosovan Young Professionals in London group also attended the reception providing a valuable networking opportunities for attendees and a warm welcome to the delegation.

On 23 May the delegation met the Chair of the Foreign Affairs Committee, Tom Tugendhat MP. The conversation focussed on Kosovo’s aspirations to join the EU and the obstacles currently preventing them from doing so, including the difficulties and tensions in relations with Serbia. The discussion also explored in more detail the border disputes with Serbia and land swap proposals, as well as interference by countries wishing to stoke up tensions, during which the Kosovans warmly recognised the UK long-standing support for Kosovo in seeking international recognition, in improving relations with Serbia and addressing wider regional challenges in the Western Balkans.

At a working lunch hosted by the BGIPU Chair, Rt Hon John Whittingdale OBE MP, there were parallel discussions on Kosovo’s progress in its quest for greater international recognition, including eventual IPU membership, and its hopes for the future. The final day of their programme finished with a meeting with Lord Howell of Guildford, Chair of the House of Lord International Relations Committee, and Committee Members, Lord Hannay and Rt Hon Lord Jopling. This meeting again discussed the Kosovo-Serbia border disputes and land-swap proposals, noting the Committee’s own comprehensive report on the Western Balkans in 2018 as well as providing the Committee with an overview of Kosovo’s current political, social and economic situation. The delegation ended the meeting by reemphasising how important the UK’s support was towards Kosovo’s goal of European integration and global recognition as an independent state.

From BGIPU’s perspective, this visit was a success in consolidating the already strong bilateral relationship enjoyed between the UK and Kosovo and how these parliament to parliament links play a vital role in ensuring that bilateral relations continue to grow and adapt to changing circumstances and challenges facing both countries regionally in the Western Balkans and across Europe more broadly. 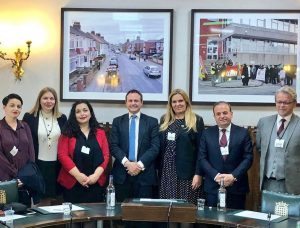 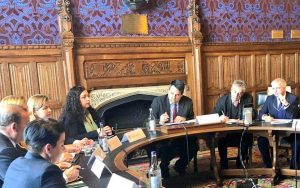 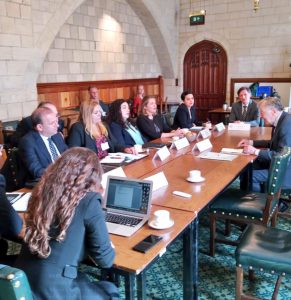