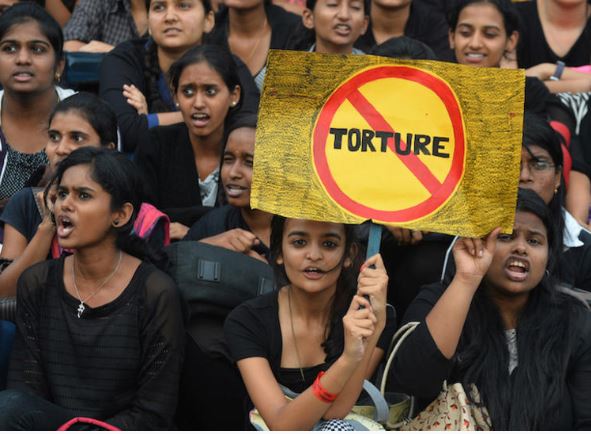 Indian college students taking part in a protest on the occasion of the UN International Day in Support of Victims of Torture. © AFP PHOTO/ Manjunath Kiran

On 26 June, the International Day in Support of Victims of Torture, the IPU calls on parliaments to use all their powers to help eradicate state-sponsored physical and psychological abuse and all other forms of serious ill-treatment.

The day also marks the entry into force 34 years ago of the Convention against Torture and other Cruel, Inhuman or Degrading Treatment or Punishment, a UN treaty which aims to prevent torture and other acts of inhuman treatment or punishment around the world. The UN treaty also includes an Optional Protocol which allows for domestic or international inspections of places of detention.

To date, 170 states have ratified the UN treaty, of which 90 have ratified the Optional Protocol. Once the Convention has been ratified, parliaments have a role in making domestic legislation compatible with the treaty’s obligations.

The IPU calls on parliaments to bring about the universal ratification of the UN treaty to ensure that its provisions become domestic law, including by clearly enshrining torture as a crime in the criminal code and establishing appropriate punishment for perpetrators. Parliamentarians can use their oversight and budgetary powers to effectively enforce anti-torture laws. They can also help by visiting prisons themselves to inspect conditions in which people are detained, as many of them already do.

Although parliamentarians can play a leading role in eradicating torture, many of them are also be victims of ill treatment. The IPU Committee on the Human Rights of Parliamentarians is currently monitoring the cases of 18 MPs around the world who have reportedly been victims of torture and abuse. 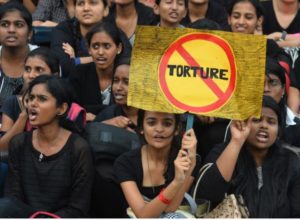 Indian college students taking part in a protest on the occasion of the UN International Day in Support of Victims of Torture. © AFP PHOTO/ Manjunath Kiran

COVID-19 and democracy: Can parliaments come to the rescue?

COVID-19 and democracy: Can parliaments come to the rescue?