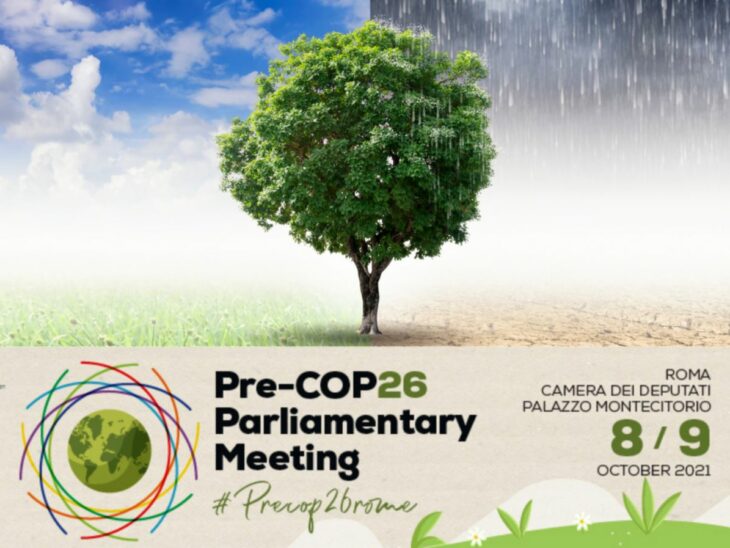 The IPU is co-organizing a Pre-COP26 Parliamentary Meeting in Rome on 8-9 October 2021 with the Italian Parliament, as part of a series of pre-COP26 events hosted by Italy.

At the Fifth World Conference of Speakers of Parliament, Ms. Xiye Bastida, an 18-year-old climate activist from Mexico, had a message for the parliamentarians present: “The climate crisis is generational injustice. And you have the power to develop smart, just and holistic legislation.”

This was a call for all parliamentarians to act, and to act now, to maximize their legislative power in reducing the risks of climate change.

Given the sheer scope of the task, legislation for climate change will take a monumental effort. It demands coordinated action across all sectors of the economy and across all of society, involving multiple governmental and non-governmental stakeholders.

To assist parliamentarians in their legislative approach, the IPU has published these helpful resources:

The Parliamentary action plan on climate change, which  focuses on what national parliaments can do to strengthen the international response to climate change.

The Policy brief: Global trends in climate change legislation and litigation: 2018 snapshot, which analyses legislative activity across the world.

The Green approaches to COVID-19 recovery: Policy note for parliamentarians, which identifies key approaches to promoting a sustainable and green recovery after the COVID-19 pandemic.

The long timeframe of climate change demands an ongoing capability to plan, implement, and commit to increasingly ambitious policies over successive political cycles. To effectively address these challenges, countries need effective institutions focused on the task, and this is ideally achieved through national framework legislation.

According to the World Bank, more than 30 countries and one regional bloc (the European Union) have adopted such framework legislation. These frameworks are overarching, multisectoral regulatory instruments that establish general principles and define the institutional approach for continuing climate change policy and implementation.

As yet, no country or regional bloc has fully integrated all twelve elements in its climate change framework legislation; however, below are some examples worth exploring:

To ensure compliance, the General Law imposes penalties for noncompliance with requirements to submit information and provides for an annual national report on climate change. The law further contains provisions for the periodic and systematic evaluation of the national climate change policy to be carried out at least every two years.

The UK’s Climate Change Act of 2008 defines the overall duties and powers of the government with respect to climate policy, establishes an independent Climate Change Committee advisory body, and clarifies the positions of key agencies. The law mandates existing institutions – the Department for Business, Energy, and Industrial Strategy; and the Department for Environment, Food and Rural Affairs – to coordinate climate change mitigation and adaptation (respectively).

The UK Climate Change Committee plays a critical role in maintaining political commitment to climate goals and adherence to the Climate Change Act. The Act requires the Committee to recommend emissions reduction targets to Parliament, advise the government on setting carbon budgets, and assess progress made in meeting them.

The Philippines’ Climate Change Act of 2009 recognizes the country’s vulnerability to climate change and the need for adaptation. The Act creates a comprehensive framework for integrating climate change with disaster risk reduction in policy formulation, development plans, poverty reduction strategies and other development tools.

Peru’s Framework Law on Climate Change of 2018 establishes an institutional framework for a coordinated response to climate change, including definition of the mandates of the Ministry of Environment, sectoral agencies, and regional and local authorities; establishment of a High-Level Commission on Climate Change to propose policy measures; and creation of the National Climate Change Commission to monitor implementation. The Law also provides for the rights and participation of indigenous stakeholders.

The IPU is co-organizing a Pre-COP26 Parliamentary Meeting in Rome on 8-9 October 2021 with the Italian Parliament, as part of a series of pre-COP26 events hosted by Italy. The meeting will be followed by a parliamentary meeting at COP26 in Glasgow on 7 November 2021, co-organized with the British Group of the IPU. 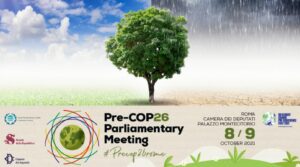 The IPU is co-organizing a Pre-COP26 Parliamentary Meeting in Rome on 8-9 October 2021 with the Italian Parliament, as part of a series of pre-COP26 events hosted by Italy.