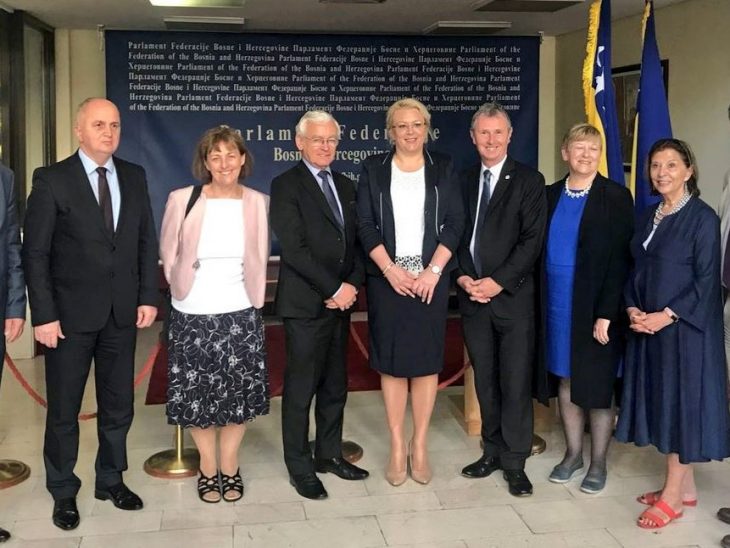 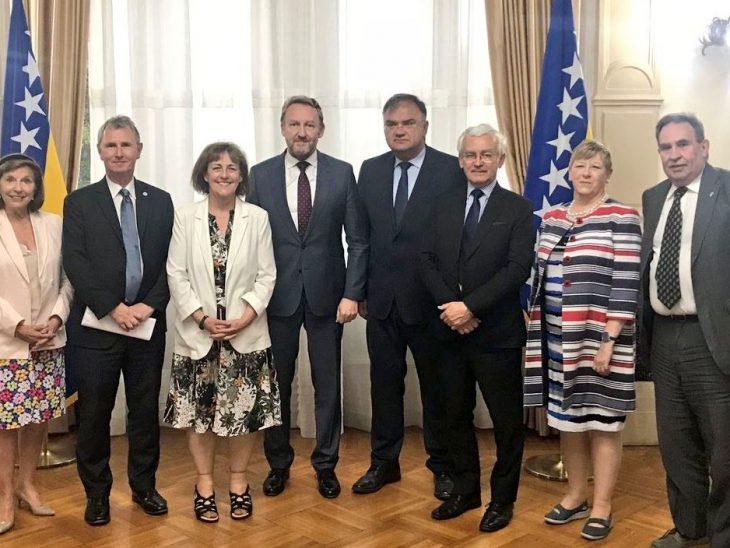 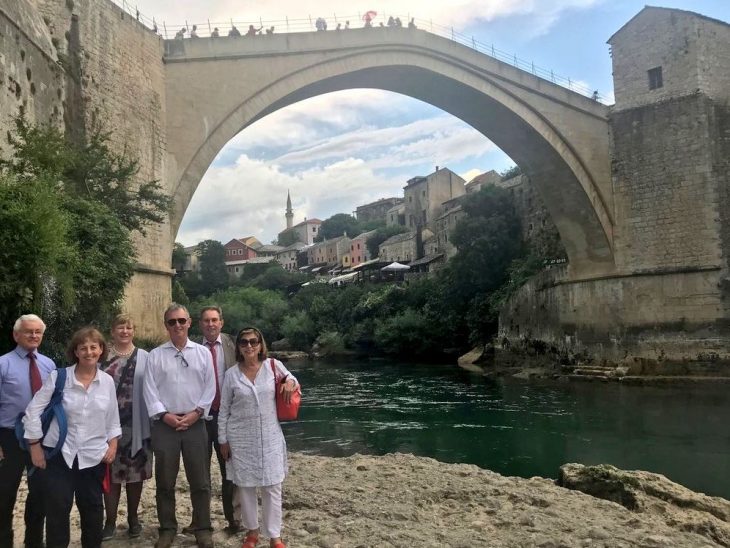 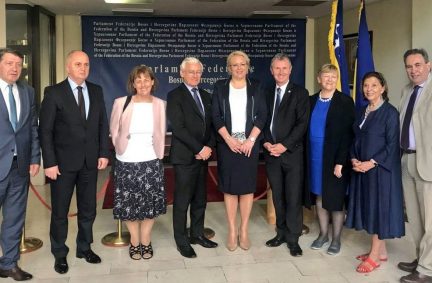 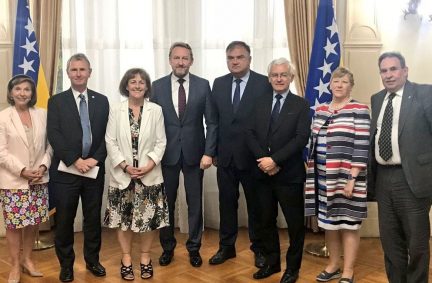 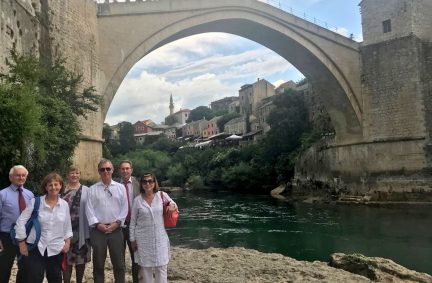 A BGIPU delegation, led by Nigel Evans MP, visited Bosnia & Herzegovina during the Whitsun Recess (27th May – 1st June) to meet with parliamentary counterparts. Nigel Evans was joined by Martin Vickers MP, David Drew MP, Helen Jones MP, Baroness Scott of Needham Market and Rt Hon Baroness D’Souza CMG. This visit consolidated the close links between the UK Parliament and the various Parliaments of Bosnia and Herzegovina, and was an important precursor to BGIPU’s upcoming International Seminar on the Western Balkans in September.

Upon arrival into Sarajevo the delegation was taken on a tour of the city, visiting the assassination site of Franz Ferdinand which sparked the First World War, and learning about the shared cultures and histories which exist within this multicultural city.  On the first day in Parliament, Nigel Evans MP met with his counterpart, Mr Nenad Lalić, who also chairs his parliament’s IPU group. He was joined by his two deputy-chairs, Mr Salko Sokolovic and Mr Predrag Kozul. There was a discussion on the UK’s departure from the EU, the Western Balkans Summit in London, and the ongoing strong relationship existing between both countries. This meeting was followed by a press conference, where it was again confirmed that the UK’s departure from the EU did not mean that the UK would cut short its bilateral and multilateral commitments and shared priorities with its European neighbours.

The delegation was then honoured to meet with the Chairman of the BiH Council of Ministers, Denis Zvizdićem, who is the equivalent to the UK’s Prime Minister. One of the recurring questions which came up over the course of the week focussed on Bosnia & Herzegovina’s complex constitutional arrangements, which are still grounded in the Dayton Accords. It was raised several times by the delegation as to whether any politician would prefer an alternative system as many seemed to point to the flaws of the constitutional arrangements, but it was noted that this was still the best system in place for Bosnia & Herzegovina.

Following this, the delegation had the privilege of meeting with two of the three Presidents of Bosnia & Herzegovina. It was of most interest to see the dynamic of a shared presidential system, and to see that there was clear cooperation and compromise being exerted by all. One of the interesting things noted by the Presidents was the rise in nationalistic feeling amongst the young people – much more than in the older generations. This is of clear cause for concern for the security and future of Bosnia & Herzegovina, when there are ethnic and nationalistic divisions growing as opposed to diminishing.

The delegation travelled to Mostar and met with the Mayor, Ljubo Beslic, and visited the Canton Assembly of Herzegovina-Neretva. These meetings focussed on the constitutional system of Bosnia & Herzegovina as the delegation continued to grapple with the complexities of the system. The delegation noted the beauty of the countryside between Sarajevo and Mostar, highlighting the potential for substantially increased tourism in the coming years for Bosnia & Herzegovina.

A visit to Banja Luka was also arranged for the delegation, where they met with the Speaker of Republika Srpska and the Mayor of Banja Luka. The delegation was able to hear about the constitutional arrangements of Banja Luka, and also hear additional perspectives on the Dayton Accords. Over lunch, the delegation met with a UK businessman who runs a local brewery in Banja Luka, in order to get an insight into the business environment from an FDI perspective. Following this, the delegation visited Ivo Andric’s house, an esteemed writer from the region, in Travnik, once more highlighting the rich cultural heritage of Bosnia & Herzegovina.

The UK Ambassador, Edward Ferguson, and the UK Embassy in Sarajevo ensured that the visit was a resounding success by introducing the delegation to many Chevening Scholars and Fellows, who all came from a variety of backgrounds. The delegation was able to meet with political analysts, aspiring politicians, journalists and so on, who gave a slightly different picture of the situation in Bosnia & Herzegovina. The main criticism levied against the political system was that power was being held by a few and it was hard for many to get access to any political capital if they were not aligned with the mainstream political status quo. It was also noted that freedom of the press and the media was limited, especially in the run-up to an election. There was concern that the current situation was not sustainable for the future of Bosnia & Herzegovina and so it was important that media freedom and parliamentary scrutiny increased in order to hold those in government to account.

The visit to Bosnia & Herzegovina was successful in highlighting the UK Parliament’s continued support and cooperation with Bosnia and Herzegovina and to the wider Western Balkans post-Brexit. It also was an important time to visit the country, given BGIPU’s upcoming International Parliamentary Seminar on the Western Balkans, where many of the same parliamentarians the delegation met with will travel to London in September to take part in this important and timely meeting. 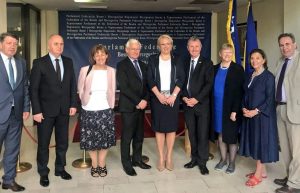 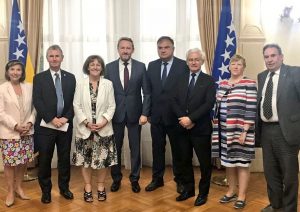 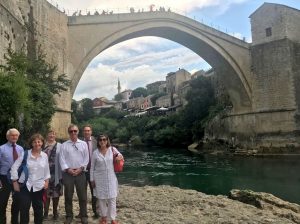