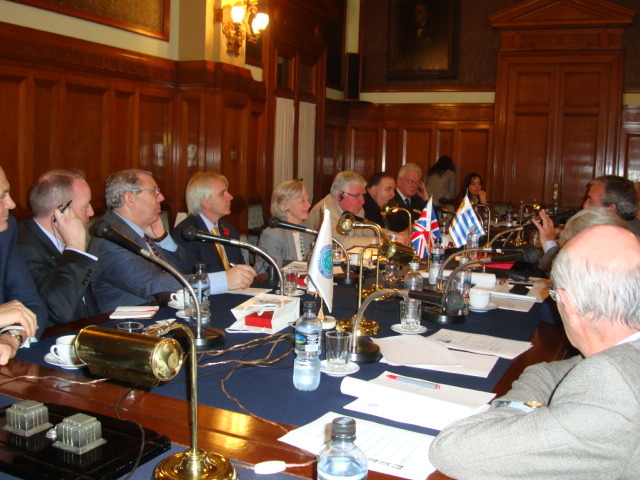 Calls for a trade agreement between the European Union and Mercosur – South America’s version of the Common Market – were top of the list in discussions between Uruguayan politicians and a visiting British delegation recently.  In a succession of meetings, they covered a wide range of issues including the provision of a base for British Antarctic Survey ships and more co-operation between universities in the two countries.

This centred on economic issues, particularly the importance of a Mercosur/EU trade agreement and the prospects of diversifying the Uruguayan economy. With an eye to future development, Uruguay has a programme of issuing a laptop computer to every child.  The next meeting was with the international affairs committees of both Houses and the Uruguay/UK Friendship Group. The Uruguayan parliamentarians made the interesting suggestion that the home port and logistic base for the British Antarctic Survey ships could be in Uruguay and that there should be a scientific and academic link between the University of Montevideo and British universities.

Climate change was also on the agenda – and the meetings in Mexico City and Cancun – and the importance of parliamentarians being involved in high level discussions on the issue.  One Uruguayan parliamentarian said that his country needed to expand its navy and to buy frigates – perhaps a sideways reference to Britain’s recent announcement of reductions in the UK defence budget. Another said that Uruguay did not have energy security and would need to investigate nuclear power.

After a brief meeting with the Foreign Minister, there was an excellent discussion at the Foreign Affairs Office with Ambassadors Nelson Chaben, General Director of the Secretariat, and Carlos Brugnini, Director Europe Region. The meeting started with a restatement of the need for an EU/Mercosur agreement.

Exports of beef from Uruguay have been greatly helped by the Argentinian tax of 30% on its meat exports. Uruguay had access to the Russian market but Japan and the Republic of Korea are closed. The fact that the US allows access to Korea and not Uruguay rankles. Uruguay’s marketing points are quality and traceability of their products, the delegation was told.

In international banking, Uruguay is still on the G20 Grey List. The tendency for the G20 to issue orders on banking transparency rather than to consult is a point of irritation. Most Argentinian money held abroad is not in Uruguay – but Argentinian unpredictability is a risk to the Uruguay economy.

Offshore oil and gas licences are being issued. Many companies are waiting for the results of initial explorations before making substantial investments.  The suggestion was made that Uruguay should co-operate further with the UK in the Antarctic. Members of the delegation agreed to contact the British Antarctic Survey on return and the leading universities on Antarctic studies, Cambridge and Southampton.

The delegation learned about Uruguay’s meat production at the National Meat Institute – there are four cows per head of population and 23 million sheep.

The delegation also had a meeting with Mr Luis Rosadilla, the Minister of Defence, who like President Mujica, is a former Tupamaro guerrilla leader.  The minister said that he appreciates the military training opportunities that the UK has provided for Uruguay but more is needed.  The transformation of the armed forces is a major task and challenge for the government, given the troubled past of the country.

On the question of Royal Navy ship visits, a new protocol is being worked on to avoid future misunderstandings following the decision to deny entry in September to the British destroyer, HMS Gloucester. The ship which was bound for the Falklands wanted to call in at Montevideo for supplies and fuel.  Uruguay’s neighbour, Argentina, has closed its ports to British warships since the Falklands war – putting Uruguay in a sensitive situation.

The delegation visited Punta del Este in the Department of Maldonado where the Mayor explained that the coastal region was vulnerable to the effects of climate change.  The Mayor was interested in contacting local councils in the EU and it was suggested that it may be worth approaching the Council of Europe’s Congress of Local Authorities.

On the way back to Montevideo, the delegation stopped at the remarkable Casa Pueblo, the eccentric home and gallery of the renowned artist, Paez Vilaro. They were fortunate to meet Sr Vilaro after seeing some of his work and were presented with his book for the House of Commons Library.

Finally, the delegation visited the Naval Museum where a display has been installed to commemorate the 70th anniversary of the Battle of the River Plate in World War Two, before going to the British Cemetery to lay a wreath of poppies. 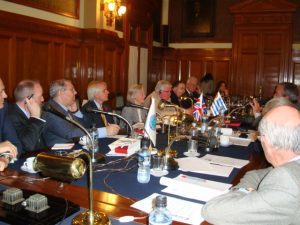